Rep. Andrew Ogles Reveals What Concessions Were Made in Battle for Speaker of the House 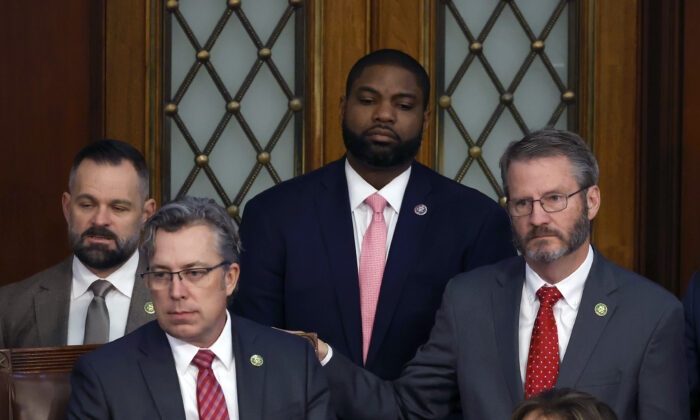 Although not yet sworn in, first-year U.S. Rep. Andrew Ogles (R-Tenn) from Tennessee’s 5th Congressional District found himself in the middle of a historic maelstrom when he arrived in Washington on Dec. 31, 2022, in the company of his family.

However, Ogles knew a bit of what he was getting into because he had already become a member of the Freedom Caucus and was already involved in the ongoing negotiations that, as of this writing, seem to have vastly reformed the way the U.S. Congress will do business in exchange for allowing Rep. Kevin McCarthy (R-Calif.) to become House speaker.

Ogles should be known to many Epoch Times readers for his participation in the unique primary debate—using domain experts instead of journalists to ask the questions—sponsored by this company in concert with the Nashville Republican Women.

Little did we know, nor probably did he, that Ogles would end up being one of the 20 to instigate this monumental change they say will return the Congress to the original intention of the Founders as The People’s House.

I spoke with Ogles by phone the night of Jan. 6, 2023, before the roll call vote during which, it was said, two of the remaining rejectionists who couldn’t accept McCarthy personally would absent themselves so that the magic number would be lowered and the new speaker could go over the top.

Apropos, Ogles informed me that what many had guessed was true. His absence from voting in a previous round also was planned. He waited to see that all was going according to plan before stepping forward to flip his vote to McCarthy after the initial round.

For Ogles, the basis of all the negotiations was to establish the rules of the game in Congress that had been altered over the years beyond recognition. As he pointed out, the rules of a game almost always determine the winner.

He shared with me a list of some of what has been roughly negotiated to date. The devil, as always, is in the details.

That’s all Ogles would tell me for now, but there is undoubtedly more in ongoing negotiations that could continue even after the final speaker vote. No word, from him anyway, on committee assignments or agreements, although there are discussions on positions for Freedom Caucus members. Ogles did acknowledge his own interest in the Financial Services Committee, due to his economic background, or the Judiciary Committee.

No word either, so far, of a different kind of Jan. 6 investigation, unless that is intended to be wrapped into the new “Church” committee.

I asked Ogles if there would be bad blood, as many are warning, after these days of heated negotiation. He denied it. The Republican majority, he said, was too small to afford that, and they all knew it.

Knowing human nature, I wouldn’t have completely believed him on that one had I not heard the resounding and welcoming applause given for every flipped vote. Many of those who voted for McCarthy were 100 percent in favor of the changes negotiated by the 20, who may well be rewarded in the history books for their initiative.

What has been going on is being referred to as “chaos” by Democrats and the media, including, regrettably, many at Fox News and other supposedly right-leaning outlets. Still, others claim this has been a victory for the “extreme right, imposing their views.”

It’s anything but. It is and has been for the last few days democracy as it should be practiced, and as it is practiced in many democratic assemblies across the world, just not, lately, in the United States.

CORRECTION: A previous version of this article contained a misspelling. The Epoch Times regrets the error.