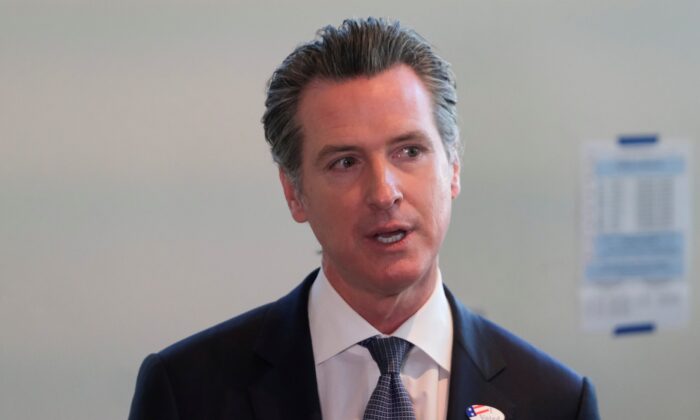 A Roman Catholic priest in California is suing Gov. Gavin Newsom over his continuing lockdowns purportedly aimed at combating the CCP virus that causes the disease COVID-19.

The lawsuit comes amid a flurry of litigation challenging government officials’ emergency powers during the pandemic.

In California, Silicon Valley pastor Mike McClure is fighting more than $200,000 in fines for keeping his church open for business, The Epoch Times has reported. Los Angeles area Grace Community Church of the Valley and its pastor, John MacArthur, are contesting efforts to shut that church down, while the local government has ordered the church evicted from its parking lot, which it leases from the county, an act the church claims is retaliatory.

Catholics and Jews are suing New York Gov. Andrew Cuomo, a Democrat, in separate federal lawsuits over his restrictions on attendance at religious services that they say violate their constitutional rights, The Epoch Times reported.

In the nation’s capital, a federal judge granted Capitol Hill Baptist Church’s request for a preliminary injunction against District of Columbia Mayor Muriel Bowser, a Democrat, allowing the congregation to resume worship services, as reported by The Epoch Times. The injunction came after the Trump administration weighed in on behalf of the church in the lawsuit over pandemic-related restrictions that limit church gatherings—even those outdoors—to 100 people.

The plaintiff in the new California lawsuit is Father Trevor Burfitt, a member of the Society of Saint Pius X priestly fraternity, which oversees churches in Kern, San Bernardino, San Diego, and Los Angeles counties, each of which has been put under restrictions during the Democratic governor’s seven-month lockdown of the state of California.

These restrictions imposed and enforced by Newsom and other officials named in the lawsuit have obstructed the rights of Burfitt and others throughout California, contrary to the state constitution, the suit states.

The lawsuit, known as Burfitt v. Newsom, was filed in the Superior Court of the State of California for Kern County.

The legal complaint seeks declaratory and injunctive relief for the constitutional violations it alleges have been committed by Newsom and his officials, stating that the “lockdown was originally supposed to be only a temporary emergency measure. However, nearly seven months later it appears that, absent judicial intervention, there will never be a ‘reopening’ to normal, pre-COVID activity, despite incontestable facts–including California’s own data … showing that the lockdown is no longer warranted and is causing far more harm than good.”

“At this point in the pandemic, it’s very hard for the state to justify their ongoing restrictions on churches,” Paul Jonna, special counsel to the Thomas More Society, told The Epoch Times in an interview. The Thomas More Society is a public interest law firm specializing in religious freedom issues.

“The shutdowns are doing more harm than good.”

“The state doesn’t have the right to tell people how to practice their faith, how to worship God.”

In the legal action, the plaintiff is asking the court to declare the state-level Emergency Services Act that the governor has been basing his extraordinary powers on to be contrary to the California constitution, Jonna said.

“Every month, the governor just decides for everyone that we’re in a state of emergency,” and renews his emergency-based authority to dictate state policy, he said.

“People call it tyranny. In a real sense, he is running the state, deciding which businesses open and close in a scheme that is very problematic. Although we have three branches of government in the state, we’re being governed exclusively by one.”

Jonna said it’s a hopeful sign that the state Supreme Court in Michigan recently struck down the emergency powers of the governor there.

The lawsuit spells out how Burfitt’s ministry has been affected.

The occupancy restriction imposed on houses of worship hasn’t been imposed on businesses Newsom has deemed “essential.” There is now a complete ban on indoor worship, imposed for the second time on July 13, which the lawsuit argues constitutes discrimination against churches in 38 counties representing 86 percent of California’s population.

A “social distance” bubble zone of six feet around every person is required, which, the suit states, precludes the proper conduct of Catholic worship.

The court needs to act because “absent judicial intervention, Gov. Newsom intends to continue indefinitely a massive and baseless suspension of the constitutional rights of Father Burfitt and nearly 40 million other residents of the state of California,” Jonna said.

“He continues to levy strict limits or outright prohibitions on public and private worship activities, which continue to be designated as ‘nonessential,’ while liquor stores, marijuana dispensaries, and the Hollywood movie industry are allowed to operate unhindered. California’s residents are apparently expected to live their lives behind makeshift ‘face coverings’ while maintaining an arbitrary distance of six feet from everyone they encounter outside their homes.

“And to complete Newsom’s despotic mandates, anyone who declines to obey faces criminal and civil penalties. This is unconstitutional and a blatant violation of the rights guaranteed by California’s constitution.”

Newsom couldn’t be immediately reached by The Epoch Times for comment on the lawsuit.