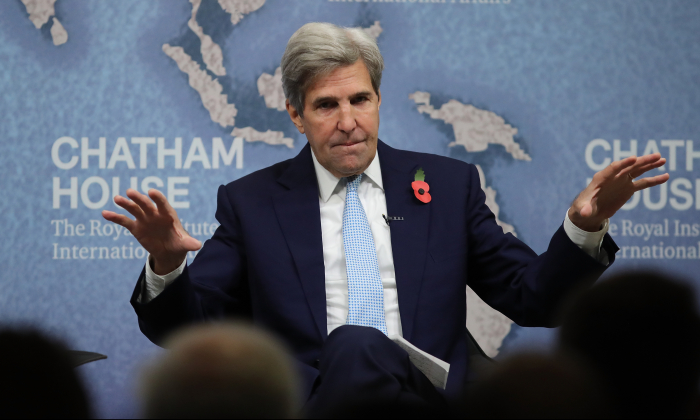 Presidential Envoy for Climate Kerry: Laid Off Oil and Gas Workers Can Work on Solar Panels

Special Presidential Envoy for Climate of the Biden administration John Kerry said Wednesday that those workers impacted by the administration’s fossil fuel policy can find jobs in solar panels or other growing industries.

Kerry, who once served as secretary of state for the Obama administration said in a White House briefing that President Joe Biden is doing what is necessary to combat climate change to eradicate the oil and gas and coal industries. And the fossil fuel workers have been “fed a false narrative” that “dealing with the climate is coming at their expense.”

“We didn’t come here to put anybody on notice except to the seriousness of President Biden’s intent to do what needs to be done to deal with this crisis,” said Kerry. “And it is a crisis, with respect to those workers, no two people are more, in this room, are more concerned about it.”

Some lawmakers disagree with the argument that there is a climate crisis.

“Sure the climate is changing, and one of the reasons is because the climate has always been changing,” Sen. Marco Rubio (R-Fla.) said in 2016 during a debate. “There has never been a time when the climate was not changing.”

In October 2018, Rubio said on CNN’s “State of the Union” that “many scientists would debate the percentage of what is attributable to man versus normal fluctuations.”

“The president of the United States has expressed in every comment he has made about climate the need to grow the new jobs that pay better, that are cleaner,” Kerry said on Wednesday.

Kerry credited the job losses and changes of the industries to the market and said workers have been misinformed.

“I think that, unfortunately, workers have been fed a false narrative,” he said. “They’ve been fed the notion that somehow dealing with climate is coming at their expense. No, it’s not. What is happening to them is because other market forces are already taking place.”

However, he didn’t elaborate on what other market forces he was referring to.

“So what President Biden wants to do is make sure those folks have better choices, that they have alternatives. They can be the people that go to work to make the solar panels, that we’re making them here at home,” Kerry continued.

On Thursday, he reacted on Twitter: “Socialist John Kerry to oil & gas workers fired by [Biden’s] ‘anti-energy’ policy: you little people can ‘go to work to make the solar panels.’ Lots of problems with that.”

The Biden administration’s opposition to the fossil fuel industry in its first few days has ignited criticism both domestically and from Canada.

Alberta Premier Jason Kenney, the partner of the Keystone XL pipeline project said the cancellation disrespects “one of America’s closest friends and allies.” He called for Biden to reconsider the cancellation.

A group of Republican legislators planned to introduce legislation to keep the project rolling.

Sen. Steve Daines (R-Mont.) alongside other senators from central and western states said on Wednesday that they plan to introduce legislation to allow the Keystone XL Pipeline to continue construction.