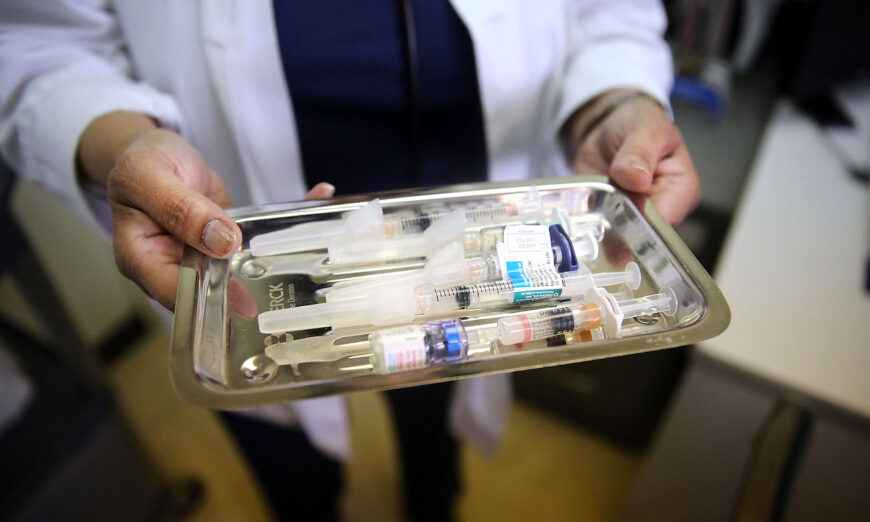 A nurse holds out a tray of immunizations in Newark, New Jersey, on Aug. 28, 2013. (Spencer Platt/Getty Images)

A study funded by the Centers for Disease Control and Prevention (CDC) has found a “positive association” between vaccine-related aluminum exposure and persistent asthma.

The study (pdf), published on Sept. 28 in the medical journal Academic Pediatrics, sought to “assess the association between cumulative aluminum exposure from vaccines before age 24 months [2 years of age]” and see whether this group of children developed asthma between ages 2 and 5.

Authors of the retrospective cohort study included current and former CDC staffers. They analyzed data from a cohort of 326,991 children who were born between 2008 and 2014 at seven medical care organizations across the United States that participate in the Vaccine Safety Datalink, a network of health groups that collaborate with the CDC in studying vaccine safety.

Overall, there was a “positive association” between vaccine-related aluminum exposure and persistent asthma, the authors said. They did not conclude that the results suggest any causative link. “[A]dditional investigation of this hypothesis appears warranted,” they added.

On its website, the CDC said that it is “not changing vaccine recommendations based on this single study, but further investigation is needed into this potential safety signal.”

In a statement to multiple outlets, the agency noted that the study “has important limitations that the authors acknowledge.” It added about the study, “We recognize these results may sound concerning to some parents, but there continues to be overwhelming evidence of the benefits of vaccines.”

The study’s lead author, Matthew Daley, said that even if a link were found between vaccine-related aluminum exposure and persistent asthma, the benefits of the vaccines are still likely to outweigh the asthma risk. But in such a case, the link could possibly prompt new work to redesign vaccines, he said.

Several previous studies didn’t find a link between aluminum-containing childhood vaccines and allergies and asthma. But other research has linked aluminum in industrial workplaces to asthma. And mice injected with aluminum suffer an immune system reaction that causes the kind of airway inflammation seen in childhood asthma.

“Based on what I consider limited animal data, there is a theoretical risk that the aluminum in vaccines could influence allergy risk,” Daley said.

The study was prompted in 2013 after the Institute of Medicine, now known as the National Academy of Medicine, called for more federal research into the safety of childhood vaccines, including their use of aluminum.

By age 2, children should be vaccinated against 15 diseases, according to U.S. recommendations. Aluminum adjuvants are in vaccines for seven of them.

The agency noted that aluminum is among the common metals found in nature and is present in air, food, and water.

Increased rates in allergies and asthma among children in the United States were noted during a 30-year period starting in about 1980, and some scientists wondered if there was a connection between that and vaccines that contained aluminum.

The CDC pointed out to STAT in an emailed statement that the increase in asthma among young children starting around 1980 is before aluminum was added to vaccines, which was around 1991.

It also told the outlet that other factors that could not be measured by the study authors could have contributed to an increase in asthma in children. These include family history of asthma, secondhand smoking, as well as other ways of exposure to aluminum or other contaminants via diet or the environment that may contribute to poor health and contribute to the child’s asthma.

“We hope that additional studies can quickly provide more clarity, but at least from the national trend data, it appears that addition of aluminum-adjuvanted vaccines do not account for the overall trends that we see,” the CDC told STAT.

Brian Hooker, the chief scientific officer for Children’s Health Defense, said that the study has conceded that “asthma [is] correlated with aluminum exposure in both children with eczema and children without eczema.”

He noted that the CDC-funded study did not compare results of the vaccinated children with children who weren’t exposed to aluminum at all in their vaccines. “A true comparison should be [done] between the maximum aluminum exposure at 2 years of age (which is about 4 mg total injected aluminum adjuvant) and a zero exposure group,” he said, reported The Defender.

Hooker cited an analysis he authored with Neil Miller, published in 2020, that showed “an odds ratio of 4.49 (statistically significant) for asthma in vaccinated children versus unvaccinated children.” He said the analysis was based on cases of vaccines in the first year of life. “The CDC seems to be confirming my results here,” he said.