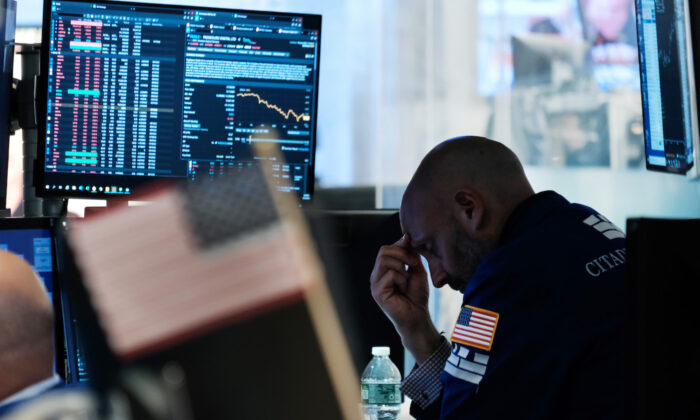 Following a 0.9 percent contraction in second-quarter gross domestic product (GDP), experts are debating if the U.S. economy has slipped into a technical recession.

Economists at the National Bureau of Economic Research, the arbiters of what defines a recession, have yet to make their formal declaration. Until then, Wall Street and Washington will be debating whether the current situation counts as a recession.

While the opinions and analyses surrounding the state of the U.S. economy are mixed, economist and investor Peter Schiff has a different perspective. The founder and CEO of Euro Pacific Capital says the United States is slumping into an “inflationary depression.”

“I think that the economic weakness is going to be so pronounced and over such a long period of time that it would not even do it justice to call a recession,” he told The Epoch Times. “I think depression is going to be a more accurate description of what we’re going to go through.”

While the country will spend most of this decade in a state of depression, “prices are going to rise much more in this decade than they did in the 1970s,” he added.

Many economic outlooks from the major investment firms and banks range from mild recession to tepid rates of growth over the next 18 to 24 months.

For example, Wells Fargo recently adjusted its base case forecast for 2023 from an economic soft landing to a mild economic downturn in the middle of next year. TD Economics penciled in an average growth rate of 1.4 percent next year.

The Federal Reserve’s economic projections (pdf) show the real GDP will grow at a rate of 1.7 percent this year and next.

Moreover, the Atlanta Fed Bank released its first GDPNow model estimate for the third quarter, which shows a growth rate of 2.1 percent.

Not too many financial experts have alluded yet to the 2008–2009 economic collapse, known as the Great Recession. But Schiff thinks that’s a mistake, comparable to what happened in 2007, when the economic forecasts only anticipated at most a moderate slowdown. That economic calamity turned into the worst financial crisis since the Great Depression of the 1930s.

According to Schiff, the current recession is going to be worse than what transpired more than a decade ago.

“I think this recession is going to be deeper and longer lasting than that one,” he said.

“Now, unemployment is going to pick up as the recession worsens. As unemployment really starts to pick up, that will put more downward pressure on the economy.”

The headline data suggest a labor market that’s still going strong, something that many public policymakers repeatedly allude to in their arguments as to why the country isn’t in a recession.

Other numbers are gradually pointing to a slowdown in the jobs arena.

Initial jobless claims climbed to their highest levels since November 2021, reaching 256,000 in the week ending July 23.

This week, economists predicted that the July jobs report will show 250,000 new jobs, well below June’s 372,000. If accurate, it would be the lowest month of job additions since April 2021.

“We’re just getting started with job losses, as they’re going to really build up over time,” Schiff said.

Did the Fed Bust Inflation?

After the consumer price index hit 9.1 percent in June, the hope was that inflation had peaked. There’s now a growing expectation that energy prices have come down by a notable amount.

West Texas Intermediate crude oil fell 9.37 percent in July on the New York Mercantile Exchange. The national average for a gallon of regular-grade gasoline and diesel tumbled 15 percent and 8 percent, respectively, from their peaks, according to AAA.

On July 27, the Fed increased interest rates by 0.75 percentage points for the second consecutive month, to a range of 2.25 to 2.5 percent. However, not everyone is convinced that will accomplish the central bank’s inflation fight.

Former Treasury Secretary Larry Summers called that “wishful thinking,” telling Bloomberg Television that “there is no conceivable way that a 2.5 percent interest rate, in an economy inflating like this, is anywhere near neutral.”

Whether this is true or not, financial markets rallied when the term was uttered.

Schiff thinks the Fed needs to do more to rein in soaring prices. Eventually, he says, the Fed will lift rates above the rate of inflation.

At the same time, Schiff says, the central bank can’t do it alone. The economy will require the federal government to cut spending.

“We need to balance the budget; deficits are too big,” Schiff said. “The Fed does not have the political courage to push back on that.

“They’re talking about quantitative tightening, but they’re not going to do it. They’re going to print more money because that’s the only way the government can finance these debts.”

Looking ahead, Schiff says that inflation will likely have peaked for a few months, and it will possibly fall to around 6 percent.

“But then, the next thing you know, it will be 10 or 11 percent,” he said. “So, we’re nowhere near the peak of the cycle because the monetary policy is still fueling inflation.”

Last week, the personal consumption expenditure (PCE) price index—the Fed’s preferred inflation gauge—surged to 6.8 percent year-over-year in June, the highest level since January 1982. The core PCE price index, which strips the volatile food and energy sectors, also rose to 4.8 percent. These figures were once again higher than what economists had anticipated.

Ultimately, the consensus is that the United States is on the path of slowing economic growth. Which direction it takes in the coming months or years, whether stagflation or recession, remains to be seen.

Whichever the case may be, “we’re reaping the consequences” of the massive pandemic-era fiscal and monetary stimulus, Schiff said.