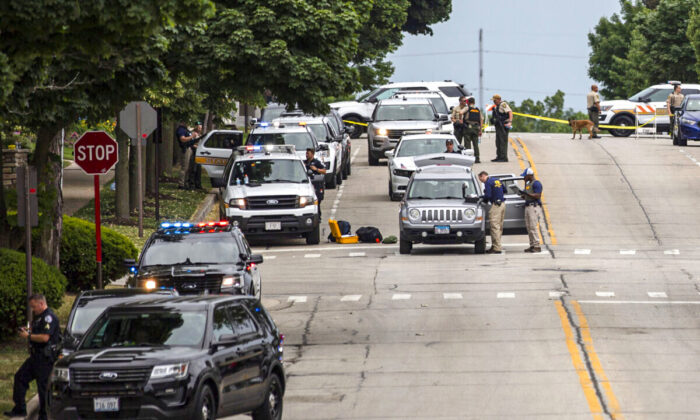 Law enforcement works the scene after a mass shooting at a Fourth of July parade in Highland Park, Ill., on July 4, 2022. (Jim Vondruska/Getty Images)
Crime and Incidents

The person of interest in the Highland Park, Illinois, July 4 parade mass shooting has been arrested, police said.

Crimo came to stop during the vehicle chase and officers were able to take him into custody.

Various videos show Crimo crawling on the ground after he stopped his vehicle at the crossroad of U.S. Highway 41 and Westleigh Road in Lake Forest. Officers approached him and arrested him.

State and federal authorities identified Crimo as the suspect of the shooting earlier in the day.

“Through law enforcement partnerships and community information and leads, a person of interest has been identified as Robert (Bobby) E. Crimo III,” the City of Highland Park said in a statement.

A photo of Crimo was released along with the statement.

Police declined to answer questions about how they identified Crimo. Before his arrest, Highland Park Police Chief Lou Jogmen warned on Monday afternoon that he could be armed and dangerous.

The city government had urged local residents in downtown Highland Park to shelter in place while the authorities continued their active investigation.

“An active investigation continues into the shooting at the Highland Park Fourth of July parade. The parade route in downtown Highland Park and the central business district remains an active crime scene; therefore, we highly recommend individuals living in this area to continue to shelter in place,” the city said in a statement at the time.

The authorities didn’t say if Crimo is the suspected shooter.

A gunman on a rooftop opened fire on the Independence Day parade in suburban Chicago on Monday, killing at least seven, wounding at least thirty, and sending hundreds of marchers, parents with strollers, and children on bicycles fleeing in terror, police said.

The suspect remains on the loose hours later as authorities continue to scour the area.

The shooter opened fire around 10:15 a.m. local time when the parade was about three-quarters through, authorities said.

Highland Park Police Commander Chris O’Neill, the incident commander on the scene, said the gunman apparently used a “high-powered rifle” to fire from a spot atop a commercial building where he was “very difficult to see.”

O’Neill said the rifle was recovered at the scene.

Police also found a ladder attached to the building.

The shooting occurred at a spot on the parade route where many residents had staked out prime viewing points early in the day for the annual celebration. Dozens of fired bullets sent hundreds of parade-goers, some visibly bloodied, fleeing.

They left a trail of abandoned items that showed everyday life suddenly, violently disrupted: a half-eaten bag of potato chips, a box of chocolate cookies spilled onto the grass, a child’s Chicago Cubs cap.

Dr. Brigham Temple, medical director of emergency preparedness for NorthShore University Health Center, said the Highland Park hospital received 26 patients after the attack and all but one had gunshot wounds. Their ages ranged from 8 to 85, and Temple estimated that four or five patients were children.

He said 19 of them were treated and discharged. Others were transferred to other hospitals, while two patients, in stable condition, remained at the Highland Park hospital.