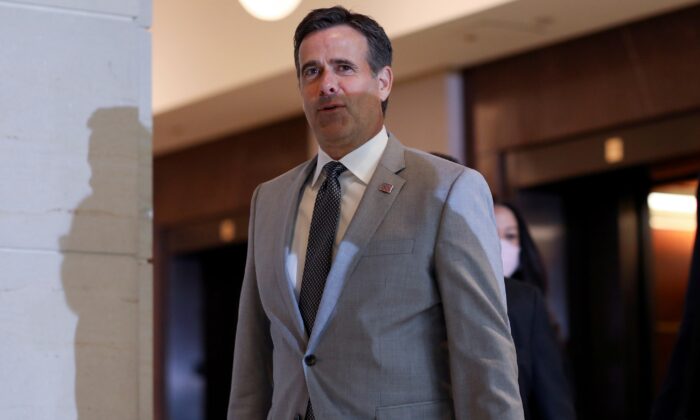 Pentagon’s Report Will Contain More Information on UFOs Than Previously Made Public: Ratcliffe

“There are a lot more sightings than have been made public,” former Director of National Intelligence John Ratcliffe told Fox News host Maria Bartiromo on March 19. He added that he wanted to have that information declassified and made public before he left office but it wasn’t possible in that short amount of time.

“Some of those have been declassified. And when we talk about sightings, we are talking about objects that have been seen by Navy or Air Force pilots, or have been picked up by satellite imagery that frankly engages in actions that are difficult to explain,” he added. “Movements that are hard to replicate that we don’t have the technology for. Or traveling at speeds that exceed the sound barrier without a sonic boom.”

The intelligence official’s comments come almost a year after the Pentagon released three videos of “unidentified aerial phenomena,” in which U.S. Navy aircraft cameras show objects that are moving at unexplainable speeds and leave the pilots confused.

In response to the pentagon’s videos, former Sen. Harry Reid (D-Nev.) who pushed for investigations into UFO’s sightings, wrote that the videos “only [scratch] the surface” of what is known by the federal government.

“I’m glad the Pentagon is finally releasing this footage, but it only scratches the surface of research and materials available,” wrote Reid on Twitter. “The U.S. needs to take a serious, scientific look at this and any potential national security implications. The American people deserve to be informed.”

The Department of Defense (DoD) did not immediately return a request for comment.

“When we talk about sightings, the other thing I will tell you is, it’s not just a pilot or just a satellite, or some intelligence collection,” Ratcliffe continued. “Usually, we have multiple sensors that are picking up these things, and so again some of these are just unexplained phenomenon, and there are actually quite a few more that have been made public.”

Ratcliffe added that observers try to find scientific explanations for what they may be seeing but sometimes it defies what is technologically possible.

“Weather can cause disturbances, visual disturbances,” he said. “Sometimes we wonder whether or not our adversaries have technologies that are a little bit further down the road than we thought or that we realized. But there are instances where we don’t have good explanations for some of the things that we have seen.”

Bartiromo told the audience during the interview that the DoD is set to release the declassified report on UFOs by June 1.

The funding for the report was tucked into the $2.3 trillion COVID-19 relief and government spending bill in which there is a provision requiring the Pentagon’s UAP (Unidentified Aerial Phenomena) Task Force to release declassified information to the Senate Intelligence Committee about their current intelligence on advanced aerial threats from UFOs or “anomalous aerial vehicles.”

“The newly enacted Intelligence Authorization Act incorporates the Senate Intelligence Committee’s report language calling for an unclassified, all-source report on the UAP phenomenon,” Christopher Mellon, former deputy assistant secretary of Defense for Intelligence during both the Clinton and Bush administrations, said on Twitter. “This was accomplished in the Joint Explanatory Statement accompanying the bill.”