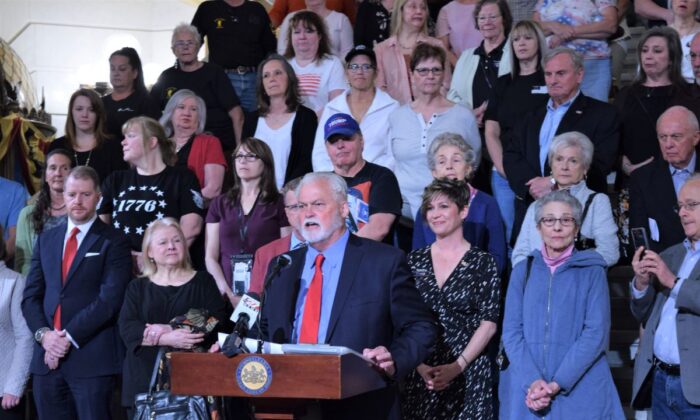 Representatives from more than 70 political activism groups in Pennsylvania are demanding that their legislators repeal no-excuse mail-in voting and secure the commonwealth’s election processes. Many of them gathered at the capital in Harrisburg on May 11.

Leaders from each group signed an “election integrity declaration” calling for the legislature to return the law to in-person voting on election day, with the exceptions noted in the election code as it read before the implementation of Act 77 in 2019. It also asks that voters be required to provide photo identification, proof of U.S. citizenship and state residency, and that the state use hardcopy paper ballots.

The group representatives delivered copies of the declaration to the office of every state lawmaker.

“In 2019, this Legislature, under Republican control, enacted a law that brought us to mail-in voting in Pennsylvania,” said Sam Faddis of Unite PA in a speech at the capital rotunda.

“We did not ask for them to do that. They did not consult with us before doing that. They simply imposed that change, despite the fact that mail-in voting has been regarded, forever, as a gift to those who want to engage in electoral fraud and election theft,” Faddis said, adding that Act 77 then got worse after the state Supreme Court and then-secretary of state got their hands on it.

Act 77 created a new option to vote by mail without needing an excuse, which had previously been required for voters using absentee ballots. It also allowed for a 50-day mail-in voting period, the longest vote-by-mail period in the country; extended the deadline to register to vote from 30 days before an election to just 15 days; and extended mail-in and absentee submission deadlines from the Friday before an election to 8 p.m. on Election Day.

“In 2020, we paid the price for that with an election filled with all sorts of irregularities and allegation of fraud. That election remains in dispute to this day,” Faddis said, noting that the implications of a disputed election are felt nationally.

The May 11 gathering in Harrisburg was the result of organization efforts by Faddis to unite the many like-minded political groups operating in Pennsylvania.

In April, people in leadership from 44 separate right-leaning political groups that respect the U.S. Constitution met in Allentown to organize around election integrity laws. The groups included Moms for Liberty, Council of American Patriots, Lehigh Valley Tea Party, Women for Trump East PA, We the People 4 PA, Audit the Vote PA, Grassroots Unite PA, Berks County Patriots, and many others.

During the meeting, they created and unified around the declaration that demands changes to election law. In the weeks that followed, more groups joined the effort. Now, the movement has more than 70 participating organizations.

With just days before the May 17 primary, nothing has been done to address the issues, Faddis said in his rotunda speech, and Pennsylvania will go into the next election with the same broken mechanisms that were used in 2020.

“We are done asking. We are done requesting. We are demanding and we are telling you, as the people from whom all power derives, that you will change this.”

Tabitha Valleau of Free PA spoke about the significance of more than 70 politically engaged groups acting as one.

“Every elected representative in Pennsylvania should be terrified,” Valleau said. “We the people of the Commonwealth of Pennsylvania have united. That has been our biggest deterrent on this journey to getting anything accomplished—so many small and large groups not working together.”

But as a united voice, she says, elected officials—who work for the people—will now be able to hear the demands to do something to fix Pennsylvania’s election system.

The local groups have been in constant contact with their communities more than elected officials, she said.

“We take the phone calls. We hear the frustrations of the electoral process in Pennsylvania. They are sitting in their cushy offices here, listening to leadership and doing as they are told by leadership, while we are the ones dealing with the community,” Valleau said.

Although the cooperating groups are right-leaning, Republicans should not assume they are safe from the scrutiny of these 70 groups and all their members, which together, cover most of Pennsylvania, group leaders said. They are prepared to actively work to vote people out of office.

“This group stands as one and we will do whatever it takes to replace anyone who does not stand with the people,” Valleau said. “You are either with us, or you are against us. And that will determine how long you are employed by the Commonwealth of Pennsylvania.”

After the speeches, representatives from the various groups signed the declaration. Those from the western part of the state who were not present signed electronically.  They were not professional politicians, but rather mothers and grandmothers with purses slung over their shoulders and some men in suits, others in jeans and T-shirts.

The Democratic Party is more organized than the Republican Party, Valleau told The Epoch Times after the event. Democrats tend to share the same talking points and stick to them.

Republicans have many groups but typically stay in their own spheres of influence.

“Where we have failed is taking all those amazing, constitutionally sound groups and bring them together to have one loud voice,” Valleau said.

Working together, they can have more influence and power to elect their preferred representatives, she said.

“They can no longer sit by, hold a press conference, say they are going to do something, or put something on a mailer for a campaign, and do nothing about it, because we are actually going to hold them accountable. We have the momentum, and now the reach, as one giant group.”

Valleau said they welcome more groups to join the movement, which at this point has no name but does intend to get involved with other issues.