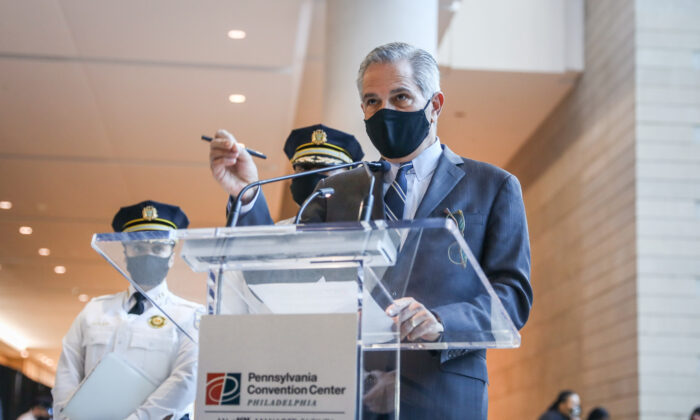 The Republican-controlled House empowers the committee to subpoena witnesses and documents from Philadelphia District Attorney’s Office.

This year, Philadelphia’s violent crime has risen by 8 percent and property crime by 30 percent, compared to 2021, according to the latest crime data by Philadelphia Police Department.

The newly formed committee—formerly called the Select Committee on Restoring Law and Order—is directed by House lawmakers to make evidence-backed recommendations up to the impeachment of Krasner.

The newly appointed committee chair Rep. John Lawrence, a Republican, said in a press release, “I do not enter this work with any predetermined outcome in mind. The committee will review the facts and follow them wherever they lead.”

On top of investigating Krasner’s office, the committee will also look into judges’ sentencing decisions and city hall’s spending on law enforcement, according to the same press release.

The committee’s formation grew out of a Republican-led effort to impeach Krasner, which came at the heels of San Francisco voters ousting their progressive prosecutor Chesa Boudin.

O’Neal told The Epoch Times in a previous interview that he thinks Krasner’s progressive prosecution policies directly led to the crime spree in Philadelphia.

“This move to remove the liberal district attorney is a national movement. Chesa Boudin is certainly a good example of that. In Los Angeles, voters are also working to recall George Gascón. In Pennsylvania, we don’t have recall elections. So the impeachment really is the method for removing a sitting elected official,” he said.

Krasner’s signature policies include lowering the bar for diversion programs, no prosecution of a slew of low-level crimes, categorically downgrading certain charges to lower offenses, no cash bail recommendations for a wide range of misdemeanors and felonies, and reduced sentencing guidelines in plea bargains, according to a review of the office’s policy memos.

The overarching goal of these policies is to drive down the number of people behind bars.

Danilo Burgos, one of the two Democrats to serve on the Committee on Restoring Law and Order, told The Epoch Times that he didn’t think Krasner’s policies were the determining driver of the crime spree.

As a representative of the crime-ridden 197th district in North Philadelphia, Burgos has long held that a lack of investment is the ultimate driver of poverty and crime.

He acknowledged that his Republican colleagues do not see eye to eye with him on crime, but he said he is confident they can work together to find common-ground solutions.

“I hope this committee isn’t about a politician, and I disagree with the impeachment idea. Krasner was elected in a democratic process that we shouldn’t be circumventing,” Burgos said.

Martina White, a Republican lawmaker representing the 170th district in Northeast Philadelphia, told The Epoch Times, “All elected officials should be held accountable for their actions while in public office. If there’s misbehavior in Krasner’s office, as it pertains to him abusing his prosecutorial discretion, that should be addressed.”

All civil officials up to governor can be impeached for misbehavior in office, according to the Pennsylvania Constitution. The constitution grants the sole power to impeach elected civil officers to the House of Representatives. Following the impeachment by the House, the Senate must hold a trial, after which two-thirds of votes are required to convict.

Currently, Republicans hold a majority in both the State House and Senate. They need five non-Republican votes to reach the two-thirds threshold in the Senate.

The committee is expected to conduct investigations throughout the summer and produce a report in the fall, ahead of the November general election.

The Epoch Times reached out to Krasner’s office for comments but received no reply by press time. Krasner said in a June press release that the Republican-led impeachment effort was an attempt to overturn an election that they lost.