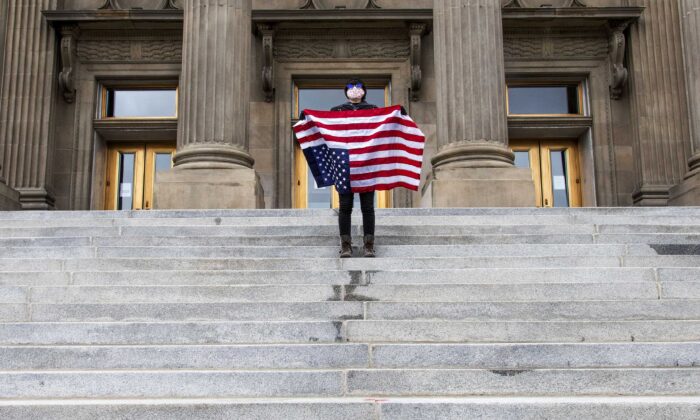 A student holding a U.S. flag upside down stands atop the steps at the Idaho Capitol building in Boise on April 26, 2021. The Idaho Senate has approved legislation aimed at preventing schools and universities from indoctrinating students through teaching critical race theory. (Darin Oswald/Idaho Statesman via AP)
Big Tech, Censorship, and Socialism

Over 5,000 Sign Pledge to Continue Teaching Critical Race Theory Even if Outlawed

Over 5,000 people have signed a petition (pdf) at the Zinn Education Project that states they vow to continue to teach controversial critical race theory (CRT) concepts to their students, even if outlawed in their state, amid growing backlash from parents against the teaching of CRT in their children’s schools.

The petition requires one to declare their role as a “teacher, principal, librarian, etc.” but their roles are not displayed under their names and comments.

Many of the signees appear to be teachers, but one identified as “a former student teacher and activist” and another said they “used to be a Public School teacher.”

The Zinn Education Project produces history lessons based on books by Marxist writer Howard Zinn, including “A People’s History of the United States.” The materials are offered free to K-12 teachers across the country.

CRT is rooted in the Marxist theory of class struggle, but with a particular focus on race. Proponents of CRT see racism in every aspect of the American public and private life and seek to dismantle American institutions—such as the Constitution and legal system—which they claim to be inherently and irredeemably racist.

While schools have for years been quietly infusing CRT into their curriculums, it wasn’t until last year, during lockdowns enacted in response to the CCP virus pandemic, that parents were able to see what their children were being taught. Since then, parents have been increasingly stepping forward to oppose CRT due to its racially divisive and anti-American concepts.

Loudoun County, Virginia, has since become “ground zero” in the fight against CRT-based indoctrination in schools nationwide, according to the co-founder of a parents’ group taking on the local education establishment.

CRT must be uprooted because it “seeks to view everything through the lens of race and believes all institutions, traditions, language, and history of this country are systemically racist,” Ian Prior, a parent who helped to found, and is executive director of, Fight for Schools, which is registered in Virginia as a political action committee, previously told The Epoch Times.

A number of states have banned, or introduced legislation to ban, the teaching of CRT in schools as parents across the country make their opposition to the ideology heard.

The Zinn project claims the laws that ban CRT are to stop teachers from “teaching the truth” about America, which is claims “was founded on the dispossession of Native Americans, slavery, structural racism and oppression” and that “structural racism is a defining characteristic of our society today.”

“We, the undersigned educators, refuse to lie to young people about U.S. history and current events—regardless of the law,” the project urges teachers to write to their state legislators.

The project is aiming to collect 6,400 signatures for the pledge.

Robin Steenman, head of Mom’s for Liberty Tennessee chapter, told The Epoch Times’ “Crossroads” in a July 9 interview about how CRT curricula can take different forms but result in the same negative impact on students.

“The curriculum in Williamson County is, August through May, a constant drumbeat of emotionally charged dark material, dark subject matter, that includes cannibalism, suicide ideation,” Steenman said of her school district. “Some grades talk about rape, fourth grade talks about abortion. It’s very racially charged, points out angry white people. It’s very anti-American, points out only America’s faults and none of its redemptive qualities.”

One CRT-based curriculum adopted by Steenman’s school district, Wit and Wisdom, is “anti-authority, anti-tradition, and anti-church,” according to Steenman. “So those are all elements throughout the Wit and Wisdom curriculum K–5. And if a child is exposed to that month after month after month, spending more time with their teacher than arguably they spend with their parents, then the danger is real.”

The teaching of CRT may appear different from school to school, but Kevin Roberts, CEO of the non-partisan Texas Public Policy Network says parents can quickly discern if their children’s schools are using CRT by going to school board meetings and asking questions or looking into the curriculum being used.

He says they will likely be using catchphrases within the curriculum like “white privilege,” “systemic racism,” “equity,” “social justice,” “identity,” and “ally,” among others.