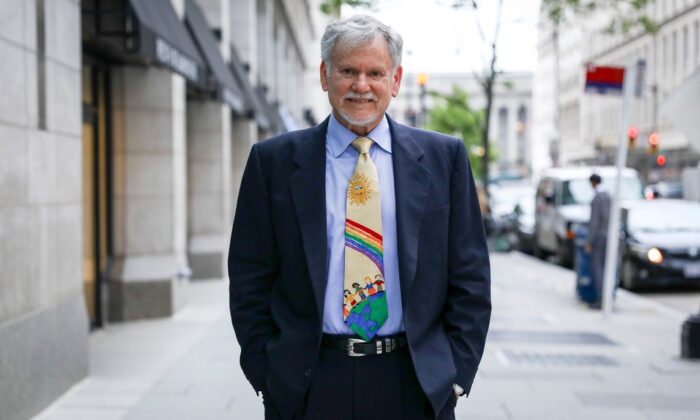 Our Troubled Boys and How We Can Help Them

The issue of boys failing due to dad-deprivation is largely being ignored, expert says
By Jan Jekielek

“In the United States, there have been six mass school shootings that have killed more than 10 people,” says Warren Farrell. “All six have been done by boys who were dad–deprived, from Sandy Hook to the Texas shooting.”

The recent horrific Uvalde, Texas, school shooting has prompted heated debate about gun control, school safety, and mental illness. But few are zeroing in on the importance of a father’s presence, Farrell argues.

In a recent episode of “American Thought Leaders,” host Jan Jekielek discussed these school shootings and the difficulties faced by our boys and young men today, with Warren Farrell, author of “The Boy Crisis: Why Our Boys Are Struggling and What We Can Do About It.”

Jan Jekielek: I’ve been thinking about you in the wake of the recent mass shooting in Uvalde. This young man who did this horrific act was, like many who have done it over the years, dad–deprived and dad–deprived in a very serious way. You’ve been writing about this.

But the key thing is that our daughters live in the same families with the same values. They’re exposed to the same replacement theory hatred, toxic politics, guns, video games, and media. They suffer similar mental illnesses, yet our daughters are not doing the killing. Our sons are.

We’re ignoring what I call “the boy crisis.” In the United States, there have been six mass school shootings that have killed more than 10 people. All six have been done by boys who were dad–deprived, from Sandy Hook to the Texas shooting.

But no one is looking at dad deprivation as an issue. I said no one, but there are two exceptions. In Florida, the speaker of the Florida House of Representatives read “The Boy Crisis” because he had three sons, and then gave the books to the Republican and Democratic House leaders.

Long story short, they drew up a bill to address the fatherlessness issue—what they called the fatherhood crisis. Every single Republican and Democrat in the Florida House voted for that fatherhood crisis bill, which devotes $75 million to developing programs to inspire fathers to become more involved in the family. And Governor DeSantis signed that bill into law.

And Kentucky has passed an equal shared parenting law that says, short of some major problem with the mother or father, the initial presumption is that both parents will be equally involved with the children after divorce.

By and large, the boy crisis and fatherlessness are being avoided, even though they’re right here before us. As we look at dad deprivation, we realize this is also the single biggest predictor of suicide, and mass shootings are both a homicide and a suicide. When we look more closely, we see it’s one of the biggest causes of mental illness in boys, and in drug and video game addiction.

Mr. Jekielek: Why don’t you flesh that out a bit more?

Mr. Farrell: The children who do best have what I call checks-and-balance parenting. The child says, “Mom, can I climb the tree?” And Mom says, “Maybe in a few years, sweetie, but right now you’re too young, and you could fall.” If asked separately, Dad might say, “Well, that’s a bit high, but I trust you to be careful.”

When Mom and Dad find they’ve given the child different instructions, the dad rarely says something like, “When children climb trees, they’re able to assess risk, and that assessment actually gets their synapses firing, which increases their IQs.”

On the other hand, children need the insights of mothers as to where risk should be averted. So the mother and father might confer and say, “We agree you can climb the tree but not beyond a certain point, because you might get hurt if you fell.” That type of dialogue is where children benefit. And they’re in a really outstanding situation if they can hear Mom and Dad talking about this with respect.

This is just one of a number of differences in dad versus mom parenting. For example, the dads tend to do more boundary enforcement. Moms are more likely to set boundaries, while dads are more likely to enforce them, and in that enforcement, the child learns postponed gratification and to focus on attention to detail.

Fatherless boys are less likely to have that postponed gratification that emanates from the boundary enforcement, and, therefore, they start doing poorly in school. They start feeling badly about themselves. When a boy doesn’t accomplish things, girls aren’t interested in him, he’s not praised by his parents or his teachers, and he starts cutting himself down.

Dropping out of high school impacts a boy’s pride, his self-esteem, and his ability to be attractive, both relationship-wise and sexuality-wise, to women. This often leads him into depression, weight gain, and drug and video game addiction.

Mr. Jekielek: Coming back to this most recent shooting and others, this is obviously the prime example where the man will be blamed, and toxic masculinity will be cited. It probably won’t be obvious to many people that the things we’ve just been talking about are a central issue here.

Mr. Farrell: Absolutely. Let me be very practical and talk to the moms who are watching at home. I think single moms are among the hardest working people in the country, but it’s also important to have a dad in their child’s life and to understand the differences between dad-style parenting and mom-style parenting. Dads are much more likely, for example, to tease the child, to rough-house with the child, and so on.

That dads help create empathy with a combination of roughhousing and boundary enforcement is important to understand. Dad’s teasing, for instance, at least up to a point, helps children to pick up nuances of language, to laugh at themselves, and to have a more sophisticated emotional intelligence.

If the biological father can’t be involved, then I encourage you to get your son into Cub Scouts. If he attends Cub Scouts consistently for two years or longer, the data is very strong that it increases your child’s character development. Get them involved in sports—organized team sports and sports like tennis and gymnastics, which require focus on individual discipline.

If you have any interest in faith, get your children involved in a faith-based community. Make sure the priest, the rabbi, the minister, or the imam gets your son involved with other boys his own age.

Mr. Jekielek: So essentially you’re saying that the best thing for tackling dad deprivation is to encourage the value and importance of father involvement.

Mr. Farrell: That’s one of the things. As I said about the Kentucky legislation, another absolutely crucial part is that if divorce happens, the children do best with an equal amount of parenting. Short of extreme circumstances like alcohol abuse, both father and mother need to be equally involved.

Some other things are very important. In order for children to do almost as well as they would in an intact family, the father and mother should live within a 20 minutes’ drive time from each other. Otherwise, the children start resenting going over to the other parent’s home and missing their best friend’s birthday party or their soccer practice.

And it’s important that children not hear the parents bad-mouthing each other. When that happens, you’re not just bad-mouthing the other parent, you’re abusing the child. When a child hears his mother saying that his father is a narcissist and a liar, he begins to wonder, “I look like my dad. Will I become the same way?” The same is true for the father who bad-mouths the mom.

Finally, we now know that children who do best after divorce have parents who go to consistent relationship or couples communication therapy. And I emphasize the word “consistent,” because parents, when they only go to emergency counseling, are usually arguing and not listening to each other. When you’re going to consistent counseling, a good counselor can help you both to hear each other more fully.

Mr. Farrell: As you know, I’ve done couples communication workshops for the last 30 years. I think we really need to learn to hear perspectives that we’re not initially inclined to hear and to know how to be criticized by the people we love without becoming defensive.