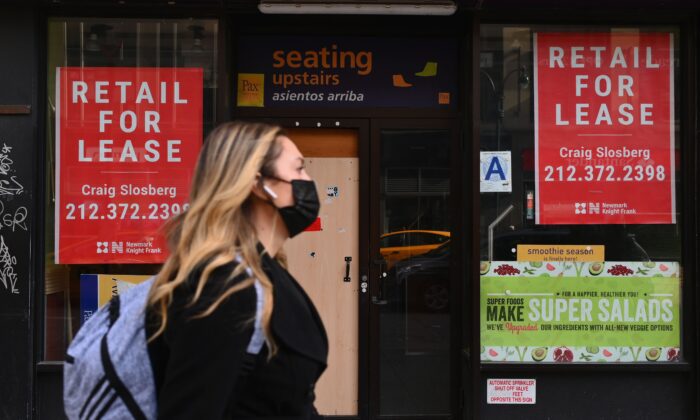 A woman walks past a closed retail store for lease in midtown Manhattan in New York City on Jan. 25, 2021. (Angela Weiss/AFP via Getty Images)
Viewpoints

Our Pandemic Fears Are Killing What Makes Life Worth Living

The unconstitutional lockdowns provoked by the CCP (Chinese Communist Party) virus have dragged on for almost a year now, with little sign of the “pandemic” letting up. “Two weeks to slow the spread” and “15 days to flatten the curve”—lies from the moment they were uttered, as anyone with an ounce of sense knew—have molted into months and soon enough into years.

Meanwhile, the media has been content to celebrate—excuse me, “mourn”—the mounting death toll attributed to COVID-19 as long as it could damage the Trump administration, now driven from a militarily occupied Washington, D.C. Almost everything that has happened this past year, it seems, could be blamed on the CCP virus, exported from Wuhan, China, whether on purpose or by accident.

Not that it matters. The Biden administration is no more going to hold communist China responsible for its malignant carelessness—or its deliberate malignity—than Hunter Biden will ever come clean about his business dealings in China and Ukraine.

Indeed, Joseph Robinette Biden Jr., the new president, is more likely to thank than blame the Chinese for helping him to oust Trump, while the robinettes in the mainstream media chirp happily in the background.

Make no mistake: The thoroughly dishonest legacy media, which now functions as the apparatchik propaganda wing of the Democratic Party, bears the brunt of the blame for the widespread devastation caused not by the Chinese bug but in the destructive overreaction to it.

Through its constant fear-mongering and goalpost-moving, the media has transformed a fairly normal herd cull (no fun, of course, if you’re part of the herd that’s culled) into an all-purpose bogeyman to instill terror into weak-hearted safety-firsters willing—literally—to trade everything that makes us joyfully human for the imaginary security of a slave’s muzzle.

Land of the free and home of the brave, indeed. Dissent, formerly the “highest form of patriotism” on the left, is now tantamount to treason. Media and government types are openly calling for “re-education” of Trump supporters, Republicans, conservatives, or anybody who disagrees with the “progressive” program. Anyone even vaguely associated with the events of Jan. 6 on Capitol Hill is apparently now subject to arrest. Disagreement is now insurrection. Democrats now want not only “unity” but unanimity—or else.

The current viral death count—as we now know, very generously defined as the death of anyone who dies having tested positive on the way to the grave—stands at roughly 420,000, which amounts to 0.00127 of the estimated U.S. population of 330 million. Or, to take just “cases” (the new benchmark, which is a function of increased testing, not increasing infection): there have been 25.3 million cases in the United States, of which .0166 of that number have died.

Is this “unacceptable”? If so, why? To reverse the maxim attributed to Stalin, a million deaths are a tragedy, but one death is a statistic—and one that has been psychologically weaponized against the American people.

Music, art, dance, theater, motion pictures—all are now closer to death than the obese 85-year-old diabetics with heart conditions and other comorbidities who make up the lion’s share of deaths directly attributed to the virus. Ditto public gatherings—except, of course, for the violent riots by members of Black Lives Matter and Antifa, vengeful anarchists and fascists using the cover of the pandemic to settle old scores or simply to break and burn stuff.

Other real victims are the hospitality sector, including airlines, travel agents, hotels, restaurants, and bars, which have long been the targets of the “climate change” lunatics and Luddites. And don’t forget, crucially, churches and synagogues, which militant atheists have long wished to shutter, since the very thought of a God is anathema to them.

Nearly our entire public life—the things that make life worth living—has been shut down, ruined, put out of business, and burned to the ground in total defiance of the Constitution. Not to mention the security of our electoral system, whose safeguards in many states were summarily junked during the recent presidential election. If and when everything reopens, it will be under the conditions of the “new normal,” which means that in practice, they will never, ever, ever let us go.

In retrospect, many things cost Donald Trump the election but the thing that most did him in was the CCP virus and, far worse, his decision to put the self-aggrandizing Anthony Fauci on national television for weeks on end to frighten the bejesus out of the U.S. public and pave the way for the Stalinist conformity to which the public is now exhorted and commanded.

Perhaps worst of all, affecting our very humanity, is the notion of “social distancing,” which has cruelly separated both individuals and generations, instructing people to regard their fellow human being not as a fellow child of God but a radioactive nightmare as likely to kill you as look at you. Children in particular have been taught the most useful lesson the ruling class behind this monstrous policy could hope for: fear, obedience, and submission.

Has it been worth it? By any unemotional and rational consideration, the answer is no.

This seems a cruel question, to which a cruel trade-off must be the answer. But so what? Civilizations and societies have been making that choice since the beginning of history. The Spartans pitilessly sacrificed their weak newborns that their armies might remain strong. At Masada, 960 Jewish rebels holding out against the might of Rome chose death by their own hands rather than submit to the emperor. During the horrific Sack of Rome in 1527, which effectively ended the Italian Renaissance, a handful of Swiss Guards spirited the Pope across the Tiber and into the safety of the Castel Sant’Angelo—Hadrian’s old mausoleum—at the cost of most of their lives.

As I write in my new best-seller, “Last Stands,” “if nothing is worth dying for, then what are we living for?” After a year of COVID, during which we have surrendered our civil liberties and our way of life to a handful of intellectually mediocre and morally reprehensible bureaucrats—some unelected—what have we got to show for it? We live, effectively, under house arrest.

To take just one example of what we’re risking “to save just one life”: the theaters in ancient Greece were enormous spaces, seating upwards of 15,000 citizens. Far from simple entertainment—that concept was essentially unknown to the ancients—they were the centers of the Greek polis: communal, religious, cultural, and moral rituals in which the whole city took part.

The Homeric stories of the interactions between gods and men were familiar to the spectators, but it was each playwright’s unique handling of the material that provided both the drama and the civic instruction necessary to pass on the values of Greek civilization to the next generation.

The Greeks, in their battles with the Persians and even with other Greeks, were prepared to sacrifice themselves for their unique culture, which in one form or another lasted thousands of years; today, we are prepared to sacrifice our culture in order to win for ourselves a few more years of home imprisonment. And then thank our betters for it as we bequeath our children nothing.

This is cowardice, not courage. This is selfishness, not altruism. This is the fruit of an irreligious nation with a vaguely defined “hope” for the future, but no stake in it.