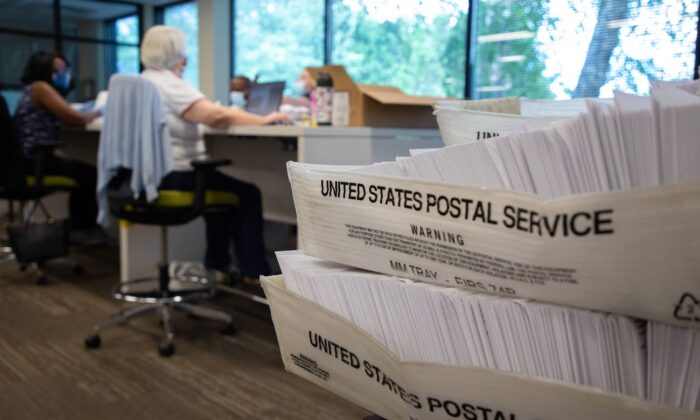 The Supreme Court late Wednesday ruled to allow absentee ballots received up to nine days after Election Day on Nov. 3 to be counted in North Carolina.

In what is regarded as a victory for Democrats, the 5-3 ruling (pdf) means that the North Carolina’s Board of Elections decision to stretch the period from three to nine days for absentee ballot counting will stay. The ballots will be counted as long as they are postmarked by Election Day.

The latest Supreme Court decision comes after the 4th Circuit Court of Appeals ruled on Oct. 20 to uphold a deadline extension in the state for the receipt and counting of absentee ballots to nine days from three.

The Democrat-majority State Board of Elections’ decision to stretch the deadline to nine days was part of a legal settlement with a union-affiliated group—the North Carolina Alliance for Retired Americans—in late September. The legal settlement also loosened requirements for fixing absentee ballots that lacked a witness signature. The settlement said counties should have a longer time frame to accept ballots because of possible mail delays.

North Carolina Republicans earlier on Wednesday requested for the second time that the Supreme Court block the extended deadline. They sought to reinstate the three-day extension that North Carolina had set last June. Their petition (pdf) cited concurrences filed by Justices Brett Kavanaugh and Neil Gorsuch on Monday, when the court ruled against extending a deadline for absentee ballots in Wisconsin.

President Donald Trump’s campaign had filed a separate but similar appeal to the Supreme Court to block the extended deadline.

Justice Amy Coney Barrett did not participate “because of the need for a prompt resolution and because she has not had time to fully review the parties’ filings,” court spokeswoman Kathy Arberg said.

About 1.4 million voters in North Carolina requested mail-in ballots ahead of Election Day—nearly seven times the number of requests at the same time in 2016, noted Raleigh News and Observer.

Requests for mail-in ballots in North Carolina closed on Oct. 27. Those still wanting to vote can vote during the early voting period or at their assigned polling place on Election Day.