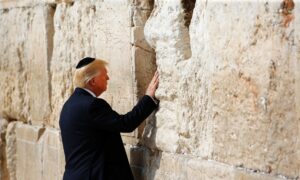 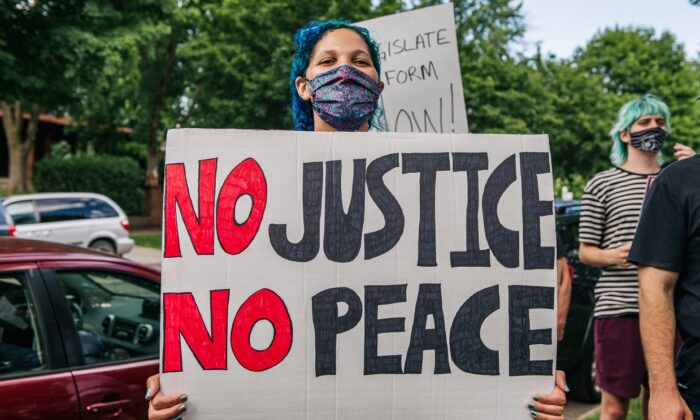 A woman stands with a sign that reads "No Justice No Peace" during a demonstration in St. Paul, Minn., on June 24, 2020. (Brandon Bell/Getty Images)
Viewpoints

‘No Justice! No Peace!’—On Russiagate, the Right May Have to Steal From the Left

In a well-wrought article for the National Review, Kyle Smith exposes how Democratic loyalists such as CNN’s Chris Cillizza are already downplaying the results of John Durham’s investigation of the Trump–Russia fraud, specifically the guilty plea of Kevin Clinesmith—a lawyer who falsified a government email in order to permit spying on a man who not only wasn’t a spy but was completely innocent.

This permission from the FISA court, exercised four times, gave the true spies—the FBI—the license to snoop on virtually anyone who had ever even met that man (Carter Page). That would include the president.

Pretty despicable, no? More is undoubtedly on the way. But the question is—who is listening? Will the left’s “prevent defense” be successful at repressing the most significant political scandal of our lifetimes (yes, far more than Watergate, because systemic).

It would be like sweeping cancer under the rug.

That is what was going through my mind as I read a review copy of Lee Smith’s compelling new “The Permanent Coup: How Enemies Foreign and Domestic Targeted the American President.” This book functions as a template for what actually happened in our country and the world from 2013, when the Maidan Revolution brought freedom lovers to the streets of Kyiv, Ukraine, all the way to 2019–2020, when a bogus impeachment trial occurred in our Senate based on the flimsiest evidence from that same country.

Ironically, the name Joe Biden ricochets between the two with the even more bogus Russia fraud and the ensuing eye-rolling, fake-from-the-start Mueller investigation shoehorned in between.

(Lee Smith is also the author of “The Plot Against the President,” which went to No. 1 on Amazon earlier this year.)

Both Smiths are obviously doing their parts to keep the story front and center, as are many here at The Epoch Times, as well as, obviously, Fox News commentators with the names Tucker, Laura, and Sean.

But is this all a roundelay of preaching to the choir, those already convinced, waiting for the latest tidbit from investigative reporters John Solomon or Sarah Carter, or attorneys Andrew McCarthy or Jonathan Turley?

You don’t have to be Tolstoy or even John Grisham to imagine what’s going on behind the scenes all over Washington now, lawyers with clients whose surnames begin with a B, C, M, S, and P … and probably others we don’t know about … counseling them to be cool and keep their mouths shut, at least until Nov. 3.

Biden will be elected then, and all will go away. Poof—no more investigations! No Bill Barr. No Durham. They will be vestigial lame ducks. Impotent. Who knows—maybe even Andrew Weissmann will be attorney general this time? Happy elitist days are here again!

It could happen. So what do we do?

If things were reversed, the left wouldn’t put up with it. Not for a minute. They have no mercy. (Just today, Clintonista Joe Lockhart rescinded his tweet wishing Rush Limbaugh well in his battle with cancer.) They accuse us of lacking empathy, but they have less.

They would take to the streets instantly to protest. At first, it would seem peaceful, but soon enough, the more militant would break some windows, light fires, and smash cars, maybe blow up a couple of police stations and laser a few cops in the eyes, then beat up some civilians and leave them bleeding on the sidewalk. They should have been quarantining anyway.

And they get away with it because the mayors of their cities and governors of their states don’t care, probably secretly siding with them.

“No justice, no peace!” is their cry.

No justice for whom? What about the tens of millions who voted for Trump? How about people who don’t want American presidential elections turned into a frame-up and then their elected president hounded constantly from well before he takes office until he’s pushed out the door?

If you watch that infomercial known as the Democratic National Convention 2020, you find no mention of any of this, not a word of the violence going on (much of it record-breaking in terms of shootings and deaths) in the streets of Portland, Seattle, Chicago, Los Angeles, Baltimore, Milwaukee, Memphis, Albuquerque, Philadelphia, New York, and on and on. It’s magically wiped away and ignored.

The punishment is light at best, and what there is usually comes from the federal government.

So if Barr and Durham don’t come up with enough or aren’t able to give the miscreants their just deserts and send up people who apparently manipulated the FBI, CIA, and other government agencies for the most egregious illegal and seditious purposes, and Trump loses, maybe we should steal a march from the left and for once throw away our scruples and politesse and do what they do—take to the streets and hold up society, force it to turn our way, with violence if necessary.

Well, scratch the violence—that’s their way.

But we should lock arms and march down Fifth Avenue and Wilshire Boulevard and the Washington Mall, millions of us, everywhere in America, shutting it down until we get our way and chanting, you guessed it, “No Justice! No Peace!”

Roger L. Simon is an award-winning novelist, Oscar-nominated screenwriter, and co-founder of PJ Media. He is now a columnist for The Epoch Times. Find him on Twitter and Parler @rogerlsimon.