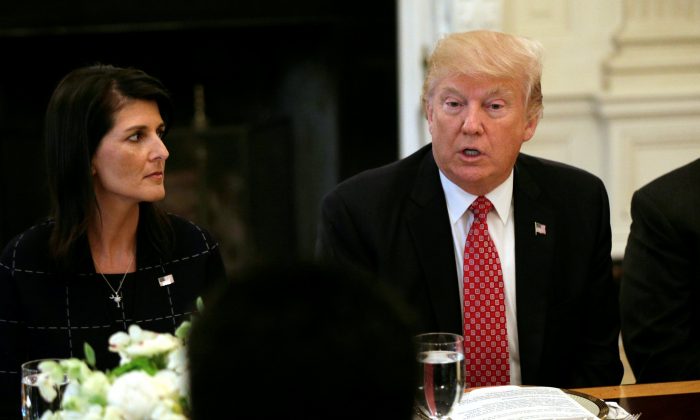 With U.S. Ambassador to the United Nations Nikki Haley at his side (L), President Donald Trump speaks during a working lunch with ambassadors of countries on the UN Security Council at the White House in Washington on April 24, 2017. (Kevin Lamarque/Reuters)
US News

“Silencing people, not to mention the President of the U.S., is what happens in China not our country,” Haley wrote in a tweet.

Twitter announced earlier in the day that it was permanently removing Trump’s account, which had been active since before he took office in 2016. The company claimed his recent tweets were inciting violence.

Trump in response accused Twitter of “banning free speech” and coordinating “with the Democrats and the Radical Left in removing my account from their platform, to silence me—and YOU, the 75,000,000 great patriots who voted for me.”

Trump said his team has been negotiating with competitors to Twitter and is looking into building their own platform in the near future.

Facebook also banned Trump, at least for the remainder of his term.

Haley, who served as ambassador to the United Nations under Trump after governing South Carolina and is rumored to be mulling over a 2024 presidential bid, was joined by others in reacting strongly to the bans.

Jason Miller, a Trump campaign adviser, said large technology companies want to “cancel” Trump supporters. “If you don’t think they’re coming for you next, you’re wrong,” he wrote on Twitter.

Banning the president “is the biggest mistake” Jack Dorsey, Twitter’s CEO, “and the fascists of Silicon Valley have ever made,” added Sebastian Gorka, a former Trump aide.

Some Twitter users voluntarily left the platform after the wave of bans, such as radio hosts Mark Levin and Rush Limbaugh. They urged people to transition to Parler, which has stronger free speech protections than Twitter.

Parler was removed from the Google Play store on Friday by the tech giant and Apple threatened to remove it as well unless the company introduced stronger moderation practices.