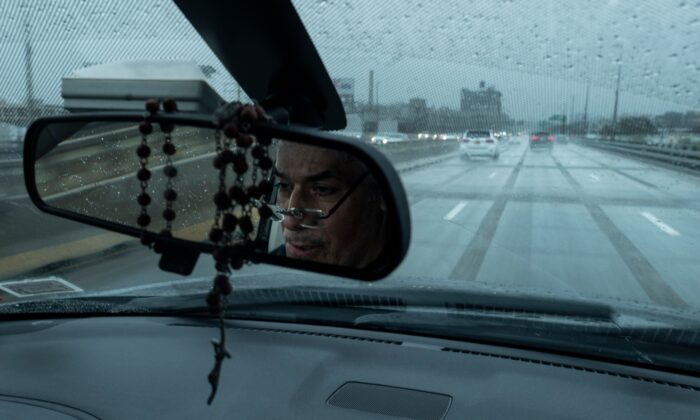 Fabian Arias, a Lutheran pastor with Saint Peter's Church is reflected as he drives his car in Brooklyn, New York City, on May 22, 2020. (Johannes Eisele/AFP via Getty Images)
NY News

The Green Light Law went into effect in December 2019 and primarily allowed for illegal individuals to apply for and obtain driver’s licenses from the Department of Motor Vehicles (DMV).

As part of the new law, which New York was the 13th state to introduce, individuals aged 16 or older are able to apply for a standard license, including those who have never been issued a Social Security number, although they must show a combination of documents that prove their name, date of birth, and New York state residency.

The provision regarding law enforcement is contained within an update to New York’s 2020 budget, signed by Gov. Andrew Cuomo in April, WKBW reported, and makes it a class E felony for officials to share the information regarding illegal immigrants.

The amendment states that anyone who receives or has access to DMV records must certify beforehand that they will not use such records for civil immigration purposes or disclose them to an agency that primarily enforces immigration law. The amendment says that “violation of such certification shall be a class E felony.”

The law also states that any such person must identify any immigration official or entity that received department records or information from any such certifying person or entity. The amendment says that a failure to maintain such records is also a class E felony.

U.S. Attorney for the Western District of New York, J.P. Kennedy, told WKBW that he believes the new amendment is “very concerning,” noting that “Border Patrol, for example, working the highway in the middle of the night and pulls over a vehicle, they can’t run the plates to determine who owns that vehicle.”

“I think it’s legislating obstruction, and it’s very concerning to me,” he said, pointing out that the amendment was made silently, amid a pandemic.

“We’ve seen how important communication and coordination is in coming up with a response to the pandemic. And sort of causing people to work in isolation, it’s a recipe for disaster.

“I’m very concerned about this, and I think it’s very unfortunate and makes me really question the motives of the individuals that enacted this law, if their professed interest in public safety and public health is really as important as they say they are.”

Kennedy said the law amendment also has a national impact, noting, “If any law enforcement officer in Texas ran across a New York state registered vehicle, they could not run that plate, if it was any officer who was involved in the enforcement of immigration law.”

In February, acting ICE Director Matthew Albence told Fox News that the law puts the lives of officers in danger, and prevents groups such as Immigration and Customs Enforcement (ICE) and Customs and Border Protection (CBP) from doing their jobs.

“CBP and ICE are the two entities charged by the federal government to conduct those investigations, and we are no longer able to do so in nearly as effective a fashion, as a result of this Green Light Law. It makes us less effective, and it puts our agents and officers in greater harm’s way,” he said.

“Basically, [Cuomo] said it was more important … that illegal aliens have driver’s licenses than it is for his state officers to actually do their jobs and go home safely at the end of the night,” Albence added.

The Epoch Times has contacted Cuomo’s office for comment.