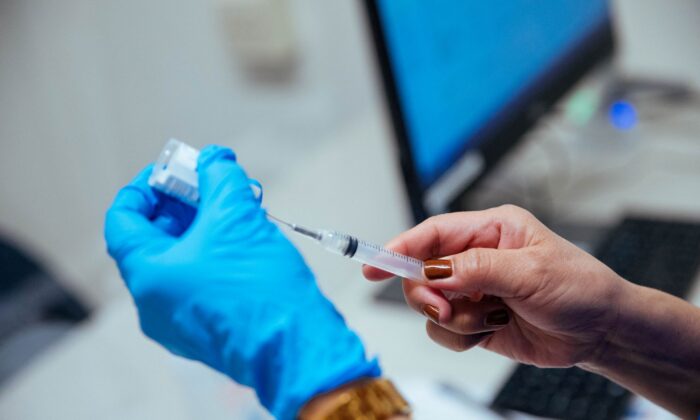 Nearly Half of Democrats Would Back Temporary Detention for Unvaccinated: Poll

Nearly half of Democrat voters would back measures requiring that the unvaccinated live temporarily in “designated facilities or locations” for refusing the COVID-19 vaccine, a recent poll has found.

A national telephone and online poll from the Heartland Institute and Rasmussen Reports, which surveyed 1,016 likely U.S. voters, found that 45 percent of likely Democratic voters would support such measures for unvaccinated Americans.

The poll, conducted on Jan. 5 and released on Jan. 13, also found that 59 percent of respondents who said they were Democrats would favor a government policy requiring that citizens “remain confined to their homes at all times, except for emergencies” if they refuse to get a COVID-19 vaccine.

The margin of error is 3 percentage points with a 95 percent level of confidence.

Almost half of Democratic voters think federal and state governments should be able to fine or imprison individuals who publicly question the efficacy of the existing COVID-19 vaccines on social media, television, radio, or in online or digital publications, the survey found.

Meanwhile, 29 percent of likely Democrat voters who participated in the survey said they would favor temporarily removing parents’ custody of their children if parents refuse to take the COVID-19 vaccine.

No such penalties have been rolled out for the unvaccinated in the United States, however, elsewhere, some are set to face fines if they haven’t been vaccinated against COVID-19, the disease caused by the CCP (Chinese Communist Party) virus.

Greece has imposed a vaccination mandate for people aged 60 and older. Older people failing to get vaccinated will face penalties, starting at a 50-euro ($57) fine in January and followed by a monthly fine of 100 euros ($114) after that.

Health minister Thanos Plevris said the fines would be collected through the tax office with the money going to help fund state hospitals.

“The age factor is important because of its impact on the public health service,” Plevris told private Open TV on Sunday.

In Austria, the health minister announced last month the government plans to impose fines of up to 3,600 euros (around $4,000) on people who flout a COVID-19 vaccine mandate it aims to introduce in February for all residents aged 14 and over.

In Canada, Quebec province is set to fine unvaccinated residents who do not have a medical exemption from receiving a COVID-19 vaccine.

The French-speaking province’s Premier Francois Legault announced on Jan. 11 that adult residents who do not qualify for medical exemptions will be charged a financial penalty. He said he believes that refusing to get vaccinated leads to consequences for the health care system.

Last week’s announcement marked the first time a government in Canada has announced a financial penalty for people who refuse to be vaccinated against COVID-19.

“Those who refuse to get their first doses in the coming weeks will have to pay a new health contribution,” Legault said. “The majority are asking that there be consequences. … It’s a question of fairness for the 90 percent of the population that have made some sacrifices. We owe them.”

Legault didn’t elaborate on the details of the financial penalty, but said it would be “significant.”