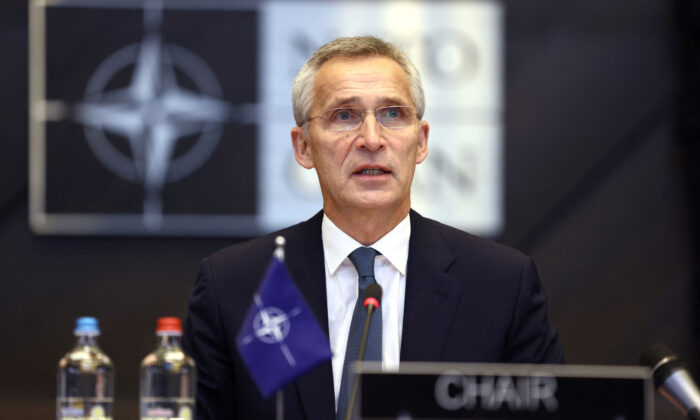 NATO Secretary General, Jens Stoltenberg attends at the start of the round table during the Meeting of NATO Ministers of Defence in Brussels, on Oct. 21, 2021. (Kenzo Tribouillard/AFP via Getty Images)
Europe

NATO Will Concentrate on Countering the Chinese Threat for Next Decade: Stoltenberg

NATO will concentrate on countering the Chinese communist threat as part of next decade’s new strategic approach, according to its secretary-general, as reported by The Financial Times.

This comes as the Chinese regime has become more assertive in its ambitions of global dominance, having allegedly gained the upper hand in key warfare technologies, such as long-range and hypersonic missiles.

“This region faces global challenges: terrorism, cyber but also the rise of China. So when it comes to strengthening our collective defense, that’s also about how to address the rise of China,” he said. “What we can predict is that the rise of China will impact our security. It already has.”

NATO, a political and military alliance of North America and the European Union, will adopt a new Strategic Concept during a summit next summer. The Strategic Concept will state the organization’s direction during the next decade, which will focus on offsetting the Chinese regime’s threat, unlike the version outlined in 2010.

The Chinese Communist Party (CCP) has embraced a more belligerent and blunt discourse regarding its global dominance ambitions this year, which has spurred the West to reorganize to counter the regime.

The CCP’s shift in rhetoric coincides with China’s nuclear expansion, advances in long-range and hypersonic missile technology, and the regime’s increasing military pressure on Taiwan and the South China Sea.

“They have more and more high-range weapons that can reach all NATO allied countries,” Stoltenberg told The Financial Times. “They are building many, many silos for long-range intercontinental missiles.”

China launched a nuclear-capable hypersonic missile in August, as stated in an investigative report by The Financial Times. The technology was described as a surprise to the U.S. intelligence community and highlighted China’s weapon development progress.

This year, the CCP has threatened to bring Taiwan into its fold through force if necessary, and experts believe it is making significant military advances toward invading the island. The CCP claims the island-nation as part of its territory, despite Taiwan being a self-governed democracy with independent military and currency.

Taiwan is of high strategic value in a potential fight with the CCP. It serves as a barrier to the Chinese navy, keeping the keys between the East and South China Seas and [holding] the People’s Liberation Army Navy within the first island chain.

China gaining full control of the South China Sea is key to its nuclear strategy and would put the United States in great danger. The regime would be able to use it as a staging area for nuclear submarines to travel to the Midway Atoll, putting them within range of the East Coast of the United States.

In addition, the communist regime has become a cyber threat and has been gaining influence in developing countries through its Belt and Road infrastructure projects.

Chinese cyberattacks, which mainly aim to steal information—including state secrets and advanced technology from private companies—have recently become more sophisticated and harder to detect. Attacks became more targeted and calculated after the Chinese military was reorganized, and industrial espionage attacks were transferred to another organ of the Chinese regime, the Ministry of State Security (MSS), the intelligence, security, and secret police agency of the communist regime.

In addition, the CCP has put enormous efforts into collecting user data, the new strategic commodity for global dominance which, aided by Artificial Intelligence could result in a coherent picture that can shape strategic and operational plans, and give an antagonist an unseen advantage by sometimes knowing more about his or her opponent than they know themselves.

China has been providing enormous loans to developing countries through the Belt and Road Initiative and other financing programs. Many nations are unable to repay those loans, falling into a “debt trap,” which forces them to grant strategic assets to China in the long-term, putting nations’ sovereignty at risk, and allowing the regime to expand its influence and power overseas.

Arthur Herman contributed to this report.