U.S. Secretary of State Mike Pompeo has implored democracies to work together to defend against expansive threats posed by the Chinese Communist Party (CCP), calling it a choice between “freedom and tyranny.”

“We, the free nations of the world, must induce change in the CCP’s behavior in more creative and assertive ways, because Beijing’s actions threaten our people and our prosperity,” Pompeo said during a speech at the Richard Nixon Presidential Library and Museum in California on July 23.

“The free world must triumph over this new tyranny,” he said, describing it as the “mission of our time.”

Pompeo called on Americans and partner countries to recognize that the CCP is fundamentally a Marxist-Leninist regime, saying the “ideology informs this decades-long desire for global hegemony of Chinese communism.” On this basis, the United States should approach the regime from the standpoint of “distrust and verify,” he said, adapting former President Ronald Reagan’s famous words regarding negotiations with the Soviet Union, “trust, but verify.”

“The only way to truly change Communist China is to act not on the basis of what Chinese leaders say, but how they behave,” he said.

Pompeo’s remarks capped a series of speeches by top administration officials in recent weeks seeking to spotlight the CCP’s malign actions in the United States and around the world. It came as Washington pushes back against the Chinese regime for its technology theft, human rights violations, and military aggression.

This week, the United States, in an unprecedented move, ordered the Chinese Consulate in Houston to close by the afternoon of July 24, with Pompeo accusing the facility of being a “hub of spying and intellectual property theft.” The Justice Department also confirmed on July 23 that the San Francisco consulate is harboring a wanted Chinese researcher, who’s been charged with failing to disclose in her visa application that she was a member of the Chinese military.

Three other Chinese nationals were recently arrested on similar charges of visa fraud, the department said.

The Justice Department also announced on July 21 an indictment against two Chinese hackers accused of a decade-long campaign to steal trade secrets from defense contractors and hundreds of firms around the world—most recently in an attempt to acquire COVID-19-related research.

Pompeo said that in the more than four decades since the United States normalized relations with the CCP, China has not liberalized as many had hoped.

“The truth is that our policies and those of other free nations resurrected China’s failing economy, only to see Beijing bite the international hands that were feeding it,” he said.

“President Nixon once said he feared he had created a Frankenstein by opening the world to the CCP. And here we are.”

Richard Nixon, who was president from 1969 to 1974, paved the way for the formalizing of U.S. diplomatic relations with the Chinese regime in 1979 by setting up a series of meetings with Chinese officials, including a visit to Beijing in 1972.

Not a ‘Normal Country’

Pompeo said people and countries “have to tell the truth” about the CCP: “We can’t treat this incarnation of China as a normal country just like any other.”

For instance, in the area of trade, Beijing “treats international … agreements as suggestions, as conduits for global dominance,” he said.

Doing business with CCP companies also isn’t the same as normal commercial engagements, Pompeo noted, saying these companies “don’t answer to independent boards, and many of them are state-sponsored and so have no need to pursue profits.”

He cited the example of telecom giant Huawei. The administration has called the company “what it is—a true national security threat,” he noted. The United States has raised concerns that Huawei and other Chinese tech firms may be used by Beijing for spying, given that all Chinese companies are beholden to the Party.

“If our companies invest in China, they may wittingly or unwittingly support the Communist Party’s gross human rights violations,” he said.

The administration has blacklisted dozens of Chinese firms over their role in aiding the regime’s repression of ethnic minorities in the region of Xinjiang.

In the same vein, Pompeo said that many Chinese students and employees “come here to steal our intellectual property and to take this back to their country.”

Trump in May barred entry to Chinese graduate and higher-level students affiliated with Chinese military institutions, in an effort to counter the regime’s state-sanctioned theft of American intellectual property.

The United States must also “engage and empower the Chinese people,” whom Pompeo called a “dynamic, freedom-loving people who are completely distinct from the Chinese Communist Party.”

He said the “biggest lie” the CCP tells is “that they speak for 1.4 billion people who are surveilled, oppressed, and scared to speak out.”

“On the contrary, the CCP fears the Chinese people’s honest opinions more than any foe,” Pompeo said.

He criticized the regime’s suppression of those voicing views unacceptable to the Party, such as dissidents and the whistleblower doctors who sounded the alarm about the CCP virus during the pandemic’s early stages.

“For many decades, our leaders have ignored, downplayed, the words of brave Chinese dissidents that warned us about the nature of the regime we’re facing,” he said.

“We can’t ignore it any longer.” 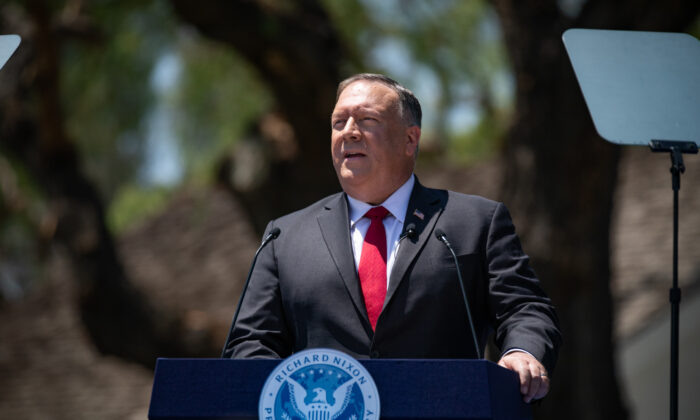