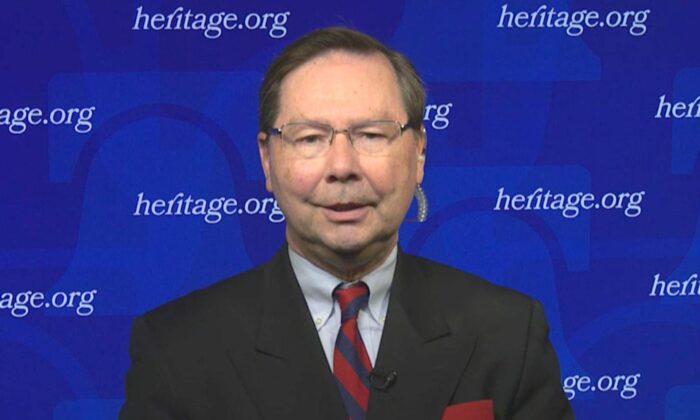 Hans von Spakovsky, a senior legal fellow at the Heritage Foundation and a former commissioner on the Federal Election Commission. (Crossroads. Screenshot via The Epoch Times)
Election Integrity

Election fraud in the United States dates back to the late 19th century and most often it involves absentee ballots, said Hans von Spakovsky, a senior legal fellow at The Heritage Foundation and a former commissioner on the Federal Election Commission.

Absentee ballots are the only kind of ballots that are voted outside the supervision of election officials and outside the observation of poll watchers, von Spakovsky told EpochTV’s “Crossroads” program in a May 20 interview.

“There’s nothing to prevent—unfortunately—activists and political consultants, and others from going to people’s homes and pressuring, intimidating, and coercing them to vote a particular way, or frankly, just taking their ballots and filling them out themselves and sending them in,” he said.

The Heritage Foundation, a Washington-based think tank, maintains an election fraud database that stores hundreds of proven fraud cases in which someone was convicted in a court of law and found guilty of election fraud, von Spakovsky said. “Many of those cases involve absentee ballots.”

In some of those cases, isolated individuals registered to vote in more than one state and who voted twice, once in person and once by absentee ballot, von Spakovsky said, but there are also organized cases of fraud through vote harvesting.

“I call it vote trafficking because that’s really what it is,” he said.

This has particularly been a problem in Florida and Texas, along the southern border, where political activists paid by candidates or political parties—called “boleteros” in Florida and “politiqueras” in Texas—go to people’s homes to pressure and coerce them to vote a particular way, the expert said.

“[They target] Hispanic communities where people are considered more vulnerable, poor, or maybe not as well informed.”

Von Spakovsky cited a prominent election fraud case in the 1997 mayoral race in Miami, where a court overturned the election due to evidence of widespread, massive fraud involving 5,000 absentee ballots.

In that election, incumbent “[Joe] Carollo won a majority of the in-person precinct votes, but his challenger, Xavier Suarez, won a majority of the absentee ballots,” von Spakovsky wrote in a legal memorandum for the Heritage Foundation (pdf). In the run-off election, the incumbent lost while his challenger received two-thirds of the absentee votes cast, the memo reads. Upon finding thousands of fraudulent absentee ballots, the court returned the incumbent to office.

Journalists of the Miami Herald won a Pulitzer Prize for an intensive investigation of that election fraud, von Spakovsky said.

He also referred to a case in Indiana, in which the state Supreme Court ruled that a ballot fraud scheme had targeted the poor, the elderly, and many people who spoke English as a second language.

“In many ways, it is like a mafia. You have organizations that are involved in doing this, I think, in a way that is very harmful to our election process,” he said.

“They should never have been counted,” he added.

Absentee ballots were introduced in the United States in 1864 when Abraham Lincoln was running for reelection, and they were exploited against him, the expert said.

“The ballots of soldiers—particularly wounded soldiers in hospitals—were basically being stolen, filled out and sent in in their name,” he said, referring to soldiers in New York.

The same is going on today, von Spakovsky said, citing a case of a supervisor in a nursing home in Michigan who was convicted of doing the same thing.

By the early 1900s, election fraud was so common all over the country that various measures to prevent it were put in place, from requiring people to register to vote, to coming up with the secret ballot, von Spakovsky said.

What is observed now, however, is a reverse of the trend of securing the election, he noted.

It is “a clearly defined well-financed effort to basically get rid of every safety and security protocol we have in place” such as voter ID, witness signature, and the ability of states to clean up their voter rolls, the expert pointed out.

When inaccurate voter rolls are combined with the policy of mailing ballots to all registered voters, “you will have large numbers of absentee ballots floating around in places where they can be gathered up by paid political activists and used to try to change election results,” he added.

Moreover, the left tries to force states to adopt automatic voter registration without a person’s consent, not only in driver’s license bureaus but in all state government agencies, von Spakovsky said, calling it “a recipe for fraud.” If this is implemented, people who own properties or do business in more than one state will be registered multiple times, and illegal aliens who do not have voting rights will also be registered, he added.

Thirty-six states have laws requesting or requiring voters to show some form of identification at the polls, according to the National Conference of State Legislatures.

Sen. Rick Scott (R-Fla.) recently said that Democrats are using claims that voter ID laws are racist in a bid to strike down these laws.

In September 2021, a North Carolina court struck down a law that required photo identification to vote, saying the measure “was enacted with the unconstitutional intent to discriminate against African American voters.”

Von Spakovsky said the claim that a voter ID requirement is racist is a “bogus argument” and the argument itself is “patronizingly racist.”

Each state that has passed a law requiring to show a photo ID to vote also provides a free ID to anyone that does not have it, he explained. Moreover, these laws have been in place for a long time. For example, in Georgia and Indiana, voter ID laws were enacted in 2008 when President Barack Obama was elected, he added.

Data shows that voter turnout has consistently gone up in states that require voter identification, and that includes all voters of all races and ethnicities, von Spakovsky said, debunking the claim. According to a recent poll, 80 percent of Americans support voter ID, he added.

“We have to show ID every day in so many other places, and no one ever claims that [it is] somehow racist.”

There have been dozens of organizations formed on the left to engage in voter registration, but they also file lawsuits against states to get rid of every election safety and security protocol, he said.

In 2020, Facebook founder Mark Zuckerberg and his wife, Priscilla Chan, made $419.5 million in donations to nonprofits, of which $350 million went to the left-wing Center for Technology and Civic Life.

The money was supposed to be used to buy personal protective equipment and new ballot-counting equipment, train poll workers, and expand mail-in voting to help Americans vote during the height of the COVID-19 pandemic, but critics said the funds were used to artificially drive up turnout in Democratic, but not Republican, strongholds across the nation.

For example, the donated money was used to implement drop boxes, which had never been used in prior elections, said von Spakovsky. Unguarded drop boxes without surveillance are an easy target for fraud because people are able to either manufacture or steal absentee ballots and stuff large numbers of them into a drop box while no election official sees it, he added.

“The clear intent there was to move the ‘Get Out the Vote’ campaign of the Democratic Party into government offices and use government offices to do that,” he said. “That was, like I said, unethical, something that should not have happened.”

In Green Bay, Wisconsin, the clerk responsible for running the city’s elections resigned a week before the 2020 election upon seeing that the grant money was also used to bring in a Democratic activist, who allegedly took over and began telling election workers what to do, with the approval of the Democratic mayor of the city, von Spakovsky said.

“States didn’t really have any laws that prevented a private individual from giving a grant to city and county election offices, but they shouldn’t have accepted that money.”

How to Ensure Election Integrity

When such anomalies are combined with findings documented by Dinesh D’Souza in his film “2000 Mules,” they pose “pretty serious questions” about the last presidential election and warrant investigation, von Spakovsky said.

D’Souza’s documentary presents an analysis of a huge amount of cell phone records which leads to the conclusion that ballot trafficking occurred in the 2020 election.

To ensure election integrity, von Spakovsky advises people to get involved locally in the election process. “Become a poll watcher, get a job as a precinct election official, pay attention to what your county election board is doing.” He also cautioned people against losing trust in the election system and encouraged them to “go vote.”

The Heritage Foundation created an election integrity scorecard, which compares how fair and secure election laws are in each state and ranks the states on a scale between zero, the lowest, and 100, the highest level of election security and integrity.

Von Spakovsky urged people to check the score of their state, find out which laws are lacking, and ask their state legislators to fix these laws.