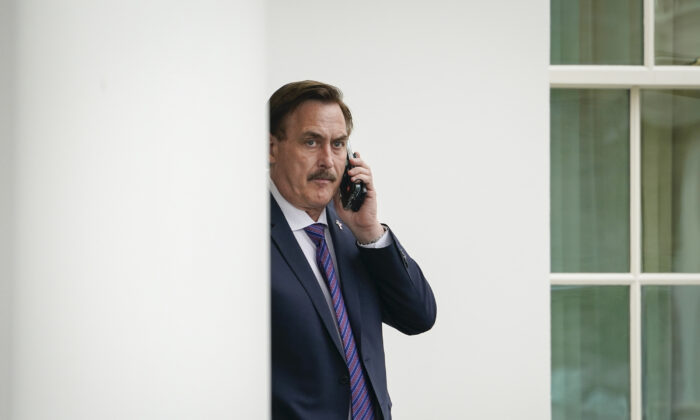 MyPillow CEO Mike Lindell waits outside the West Wing of the White House before entering in Washington, on Jan. 15, 2021. (Drew Angerer/Getty Images)
Judiciary

MyPillow CEO Mike Lindell is being investigated by the Justice Department (DOJ) over alleged identity theft and damage to a protected computer relating to an alleged breach of voting machines in Colorado, court documents show.

Lindell filed a lawsuit earlier this week against the DOJ and the FBI after agents seized his mobile phone while he was at a Hardee’s drive-through in Mankato, Minnesota, earlier this month.

His lawyers have argued that the phone seizure violated his First, Fourth, Fifth, and Sixth Amendment rights.

According to the lawsuit, the search and seizure warrant was issued by Magistrate Judge Tony N. Leung on Sept. 7, 2022.

It states that all records and information on Lindell’s phone that “constitute fruits, evidence, or instrumentalities of violations” of the alleged acts should be searched.

It further states that Lindell is among several other individuals, including Mesa County, Colorado, election clerk Tina Peters, who are part of an investigation into the alleged security breach of voting equipment in Mesa County.

Peters was indicted by a grand jury in March, accused of being part of a “deceptive scheme” to breach voting system technology that is used across the country.

Specifically, they accused her of aiding an outsider to copy sensitive data from the county’s elections systems in May 2021.

Peters has maintained her innocence and that the charges against her were “designed to erode political support from her” as she was running for secretary of state.

“Progressives in Colorado, in both political parties, continued tactics of personal destruction against Peters, in an attempt to get her to suspend her campaign and let moderate Republican candidate, Pam Anderson, win the primary,” a statement issued through her campaign read.

“All the while, the public evidence proves Tina Peters was correct to follow Colorado’s election code and preserve access logs and other vital records required to conduct a valid election audit for the Mesa County election,” the statement added.

Leung’s warrant does not provide specific details as to whether or not the FBI believes Lindell himself violated federal law or if he is a direct target in the probe and no charges have so far been levied against him.

“We can’t have the FBI weaponized against our people in the United States,” Lindell told The Epoch Times on Monday, adding that he will continue advocating for replacing voting machines with paper ballots. “This has to happen. I’m not going to ever let up.”

Meanwhile, Lindell has said that FBI agents targeted him because he has been vocal about allegations of election fraud and voting irregularities during the November 2020 general election.

His lawsuit against the DOJ and FBI claims that agents questioned him about a number of subjects relating to “Dominion Voting Systems, Tina Peters, Colorado incidents, Doug Frank, information posted on Plaintiff’s media platform, FrankSpeech.com, Dominion’s Trusted Build software update that destroyed election records, his travel on his airplane throughout the Country and to Colorado, and other matters.”

His lawyers also allege that FBI agents initially refused his request for an attorney.

“At no point did they read Mr. Lindell his Miranda rights or advise him that he had a right to have a lawyer present while being questioned,” the lawsuit states.

Furthermore, Lindell claims that he was not allowed to back up the contents of his phone, which is connected to his hearing aids, on a cloud service before FBI agents seized it from him.

“Mr. Lindell has no ready access without his cell phone to passwords that are necessary for his access to essential computer programs, and financial transactions through the company banks,” the lawsuit states. “The cell phone is also programmed to operate Mr. Lindell’s hearing aids.”