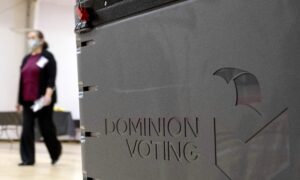 Mike Lindell, CEO of MyPillow, speaks during a rally on the National Mall in Washington on Dec. 12, 2020. (Samira Bouaou/The Epoch Times)
US News

MyPillow CEO Mike Lindell is pulling all advertisements from Fox News after the network rejected one of his ads.

“I pulled them all, every one of them,” Lindell told The Epoch Times.

Lindell sent a one-minute ad promoting a cyber symposium he’s holding next month to Fox and other networks. The ad, which was viewed by The Epoch Times, urges listeners to tune into the symposium, which will take place from Aug. 10 through Aug. 12, by going to Lindell’s social media website, Frank.

Fox did not dispute rejecting the ad.

“It’s unfortunate Mr. Lindell has chosen to pause his commercial time on FOX News given the level of success he’s experienced in building his brand through advertising on the number one cable news network,” a spokesperson told The Epoch Times in an email.

Lindell said he was told by Fox that the network would not run the ad because of pending litigation. Fox was sued this year by Dominion Voting Systems and Smartmatic, as was Lindell, over election fraud reporting and claims. Both have filed motions to dismiss.

The ad does not mention election fraud, though the symposium is focused on it.

That event in South Dakota is billed as featuring elected officials and cyber forensic experts who will prove election fraud claims.

Newsmax said it is planning to air the ad. CNN and MSNBC haven’t said whether they will or will not.

“It’s going to hurt MyPillow because these are direct response ads so we lose another income stream, but I have my principles,” Lindell said. “I can’t let them do this to our country and suppress it and be part of the cancel culture.”