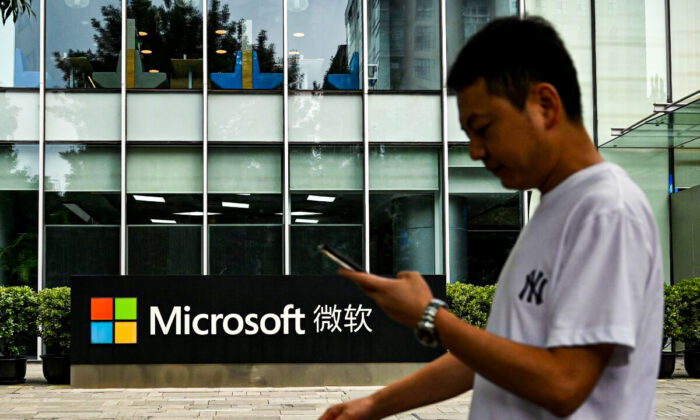 A man uses his mobile phone as he walks in front of Microsoft's local headquarters in Beijing on July 20, 2021. (Noel Celis/AFP via Getty Images)
US-China Relations

Eight major U.S. tech companies have business links to the Chinese military and security apparatus, according to a new report by the Washington-based advocacy group Victims of Communism Memorial Foundation (VoC) and Horizon Advisory consultant group.

While all of the companies examined in the report had a checkered history of business dealings with state-owned corporations, the report found that GE, Intel, and Microsoft provided “direct support” to either the Chinese military or state security organizations.

It is no secret that American companies are supercharging the Chinese Communist Party (CCP). Establishment media has hinted at the prevalence of business deals favoring CCP authoritarianism for years. The new report does, however, adds new detail to just how pervasive the trend is.

Indeed, the companies involved are reported to have helped the CCP implement its militarization of Chinese society at the highest levels.

“Apple and Intel leadership have met multiple times with top brass at the Ministry of Industry and Information Technology (MIIT), a leading Chinese state entity charged with implementing Beijing’s military-civil fusion strategy, which channels technological innovations developed or acquired in the private sector toward the Chinese military,” the report said.

Military-civil fusion refers to a strategy wherein the whole of society is mobilized to participate in the “great rejuvenation” of the Chinese nation by modernizing the CCP’s military wing, the People’s Liberation Army (PLA).

Under the strategy, all civilian technological development is encouraged to also serve a military function.

That presents a real problem for any company engaged in technology development or research in China.

For companies intentionally partnering to develop technologies with military corporations, however, the threat to the United States, as well as to Chinese civil liberties, is something more severe.

Partnerships and engagements with Chinese regime entities that support the PLA and state surveillance efforts, however, are far from rare, as the report detailed.

For example, Intel supplies, invests, and engages in technological cooperation with Chinese processor and chip design company Lanqi Technology, which is heavily invested in by China Electronics Corporation, a state-owned defense company that the U.S. Department of Defense has identified as a military entity. Intel also engaged in a $2 billion joint project with Lanqi to develop high-performance processors.

“Intel’s Global Vice President attended the signing [of the deal], as did the Chairman and [CCP] Party Secretary of China Electronics,” the report said.

Intel also previously carried out research with a company under contract to provide artificial intelligence technologies to the PLA.

“Intel’s exposure exceeds that of other companies surveyed in this effort,” the report said.

“Intel invests in Chinese high-tech and military-civil fusion companies, potentially fueling them with both capital and access to technology,” the report added.

“Intel has taken no action to curb or terminate such problematic relationships.”

Likewise, GE was found by the report to have engaged in technological partnerships with key players throughout the PRC’s military-industrial complex.

Among those players were the state-owned defense company Aviation Industry Corporation of China, listed by the United States as a military entity, and the Harbin Electric Group. Notably, Harbin maintains a dedicated military-civil fusion department that focuses on providing turbine technology to the PLA.

According to the report, GE maintains a 51 percent stake in a joint turbine venture with Harbin: The General Electric-Harbin Power-Nanjing Turbine Energy Service.

“Those partnerships have … granted military-tied Chinese players positions of leverage in GE’s supply chains, critical to both America’s national security and its manufacturing base,” the report said.

“And GE’s operations and partnerships in China systemically expose it to risks associated with forced labor and other human rights atrocities in the country.”

Microsoft’s Innovation Hub, a research center focused on artificial intelligence, meanwhile, counts among its members China Telecom, a state-owned telecommunications giant whose license to operate in the United States was revoked in 2021 over national security concerns.

Microsoft also launched strategic cooperation agreements with other companies that the U.S. government has identified as tied to the Chinese military or as otherwise under consideration for export restrictions, according to the report.

To be sure, doing business in China at all is to increasingly run a risk. Multiple Chinese laws and organizations exist to collect proprietary data and put it to work for the CCP, as the CCP considers data itself to be a “national resource.”

The VoC report is careful to note, however, that one ought not to assume merely doing business in China is wrong. Rather, its authors encourage readers to focus on the ethical doublespeak some companies engage in, championing human rights while also contributing to an authoritarian regime’s repressive technologies.

“US corporate players have no problem saying one thing in the United States while doing (and saying) something different in China,” the report said.

“Such hypocrisy is particularly flagrant when it comes to digital privacy: Companies like Apple, Amazon, Dell, and Intel that stress information security in the U.S. also abide by Chinese regulatory requirements for storing and handling data.”

“This jeopardizes the information, and therefore security, of users in China who oppose the regime, as well as of global users.”

The Epoch Times has requested comment from GE, Intel, and Microsoft.