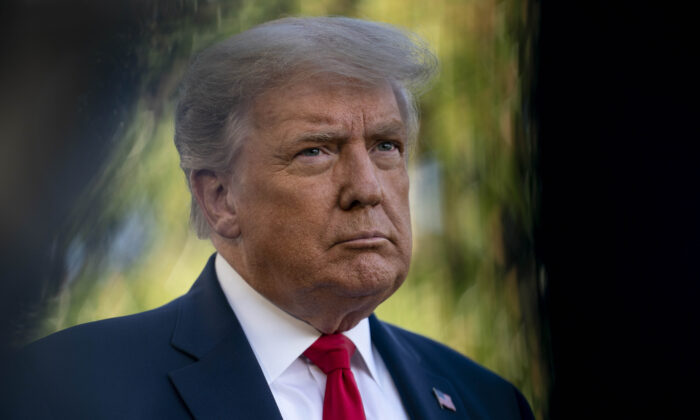 President Donald Trump speaks to members of the press prior to his departure from the White House in Washington on Sept. 19, 2020. (Sarah Silbiger/Getty Images)
US News

The Manhattan district attorney has suggested that President Donald Trump and his businesses could be investigated for criminal tax fraud, according to a new court filing on Monday.

The filing is the latest argument made by New York County District Attorney Cyrus Vance Jr. in his fight to enforce a subpoena to gain access to eight years of Trump’s tax returns and financial documents as part of a criminal grand jury probe.

Vance’s legal team had previously suggested to the court that the prosecutor’s subpoena is part of an investigation into “possibly extensive and protracted criminal conduct at the Trump Organization,” which could include bank and insurance fraud, but Monday’s filing is the first time the district attorney had suggested that his probe may include potential tax crimes.

The Manhattan DA argued that the numerous media reports detail allegations about financial misconduct by Trump and his businesses and that these reports are more than enough to uphold the subpoena.

They said that if misstatements about business properties were communicated from the Trump organization to its business partners, insurers, potential lenders, or tax authorities, then those misstatements could possibly establish a violation of state laws such as a scheme to defraud, falsification of business records, insurance fraud, and criminal tax fraud, according to the filing.

“Even if the grand jury were testing the truth of public allegations alone, such reports, taken together, fully justify the scope of the grand jury subpoena at issue in this case,” Vance’s team argued.

Prior to the recent court filings, it was widely believed that Vance was investigating hush money paid to two women during the 2016 presidential campaign: adult film performer Stormy Daniels and former Playboy model Karen McDougal. But the filings by Vance’s team suggest that the scope of the Manhattan DA’s probe might be broader than what was previously known.

After a district court rejected Trump’s claims earlier this month, the parties agreed to temporarily delay the enforcement of the subpoena. The 2nd Circuit Court also agreed to temporarily hold the district court’s ruling earlier this month. The court also set a Sept. 25 hearing to allow the parties to argue whether Trump’s claim that the grand jury subpoena is overbroad and issued in bad faith is plausible.

The district court judge had ruled that Trump’s newest challenge was a roundabout way for the president to invoke immunity from judicial processes.