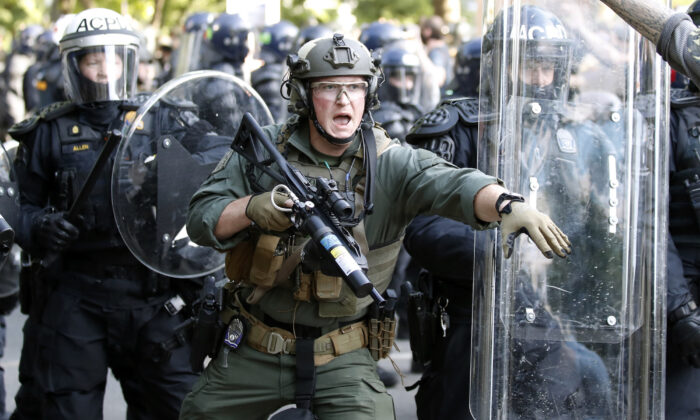 Police begin to clear demonstrators gathered as they protest near the White House, in Washington on June 1, 2020. (Alex Brandon/AP Photo)
US News

Majority of Americans Support Use of National Guard, Military to Help Address Riots

A majority of American voters told Morning Consult pollsters that they support the use of the National Guard and the U.S. military to assist law enforcement in addressing protests over George Floyd’s death in police custody, some of which have morphed from peaceful demonstrations into rioting, looting, and violence.

The poll shows that 71 percent of voters are in favor of the deployment of the National Guard to shore up local law enforcement in coping with the riots, many of which started out as peaceful expressions of grief and opposition to police brutality but then devolved into chaos.

The new poll was conducted between May 31 and June 1 on a nationwide sample of 1624 registered voters (pdf).

A smaller majority, 58 percent, of registered voters said they support calling in the U.S. military to supplement city police forces to address rioting.

Floyd died after disgraced and since-dismissed Minneapolis police officer Derek Chauvin pinned him down and pressed Floyd’s neck with his knee as the man pleaded that he couldn’t breathe. Violent demonstrations have raged in scores of American cities, marking a level of unrest unseen for decades.

The growing chaos has prompted President Donald Trump and members of his administration, most notably Attorney General William Barr, to call for a more forceful response.

“It is time to stop watching the violence and to confront and stop it. Preventing reconciliation and driving us apart is the goal of radical groups. We cannot let them succeed,” Barr said in a statement.

Responding to an outbreak of smash-and-grab looting and vandalism that tore through midtown Manhattan recently, Trump criticized New York Gov. Andrew Cuomo for his reluctance to call in reinforcements. “The Governor refuses to accept my offer of a dominating National Guard. NYC was ripped to pieces,” Trump wrote.

Trump said he is backed by a “silent majority” in seeking to implement in the nation’s capital a model for the kind of decisive law enforcement response he believes is critical to quelling the riots.

“D.C. had no problems last night. Many arrests. Great job done by all. Overwhelming force. Domination,” Trump wrote in a tweet Tuesday, after a night in which heavily armed military forces and federal officers swarmed the city.

While the strategy of getting tough on violent protesters has been met with some criticism, chiefly from Trump’s political opponents, the new Morning Consult poll suggests most everyday Americans look favorably on more forceful methods to deal with protests that get out of hand.

The poll also shows that support for a tougher response is bipartisan. While 86 percent of respondents who said they voted Republican in the 2018 House vote said they either “strongly support” or “somewhat support” calling the National Guard to supplement city police forces, 65 percent of those who voted Democrat two years ago also expressed their support for such reinforcements.