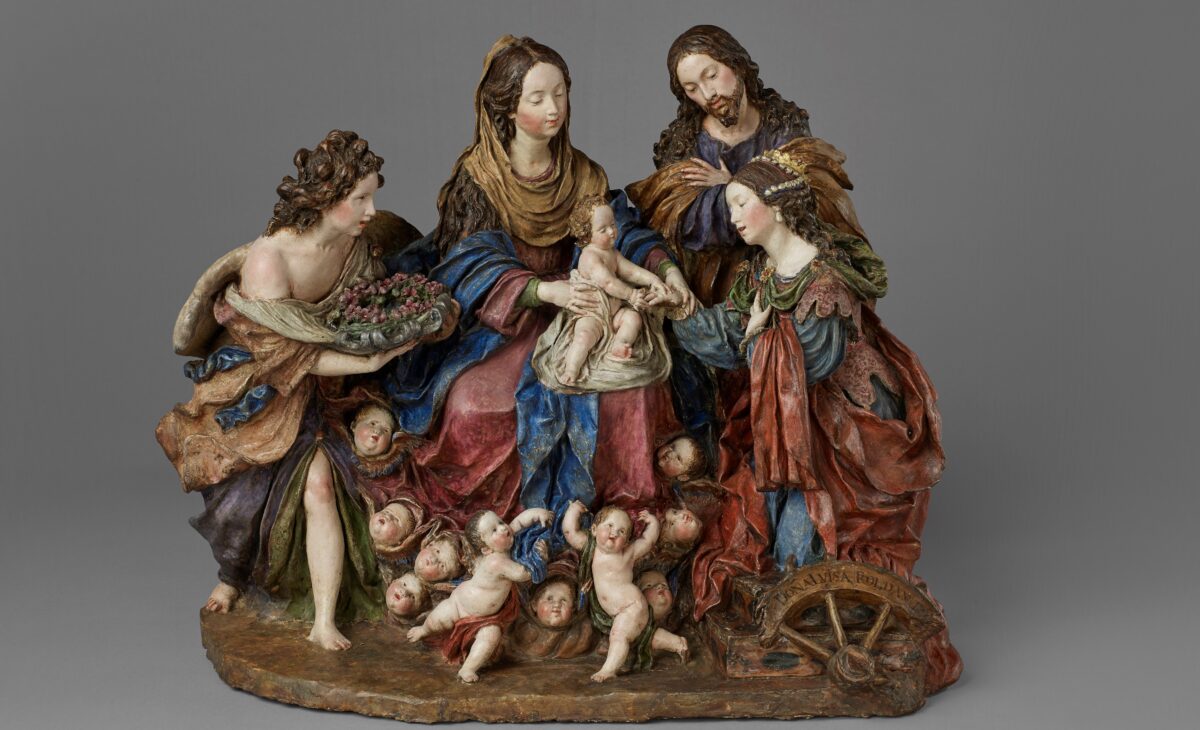 Made for the Devout: The Gloriously Colorful World of Hispanic Sacred Sculptures

Unpainted stone, marble, or bronze sculptures dominate Western sacred art, largely thanks to Renaissance giants such as Donatello and Michelangelo, Baroque sculptor Gian Lorenzo Bernini, and neoclassical sculptor Antonio Canova. Therefore, when we think of sacred art, polychrome sculptures may not be at the forefront of our minds—unless we’ve spent time in Latin America or the Iberian Peninsula, that is, Spain or Portugal.

In the Hispanic world, sacred sculptures are polychromatic—colorfully painted. Each piece is purposefully infused with intense emotions, gestures, and vitality—all explicitly designed to teach Scripture and to inspire contemplation and devotion to God. Believers developed intimate relationships with these sublime, functional pieces.

For many of us, the passion and sometimes graphic emotionality conveyed in Hispanic sacred art may feel foreign. Indeed, it’s only relatively recently that scholars have taken more of an interest in the art form. That interest was piqued by the 2009 exhibition “The Sacred Made Real,” which was organized by The National Gallery in London and The National Gallery of Art in Washington, Patrick Lenaghan told me in a telephone interview. Lenaghan is the head curator of prints, photographs, and sculpture at The Hispanic Society Museum & Library (HSM&L) in New York.

Hispanic polychrome sculpture between 1500 and 1800 is the focus of the society’s recently opened exhibition “Gilded Figures: Wood and Clay Made Flesh.” Curated by Lenaghan and his colleague Hélène Fontoira-Marzin, the HSM&L’s head of conservation, the exhibition brings together over 20 wood and clay sculptures—nearly all of which are from HSM&L’s own holdings.

Through these works, the exhibition explores the different types of public and private sacred art in Spain and how this Spanish art tradition influenced Latin American sculpture.

Believers Depicted in the Sculptures

The sacred sculptures of the Hispanic world acted as instruments of faith: to inspire devotion. Lenaghan said that the sculptures were made for believers to engage with. They’re “part of a living culture.”

One of the ways the faithful engaged with the art was to appear in the artwork itself. In the “Resurrection,” a jubilant golden narrative sculptural relief by celebrated Spanish sculptor Gil de Siloé, Christ has risen and stands in the center atop his tomb. To the right, he’s seen meeting disciples on the road to Emmaus. To the left, the three Marys come looking for the resurrected Christ. Surrounding Christ’s tomb, soldiers are collapsed in a deep slumber. Only one of these men bears witness to Christ’s miracle. He kneels in reverence—looking up at Christ in pious adoration. Lenaghan believes that de Siloé added the patron’s likeness to the reverent man, depicting him as the captain of the soldiers, to recognize the patron’s strong faith.

“Gil de Siloé was a very sophisticated sculptor in how he organized the scenes across the compositional picture plane to bring out the theological nuances and details that were appropriate to the context and the subject,” Lenaghan said. He added that the piece points to a very strong understanding of theology, but to be able to translate that into something that works visually is another thing.

Oftentimes, sculptures by the same sculptor could ultimately appear very different, due to the involvement of different artisans. Patrons often received their commissioned statues unpainted. It was up to them to arrange for a painter to embellish the works and make the pieces as lifelike as possible. For naturalistic appeal, they often embellished the sculptures with glass eyes, ivory teeth, and real eyelashes. In some cases, the works were dressed in costumes.

A few sculptors did oversee the painting of their pieces. For instance, royal sculptor Luisa Roldán’s brother-in-law painted her sculptures, resulting in a consistent aesthetic to her works. But once a piece left her workshop, its color and appearance could, and often did, change.

Repainting pieces to align with popular sensibilities was a common practice. In the exhibition, a couple of Roldán’s terracotta sculptures demonstrate this practice well. Lenaghan explained that these pieces of Roldán’s acquired a totally different look once they left the workshop, and were transformed from their original bright, high-keyed color palette to more sober hues.

The Hispanic Society’s conservator Fontoira-Marzin spent the past 20 years patiently bringing the pieces back to their original state. Thanks to Fontoira-Marzin, visitors to the exhibition can now enjoy the colors of Roldán’s terracottas close to her original intention.

Look closely at some of the sculptures in the exhibition and you can literally see “the scars of their use,” Lenaghan said. The piece “Blessing Christ Child” by Alonso Martínez has abrasions on its neck and arms. Over the years, the statue of the naked Christ has been dressed in different costumes, causing the paint to wear away in those areas where the clothing was pulled on and off.

The way the owners of the sculptures often altered them is fascinating. In the exhibition, Pedro de Mena’s beautiful bust of a man is sensitively rendered with glass eyes, a trim mustache, and a slightly opened mouth. On closer inspection, one notices that his throat has been slit and he is aghast. His facial expression is full of shock and despair. The bust is of St. Acisclus, a former Roman soldier martyred in the fourth century for staying true to his faith.

The bust was originally a fuller, more evocative figure. An old photograph shows the statue complete with forearms and a torso. Glass tears once fell down the man’s face, and much more blood seeped from his neck. “Its original look made the point more emphatically about persevering in your faith in the face of such suffering,” Lenaghan said. He believes the figure was toned down and reduced to a bust, perhaps in a nod to the busts of antiquity, to make the sculpture more desirable to buyers.

Another case where the sculpture has been altered is that of a crucifixion. It’s a piece that completely puzzled Lenaghan as to who the sculptor was. In it, Christ is on the cross and the Virgin Mary at his foot. The Hispanic Society bought it at an auction, with no time to make an attribution. He soon realized that the Virgin was by 19th-century Spanish sculptor Manuel González Santos, but the crucifixion didn’t reflect the sculptor’s style at all. Lenaghan was stunned when a friend strongly suggested that the work was by Pablo de Rojas, a major 17th-century Spanish sculptor. “I was stunned because it’s quite a coup to have a statue by Pablo de Rojas,” he said. Lenaghan now believes that the Virgin was added by an owner some 200 years later.

Influence on the New World

When the Spanish came to the New World, religious sculptures were important in converting the indigenous population to Catholicism. Wherever possible, Spanish sculptors passed on their Western techniques to local sculptors, resulting in Latin American devotional works acquiring a Spanish style. For instance, two pieces in the exhibition—“St. Francis” and the “Mater Dolorosa”—were believed to be Spanish works up until recently, when they were reattributed to Mexican artists.

Sometimes Latin American artists adapted the Spanish style, and the sculptures took on a distinctly local flair. For instance, in Spain gold was commonly used as a ground, a base layer on the sculptures to which paint was applied. Artists would then scratch designs through parts of the painted surface to reveal the gold beneath. Some of the gold remained concealed under the paint, which further enhanced the paint pigments. Lenaghan explained that artists in Quito, Ecuador, used gold and silver grounds in their statues. This practice had existed in Spain, but the Ecuadorian sculptors used it to more dramatic effect, frequently juxtaposing it with gold.

Lenaghan explained that Quito was the fourth largest city in the New World—only Lima, Havana, and Mexico City outstripped it. Part of Quito’s wealth came from its numerous silver mines. The “Virgin of Quito” and “St. Michael Archangel” are a couple of examples of Quito workmanship in the exhibition, where both gold and silver grounds were used. The use of the silver ground in those pieces produced a heightened intensity of the reds and blues, giving the works an electric quality.

One of the exhibition highlights is also from Quito: “The Four Fates of Man,” attributed to Manuel Chili, better known as Caspicara. It’s a particularly moving piece, explicitly taking the viewer through the various consequences of leading an immoral life versus a virtuous one following holy precepts. Little is known about the work; there are no known sculptural forms like it.

Caspicara may have had an approximate guide for the iconography and the theological concept from Neapolitan wax figures showing souls in hell, Lenaghan explained. He’s impressed by the details on such a small set of figurines that speak to an incredibly talented and deft touch.

Lenaghan said: “As the 18th century develops, and neoclassic canon and aesthetic begins to make inroads in Spain, there is more restraint and perhaps less overt emotion in some statues. … But the emotional importance of the subjects being depicted … never leaves the stage because in this pre-modern world, I think sanctity comes through suffering. And so you measure holiness by how much you’ve suffered, and your commitment to your faith.”

The exhibition “Gilded Figures: Wood and Clay Made Flesh” at The Hispanic Society Museum & Library in New York runs through Jan. 9, 2022. To find out more, visit HispanicSociety.org