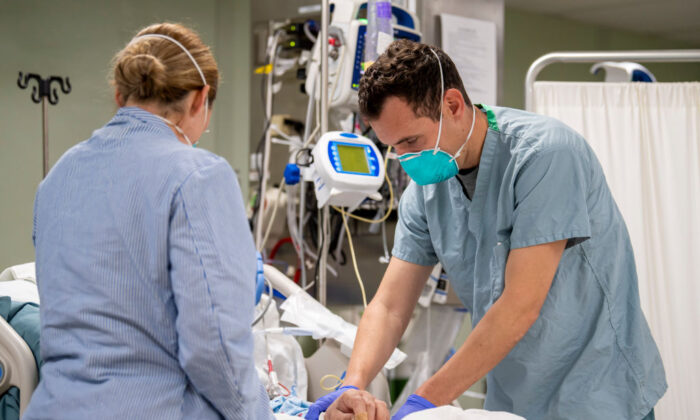 While the world waits for a definitive treatment, cure, or vaccine for COVID-19, studies have shown a significant correlation between a low level of vitamin D in the blood and a greater risk of infection.

The findings reveal a need for more robust data to determine whether vitamin D can prevent the disease or be used as an adjunct therapy.

Vitamin D, commonly known as the sunshine vitamin, is a hormone with a vast array of benefits over and above bone and muscle health. It may also strengthen the immune system, protect against cardiovascular disease, help prevent colon cancer, and more. It comes in two major forms: vitamin D3, which is produced by the body, and vitamin D2, which is found in plants.

Pending conclusive evidence on vitamin D’s effects on COVID-19, doctors are stressing the importance of people having their levels checked to ensure they have an adequate level of the nutrient.

Dr. Kecia Gaither told The Epoch Times in an email that she screens her patients’ vitamin D levels. Women who are pregnant or breastfeeding, in particular, may not have enough vitamin D. And it’s even more important now because “patients with adequate vitamin D levels have been found to have lesser morbidity and mortality from COVID-19 than those that were deficient,” Gaither wrote.

“Along with vitamin D supplementation, adequate sunshine exposure is needed, particularly if melanated [darker skinned], because vitamin D is made in the skin,” Gaither said. “Melanin inhibits vitamin D production in the skin.”

Melanin is a skin pigment that makes the skin, eyes, and hair darker. Black Americans are in a high-risk group for having low vitamin D levels because, while their darker skin can protect them against skin cancer, it also reduces the production of vitamin D. Black people have been found to have a higher COVID-19 death rate.

Lead researcher Steve Farrell said, “Some of the health disparities that we see in African American adults may be partially due to the high prevalence of vitamin D deficiency in this population.”

Symptoms of vitamin D deficiency may include osteoporosis or bone thinning and weakness, bone and muscle pain, depression, fatigue, and frequent infections or illnesses.

Dr. Mike Hansen, pulmonologist and critical care physician, says in a video on COVID-19 that many “COVID-19 patients who require hospitalization do have low vitamin D levels, and this is consistent with what we’re seeing.”

To treat vitamin D deficiency, exposing skin to direct sunlight for 15–30 minutes, avoiding sunburns, along with incorporating foods such as salmon, white mushrooms, and cod liver oil may be enough for some people to reach adequate vitamin D levels. For others, a vitamin D supplement is recommended through their physician.

Dr. Abe Malkin wrote in an email to The Epoch Times that generally, a “safe daily supplement dose would be 2,000 IU [international units] daily, but for those who are more deficient, they can take up to 5,000 IU daily.” Malkin, who is the founder and medical director at Concierge MD LA, says zinc and vitamin C supplements should be taken at the same time “to help bolster the immune system.”

The National Institutes of Health’s Office of Dietary Supplements recommends 600 IU for people up to 70 years old, and 800 IU for adults 71 and older.

Although rare, vitamin D toxicity may occur when too much of the nutrient is consumed, typically in the form of supplements, and for a long time. This causes excessive calcium in the blood as vitamin D assists the body in absorbing and regulating calcium, causing symptoms of “nausea, vomiting, weakness, kidney issues, and bone pain,” according to Gaither.

“Those who have elevated levels of vitamin D naturally should not take a supplement,” Malkin said. “This would be determined by a blood test to check vitamin D levels.”

An observational study that examined the levels of vitamin D in 7,807 people who were tested for COVID-19 in Israel, found that the average plasma vitamin D level was remarkably lower among the 782 who tested positive compared to the 7,025 negatives, showing an independent association between low blood levels of vitamin D and the occurrence and severity of COVID-19. The circulating form of vitamin D in the body is called 25(OH)D, which is tested to determine vitamin D deficiency or toxicity.

But researchers in a study in the UK said that their findings “provided no evidence to support a potential role for (25(OH)D) concentration to explain susceptibility to COVID-19 infection either overall or in explaining differences between ethnic groups.” The study recruited 348,598 individuals (but only 449 tested positive for COVID-19) from the UK Biobank to examine whether their plasma vitamin D levels correlated with COVID-19 risk using the participants’ baseline 25(OH)D that was recorded 14 years ago, between 2006 and 2010.

The study’s use of the participants’ baseline measurements from over a decade ago raised concerns from several scientists who co-authored a response arguing that the baseline assessment was not “representative of the current level as concentrations ‘generally track over time.’” They concluded that the vitamin D and COVID-19 association still remained unclear, and that “whilst deficiency may not be associated with risk of incidence, it may still be associated with risk of severity, which this paper does not examine.”

Not Waiting for Results

The Scottish government updated its guidance on vitamin D on July 29 stating “it is important that people maintain sufficient levels of vitamin D” and that people in high-risk groups should “take a daily supplement.”

The French National Academy of Medicine had already begun stressing the importance of vitamin D against COVID-19 in May. Recommendations the organization made were for anyone under 60 to take a vitamin D supplement of 800–1,000 IU immediately after a COVID-19 diagnosis was confirmed. For adults 60 and older with COVID-19, they should receive a vitamin D testing, “and if deficiency is found, a bolus dose of 50,000–100,000 IU” is given.

Dietary supplements are not regulated by the U.S. Food and Drug Association, so they don’t need to meet the same strict requirements as medications. To know if you’re purchasing a quality supplement, check for a “third-party tested” label on the bottle as well as a USP verification, and choose brands with a good reputation.

It’s best to consult with your physician to ensure you’re taking the right amount.