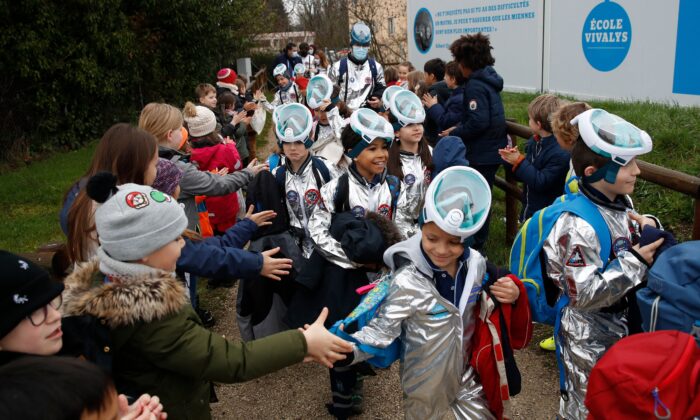 Children shake hands with pupils of the Ecole Vivalys elementary school, wearing spacesuits costumes, as they leave school during their project Mission to Mars in Lausanne, Switzerland, on March 17, 2021. (Stefan Wermuth/AFP via Getty Images)
CCP Virus

Symptoms of long COVID aren’t common in children, according to a Swiss study published in the Journal of the American Medical Association on July 15.

Long COVID, also known as long-haul COVID or post-acute COVID-19, is a condition in which people experience ongoing or new symptoms four or more weeks after first being infected with the CCP virus, which causes the disease COVID-19. The condition may occur in people who have had severe or mild COVID-19 illness or after receiving a COVID-19 vaccine.

The Ciao Corona, a longitudinal cohort study, found “a low prevalence of symptoms compatible with long COVID in a randomly selected cohort of children” from Switzerland six months after a SARS-CoV-2 antibody or serology test.

“This study reports the distribution of symptoms compatible with long COVID on a population level; it did not capture severe SARS-CoV-2 infections because they are rare in children,” the authors of the study wrote. SARS-CoV-2 is the scientific name for the CCP virus.

Several thousand students aged 6 to 16 years from 55 schools in the district of Zurich volunteered to have their blood taken for serological testing in three phases between June 2020 and April 2021. Parents were also asked to report symptoms that lasted for at least four weeks or persisted for more than 12 weeks since October 2020 in an online questionnaire.

Switzerland kept schools open during the pandemic last year except from March 16 to May 10, when the country went into lockdown during the first wave. Swiss authorities didn’t consider children to be the primary drivers of the virus and only put in place preventative measures such as hand hygiene, physical distancing, and mask-wearing for kids aged 12 and older.

Of the 2,503 students, with a median age of 11, who had a serology test in October or November, only 1,355 were included in the study. Those who were excluded from it consisted of 238 students who tested negative for antibodies but later became positive, 292 students who weren’t retested by March or April 2021, and 618 who didn’t provide information on their symptoms.

The researchers then compared the students who had a positive SARS-CoV-2 antibody test (seropositive) with those who tested negative (seronegative).

Some of the limitations of the study include the small number of children who tested positive for antibodies, parental reports of their child’s symptoms, and “possible misclassification of some children with false seropositive results.”

The findings add to the research to understand the frequency and severity of long COVID in children, as results from earlier studies were “predominantly limited to select populations without control groups, which does not allow estimating the overall prevalence and burden in a general pediatric population,” according to the study.

In a different study posted as a preprint in May, researchers who had been tracking COVID-19 infection rates in students in grades 8–12 in Eastern Saxony, Germany, conducted a survey of 1,560 students in March and April 2021 to “better understand the symptoms of long COVID-19 in adolescents and to distinguish infection-associated symptoms from pandemic-associated symptoms.”

They found “no statistical difference comparing the reported symptoms” between the 188 seropositive students and 1,365 seronegative students, suggesting that long COVID may be “less common than previously thought and emphasizing the impact of pandemic-associated symptoms regarding the well-being and mental health of young adolescents.”

While recent studies suggest that long COVID is rare for children on average, there’s still much to learn about the condition for those who are affected. There’s currently no clear clinical definition for long COVID in children, which makes it difficult for doctors to differentiate between long COVID and other conditions and who is most at risk.