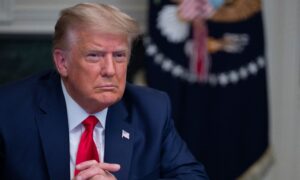 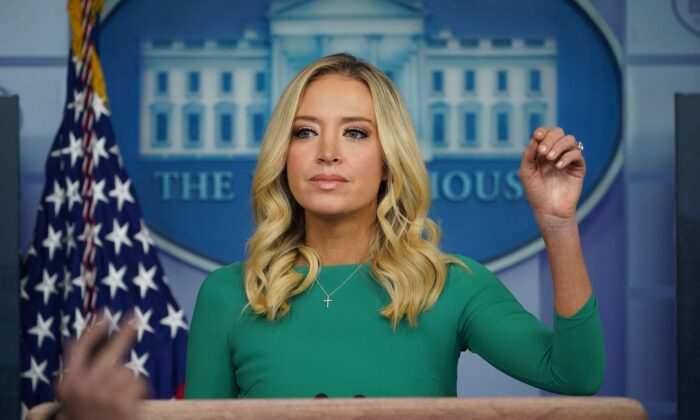 White House press secretary Kayleigh McEnany takes questions from the media during a press briefing in the Brady Briefing Room of the White House in Washington Nov. 20, 2020. (Mandel Ngan/AFP via Getty Images)
Pennsylvania

“I think the Third Circuit court judge misunderstood the argument,” McEnany said Saturday during an interview on “Fox & Friends,” referring to Trump-appointed Circuit Judge Stephanos Bibas, who delivered the opinion of the three-judge panel of the Third Circuit Court of Appeals.

Bibas, joined by two George W. Bush appointees, wrote that the lawsuit lacked merit, and that tossing out millions of Pennsylvania’s mail-in ballots would be “disenfranchising a huge swath of the electorate” and “upsetting all down-ballot races.”

The Trump campaign’s Pennsylvania lawsuit, according to McEnany, was grounded on the argument that different ballot-counting procedures for the state’s predominately Democratic and Republican counties have violated the Fourteenth Amendment’s guarantee of equal protection under the law.

“If you were in the seven blue counties in Pennsylvania, you were given an extraordinary opportunity to fix your mail-in ballot, to cure your ballot,” McEnany said. “But if you were in the other 60 mainly Republican counties, you didn’t get that privilege, and that’s an equal protection violation.”

“We have a right to ask these questions, and we have presented affidavits, and there are declarations made as well,” she continued. “So there is evidence there, and it’s important for the Supreme Court, we feel, to take a look at this.”

McEnany, who is also a senior adviser for the Trump campaign, said that the organization is optimistic about its legal battles, including an effort to appeal the Pennsylvania case to Supreme Court.

“The activist judicial machinery in Pennsylvania continues to cover up the allegations of massive fraud,” Ellis wrote. “We are very thankful to have had the opportunity to present proof and the facts to the PA state legislature. On to SCOTUS!”

Last week, Trump phoned into a hearing held by Pennsylvania Republicans on the state’s election issues, saying that Democratic nominee Joe Biden appears to be winning because of widespread voter fraud.

“This was an election that we won easily. We won it by a lot,” Trump said.