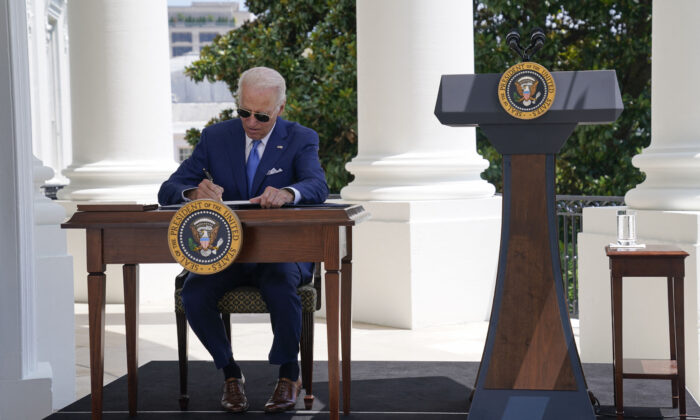 “This morning, his SARS-CoV-2 antigen testing was negative,” White House physician Dr. Kevin O’Connor wrote in a statement. “In an abundance of caution, the President will continue his strict isolation measures pending a second negative test as previously described.”

O’Connor didn’t mention in the update whether the president still has a cough, which the president’s physician said on Friday has “almost completely resolved.”

The White House announced that Biden will travel to eastern Kentucky on Monday to survey the damages caused by the Appalachia floods along with Kentucky Gov. Andy Beshear.

The announcement caused quite a stir among the reporters as Biden still tested positive on Friday morning.

“You have announced the travel for Monday to Kentucky, but you did not indicate whether that is contingent on the President’s COVID status. And you said the pool would be covering that as well,” a reporter questioned White House press secretary Karine Jean-Pierre. “So will he be going to Kentucky regardless of his COVID status, and will a full pool accompany him?”

Jean-Pierre later clarified that Biden will not travel unless he is negative.

“He would not do that,” she added.

Biden tested positive again on July 30 after he recovered from his previous COVID-19 infection.

O’Connor said what the president had is a rare “rebound” case usually observed in a small percentage of patients treated with Paxlovid.

Paxlovid is recommended by the Centers for Disease Control and Prevention (CDC) for early-stage treatment of mild to moderate COVID-19 among high-risk patients.

“COVID-19 rebound has been reported to occur between two and eight days after initial recovery and is characterized by a recurrence of COVID-19 symptoms or a new positive viral test after having tested negative,” CDC said in a health advisory in May.

No evidence shows that additional treatment is needed in the so-called COVID-19 rebound cases.

Researchers from the University of California–San Diego School of Medicine said the rebound may be caused by insufficient exposure to the drug.

However, the researchers said more information is needed to determine if adjustments are necessary for treatment plans with Paxlovid.

Read the full letter from the White House physician: