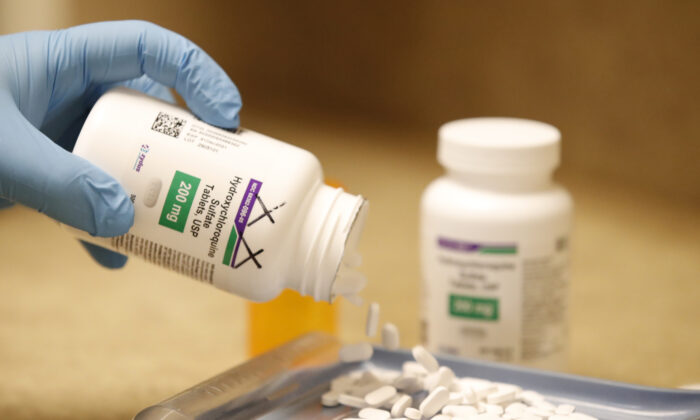 A triple-drug cocktail containing the anti-malarial drug hydroxychloroquine significantly lowered the hospitalization and the death rate of COVID-19 patients, a peer-reviewed study suggests.

The study, led by Dr. Vladimir Zelenko in partnership with German doctors Martin Scholz and Roland Derwand, examined the effectiveness of the triple therapy containing zinc, low-dose hydroxychloroquine, and azithromycin on 141 COVID-19 patients aged between 40 and 67.

This peer reviewed paper is on the Zelenko Protocol which is based on Dr. Zelenko’s first in the world out-pt data. Shows 84% reduction in hospitalization and death. Special thanks to my co-authors, Drs. Derwand and Scholtz. Id high risk pts and tx ASAP. https://t.co/2BOwbEnilQ

The study, which determined that “Low-dose hydroxychloroquine combined with zinc and azithromycin was an effective therapeutic approach against COVID-19,” is set to be published in the International Journal of Antimicrobial Agents in December.

Patients who tested positive for the CCP (Chinese Communist Party) virus received a prescription for the triple therapy for a period of five days, and were compared to a control group of 377 confirmed COVID-19 patients, who did not receive the treatment.

Of the treated patients, one patient (0.7 percent) died, compared to 13 patients (3.4 percent) in the untreated group, the researchers said.

“Risk stratification-based treatment of COVID-19 outpatients as early as possible after symptom onset using triple therapy, including the combination of zinc with low-dose hydroxychloroquine, was associated with significantly fewer hospitalisations,” they wrote.

The study states that in general, the triple therapy was well-tolerated, with 30 patients (21.3 percent) reporting weakness, 20 (14.2 percent) nausea, 15 (10.6 percent) diarrhoea, and 2 (1.4 percent) rash. The doctors totted that no patient-reported palpitations or any cardiac side effects.

Hydroxychloroquine and the closely related chloroquine have been closely scrutinized since President Donald Trump touted them earlier this year as potential treatments for COVID-19, a disease caused by the CCP virus. The drugs were prescribed for both hospitalized and non-hospitalized patients across the United States after anecdotal accounts suggested some efficacy against COVID-19.

Some clinical trials later found the anti-malarial was ineffective in certain dosages. Two trials studying the drug were stopped in the summer.