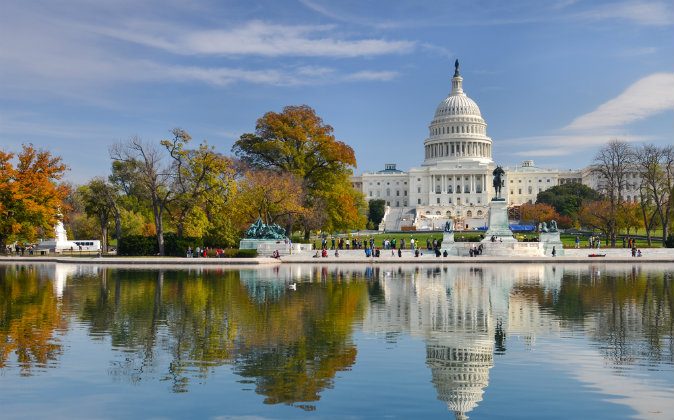 The U.S. Capitol in Washington is shown in an undated file photo. (Shutterstock)
By Joseph Lord

The House of Representatives on Sept. 22 passed a Democrat-sponsored package of policing bills amid intraparty divisions on the issue due to some progressives’ objections.

The bills—which observers have pegged as a last-minute attempt by Democrats to beef up their public safety credentials amid GOP accusations of being “soft-on-crime”—faced drawn out negotiations between moderates and progressives.

Moderate Democrats hope that the package will help them fight off GOP criticism of violent crime rates rising across the United States. But some progressive Democrats have been hesitant to accept the package without stricter regulations on local police departments. Such regulations, in turn, ran the risk of souring GOP lawmakers on the proposals.

One of the four bills, sponsored by moderate Rep. Josh Gottheimer (D-N.J.), furnishes federal grants to local police departments with fewer than 125 officers. Another, sponsored by Rep. Steven Horsford (D-Nev.), provides targeted grants to communities with unusually high rates of criminal violence. The third bill in the package, this one sponsored by Rep. Katie Porter (D-Calif.), achieves a longtime Democrat goal of incentivizing the use of mental health officials to respond to situations instead of police officers, whenever feasible. The final bill of the bunch, put forward by Rep. Val Demings (D-Fla.), provides funding for enhanced investigative technologies to solve unsolved cases with a focus on gun violence cases.

Rep. Joyce Beatty (D-Ohio), who heads the Congressional Black Caucus and led negotiations between the disparate elements of the party, applauded the final package.

The package is the culmination of months of negotiations between Gottheimer and prominent progressive Rep. Pramila Jayapal (D-Wash.), who leads the 96-strong Congressional Progressive Caucus, and Rep. Ilhan Omar (D-Minn.).

In a joint statement, Jayapal and Omar also applauded the final package.

“With this package, House Democrats have the opportunity to model a holistic, inclusive approach to public safety, and keep our promise to families across the country to address this issue at the federal level,” the duo wrote.

The deal to secure passage was reportedly agreed to on the evening of Sept. 21, but doubts still lingered as to its prospects.

As the House gathered on Sept. 22 for a procedural vote on the debate rules, the fate of the package remained uncertain, as progressives in the party continued to threaten to oppose it without further concessions. House Majority Leader Steny Hoyer (D-Md.) went ahead with the vote despite the uncertainty, and the tense procedural vote ended in a success for the majority party, setting the stage for the bill’s ultimate passage.

All but one of the chamber’s 212 Republicans—Rep. Liz Cheney (R-Wyo.), who was absent—voted against the adoption of the debate rules.

Republicans, who have long been pro-police, tied their opposition to the fear that the package would federalize the police and lower local policing standards.

“They don’t want to fund the police—they want to addict the police to the federal dollar,” said Rep. Matt Gaetz (R-Fla.) in a speech on the House floor condemning the bill.

Republicans also accused the majority party of political pandering and hypocrisy with the bill.

In the past, particularly in the wake of the death of George Floyd in 2020, many Democrats adopted overtly anti-police rhetoric and flirted with the idea of defunding the police, which had been a fringe progressive position before.

Republicans devoted much of their comments on the floor to pointing out the proximity of the November midterms and accusing Democrats of being disingenuous and hypocritical with the presentation of the bills now.

Still, each piece of the package of bills received differing levels of partisan support.

One of the bills meant to furnish better access to mental health resources to local law enforcement was generally well-received by Republicans, and passed along substantially bipartisan lines.

By contrast, another piece of the package that would seek to replace police officer response with mental health expert response in some situations passed along mostly partly lines, with only a small handful of Republican votes in favor of the measure. Republicans also broadly opposed a measure that would fund violence intervention programs.

Another bill, the one that grants additional funding for solving unsolved cases, received substantially more GOP support, with about 30 Republican members voting in favor of the measure.

With the passage of the bills through the House, they will now go to the Senate, where they may face steeper odds over GOP opposition. The votes on Sept. 22 demonstrated overwhelming GOP opposition to the package as a whole, and it remains unclear whether the bills will be able to garner the support of at least 10 Republican senators to overcome the 60-vote filibuster threshold.

If the Senate does pass the bills, it is likely that President Joe Biden will sign them.