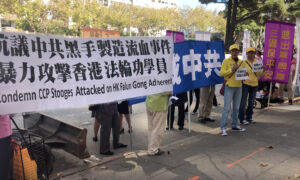 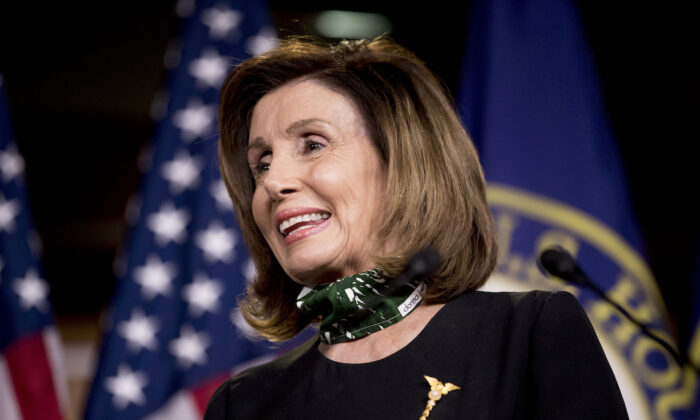 House Speaker Nancy Pelosi smiles during a news conference on Capitol Hill in Washington, on May 14, 2020. (AP Photo/Andrew Harnik)
Politics

The House of Representatives passed the Democrat-proposed $3 trillion HEROES Act on Friday, potentially setting up the possibility for more stimulus checks to be sent out to Americans amid the CCP virus pandemic, but the White House has threatened to veto the legislation, and Republicans in the Senate said it would not pass in the upper chamber.

House Speaker Nancy Pelosi (D-Calif.) and other Democrats have rallied behind the measure. Passed in a 208-199 vote in the House, the measure seeks to provide $1,200 deposits and checks for those who are eligible, but also give $1,200 for children, instead of $500 in the CARES Act, which was signed into law in March. Up to $6,000 can be provided under the new legislation.

“Today, the House will consider The Heroes Act to honor those on the frontlines—our health care, first responders, teachers, transit, food, and other essential workers,” Pelosi wrote in a statement on Friday. “Many of them risked their lives to save lives and now they may lose their jobs.”

The HEROES Act, which also hands out more funding to state and local governments, would “make a tremendous difference not only in the budgets of the states but in the lives of the American people: their public health, the education of our children, the sanitation so important to defeating the virus, with the support of so many essential workers,” she added.

It would provide $200 billion for essential workers who have been employed during the CCP (Chinese Communist Party) virus pandemic. An extension of the Paycheck Protection Program is included in the $3 trillion bill, as well as COVID-19 emergency grants.

Meanwhile, the current student loan payment plans established in the CARES Act would be extended, and the new bill would provide up to $10,000 in debt relief for a private student loan.

The second-round payment also would not be garnished by creditors or debt collectors, which is in contrast to the CARES Act, which does not offer such protections. The IRS, in the first round stimulus payment, could use some of that money to pay back past-due child support, which would not be the case under the current iteration of the HEROES Act.

The White House, however, said it will veto the measure, saying Democrats are “more concerned with delivering on long-standing partisan and ideological wish lists than with enhancing the ability of our nation to deal with the public health and economic challenges we face.” according to The Associated Press.

The Trump administration’s statement noted that Democrats, in the measure, want certain illegal immigrants to be eligible for the second round of $1,200 payments, a bailout of the U.S. Postal Service, and perhaps most significantly, funding vote-by-mail and same-day voter registration.

Senate Majority Mitch McConnell (R-Ky.) told Fox News that the bill won’t pass in the Senate. The House proposal is a “liberal wish list,” “a parade of absurdities that can hardly be taken seriously,” and “unsalvageable,” he said.

“There’s a high likelihood we’ll do another bill,” McConnell stressed.