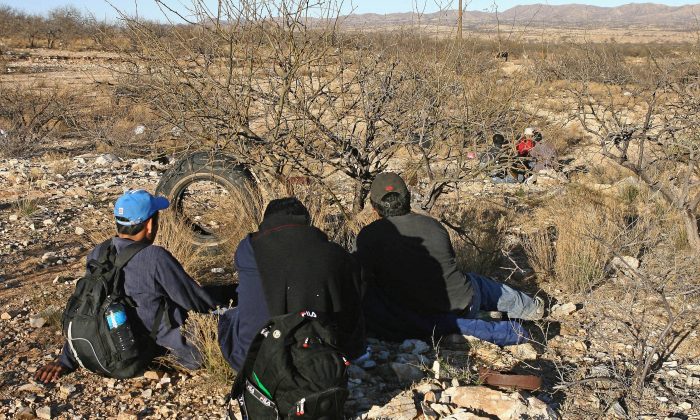 Mexican immigrants take a rest behind bushes in the Arizona Desert near Sasabe, Sonora State, during an attempt to illegally cross the U.S.-Mexico border, on April 6, 2006. (Omar Torres/AFP/Getty Images)
Arizona

A multi-agency sting operation in Arizona involving federal agents and local police has resulted in the arrest of 39 men charged with various sex crimes with minors.

Special agents with Homeland Security Investigations (HSI) and members of the Tempe, Phoenix, Scottsdale and Mesa Police Departments, the FBI and the Arizona Attorney General’s Office joined forces in operation “Behind the Mask,” an undercover operation that targeted the demand for child sex crimes and human trafficking.

“Throughout the operational period, undercover detectives placed ads on websites commonly sought out by suspects seeking illegal sex acts,” according to HSI in a press release. “The suspects reportedly solicited and/or brokered deals for various sex acts and were subsequently arrested.”

According to HSI, the Tempe Police Department routinely conducts undercover operations in a continuous effort to combat child sex trafficking crimes and exploitation of children in the community.

HSI currently operates with over 10,400 employees that includes more than 7,100 special agents assigned to 220 cities throughout the United States. The agency also conducts operations in 80 overseas locations and 53 countries, representing the Department of Homeland Security’s largest investigative law enforcement presence at home and abroad.