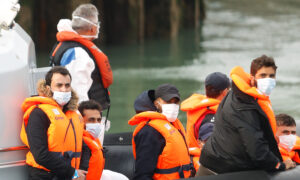 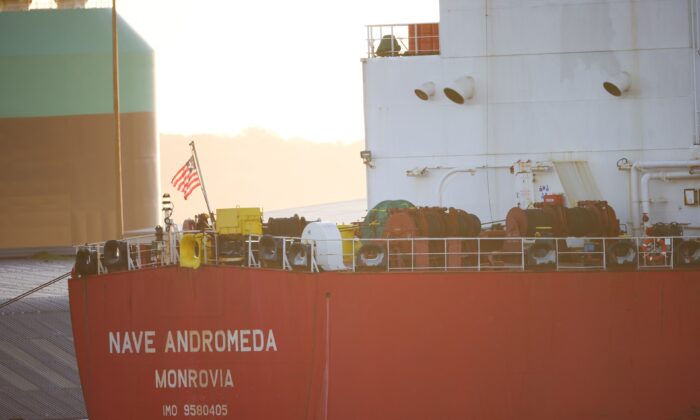 Liberia-flagged oil tanker Nave Andromeda is seen at Southampton Docks, following a security incident aboard the ship the night before off the coast of Isle of Wight, in Southampton, Britain, on Oct. 26, 2020. (Henry Nicholls/Reuters)
UK

The Greek operator of an oil tanker stormed by British forces on Sunday has expressed gratitude to the UK authorities for their handling of the incident.

British military personnel seized control of the tanker near the Isle of Wight on Sunday evening and detained seven stowaways on board, who had reportedly become threatening.

Navios Tanker Management, which operates the crude oil tanker “Nave Andromeda”, said on Monday it wished to “thank all the UK Authorities involved in this operation for their timely and professional response”.

Defence Secretary Ben Wallace and Home Secretary Priti Patel authorised the action in response to a police request, the Ministry of Defence said.

“I commend the hard work of the armed forces and police to protect lives and secure the ship,” Wallace said. “In dark skies and worsening weather, we should all be grateful for our brave personnel.”

The incident began on Sunday morning, when the master of the tanker informed the UK authorities that stowaways had been found on board and that he was concerned for the safety of the crew due to the increasingly hostile behaviour of the stowaways.

The seven stowaways had illegally boarded the tanker in Lagos, Nigeria, the Greek firm told The Epoch Times in an emailed statement.

The police received the call at 10:04 GMT, and were told the stowaways had made verbal threats towards the crew of the tanker, which was situated approximately six miles off the coast of Bembridge, Isle of Wight, according to a police spokesman representing the Hampshire Constabulary.

Police worked closely with the Maritime & Coastguard Agency and Border Force to get the situation under control. An exclusion zone, with a three-mile radius, was put in place near the vessel.

“Following a multi-agency response by police with support from the military and other emergency service partners, seven people were detained by police,” the police said in a statement emailed to The Epoch Times.

The seven men were arrested on suspicion of seizing or exercising control of a ship by use of threats or force under Sec 9(1) and (3) of the Aviation and Maritime and Security Act 1990, the police said.

“All 22 crew members are safe and well and the vessel is now alongside in the port of Southampton,” the police said. “Investigators are speaking to the crew members to establish the exact circumstances of what happened.”

Refinitiv vessel tracking data showed the Liberia-flagged Nave Andromeda had been expected to arrive in Southampton at 10:30 GMT on Sunday. The vessel had departed from Lagos, Nigeria, the data showed.

In December 2018, British forces stormed an Italian cargo ship and regained control after stowaways threatened crew as it sailed close to the southeast coast.

French police last month dismantled a migrant camp in the northern port of Calais, from where thousands of migrants have sought to cross the English Channel to reach British shores.

Several thousand migrants have attempted the crossing this year, often paying traffickers to help them traverse one of the world’s busiest shipping lanes in overloaded rubber dinghies.