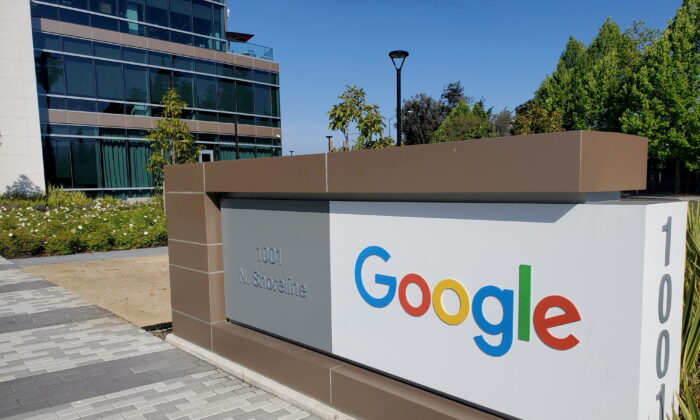 A sign is pictured outside a Google office near the company's headquarters in Mountain View, California, on May 8, 2019. (Paresh Dave/Reuters)
By Katabella Roberts

Google is banning advertisements featuring content that contradict what it called “inaccurate” content on climate change, and will no longer allow ad revenue to be made from them, the company announced in a blog post on Oct. 7.

The tech giant said the new policy will go into effect in November and will help “strengthen the integrity” of Google’s advertising ecosystem, and also align with their past work to promote sustainability and “confront climate change.”

“In recent years, we’ve heard directly from a growing number of our advertising and publisher partners who have expressed concerns about ads that run alongside or promote inaccurate claims about climate change,” the company said in Thursday’s blog post announcing the updates.

“Advertisers simply don’t want their ads to appear next to this content. And publishers and creators don’t want ads promoting these claims to appear on their pages or videos.”

Google said that those concerns are what led them to create the new monetization policy, which applies to commercials Google places online, as well as the websites and YouTube videos that run Google ads.

The updated policy prohibits advertising for and monetization of content that contradicts what Google calls the “well-established scientific consensus” on the existence and causes of climate change.

It includes any content that denies human contributions to global warming or treats “climate change as a hoax or a scam,” such as “denying that long-term trends show the global climate is warming, and claims denying that greenhouse gas emissions or human activity contribute to climate change,” Google said.

Going forward, Google will be analyzing content and considering whether it presents accurate or false claims about climate change, or whether it is simply discussing or reporting such a claim.

“We will also continue to allow ads and monetization on other climate-related topics, including public debates on climate policy, the varying impacts of climate change, new research and more,” the company said.

Google added that it consulted with “authoritative sources” on climate science—including those who have contributed to the United Nations Intergovernmental Panel on Climate Change (IPCC) Assessment Reports—when creating the new policy.

The new policy will be enforced through employees reading or watching the content as well as through “automated tools,” although the company did not state specifically what these are.

Google had previously in late 2019 announced its support for the Paris Agreement and touted multiple ways it was taking to support renewable energy markets and ensuring sustainability in its products.

This week, the big tech giant rolled out several products aimed at increasing climate awareness, including a routing model in Google Maps that shows users the most eco-friendly route to their destination.

Last month, Facebook announced several new measures to expand community engagement with “climate topics” and said it was seeking to make sure people “have access to reliable information while reducing misinformation.” It added that it was going to invest $1 million in a new climate grant program to fact check any climate content it deems “misinformation.”