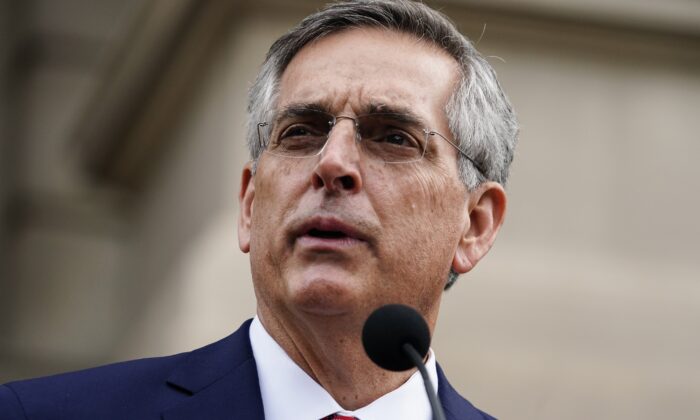 Georgia Secretary of State Brad Raffensperger on Wednesday joined other Republicans in calling to end the state’s current practice of allowing all voters to submit absentee ballots without giving a reason why they cannot vote in person.

He said that the system, referred to as “no-excuse” absentee voting, “opens the door to potential illegal voting, especially in light of the federal rules that deny us the ability to keep voter lists, registration files, clean.”

Raffensperger’s remarks were made at a hearing before the state Houses’s Governmental Affairs Committee and comes as his office continues to dismiss claims that there was any widespread fraud or irregularities in the November election.

“The no-excuse system voted into law in 2005—long before most of you, if not all of you, long before I was in the General Assembly—it makes no sense when we have three weeks of in-person early voting available,” Raffensperger said, adding later that allowing everyone to vote by mail brings logistical challenges.

His office also released a statement on the same day, saying, “Asking county elections officials to hold no excuse absentee ballot voting in addition to three weeks of early, in-person voting, and election day voting is too much to manage.

The 2005 Georgia law that allows for no-excuse absentee voting had been used by only between 5 to 7 percent of voters for years. But the number grew significantly because of the CCP virus pandemic and has strained the state’s resources, he noted.

Raffensperger at the hearing called to require voter ID for absentee ballots, as opposed to continuing with the current system of signature-matching, which is more subjective and potentially more prone to fraud.

The secretary of state’s general counsel, Ryan Germany, explained when asked why Raffensperger wanted to end no-excuse absentee voting that “it’s harder to provide confidence in that process,” according to Fox News.

At the same hearing, Raffensperger dismissed allegations of voter fraud in the state in the November election, saying that the “vast majority of claims … are simply unfounded.”

An election in Georgia scheduled for Jan. 5 will determine which party controls the U.S. Senate. Sens. Kelly Loeffler (R-Ga.) and David Perdue (R-Ga.) are facing Democrat challengers Raphael Warnock and Jon Ossoff, respectively, in a pair of runoff races.

More than 1.3 million absentee ballots have been requested in the state for these races, and about 1.2 million people have voted early in person.

Georgia has seen two recounts and its officials have twice affirmed Democratic nominee Joe Biden’s victory. However, the two recounts were without signature verifications, which were one of the main points of contention from the Trump campaign.

Raffensperger on Dec. 17 announced a statewide check of signatures on mail-in ballots in all 159 counties to “help instill confidence” in Georgia’s mail-in ballot system in future elections but asserted that the audit “will not change the outcome of the November election.” Kemp has said that results of the signature verification audit should be released by Wednesday or Thursday.