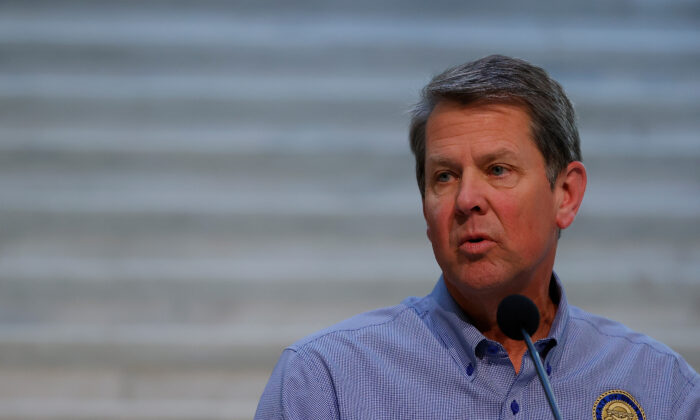 Georgia Governor Brian Kemp speaks to the media during a press conference at the Georgia State Capitol in Atlanta on April 27, 2020. (Kevin C. Cox/Getty Images
AMERICA

Georgia Gov. Brian Kemp on July 15 overrode more than a dozen local orders requiring masks to be worn in public.

In a new executive order, the Republican said that any laws, orders, rules, or regulations requiring people to wear face coverings of masks in public “are suspended.”

Georgia residents are “strongly encouraged,” but not required, to wear face coverings while outside their homes, the order states.

A number of counties and cities in the state had required people to wear masks.

Candice Broce, a spokeswoman for Kemp, highlighted the part of the new order that states no local laws can be more or less restrictive than state mandates.

“We have explained that local mask mandates are unenforceable. The Governor continues to strongly encourage Georgians to wear masks in public,” she said in a statement.

“It is officially official. Governor Kemp does not give a damn about us,” Savannah Mayor Van Johnson, a Democrat who issued an order requiring masks in public, wrote on Twitter on July 15.

“Every man and woman for himself/herself. Ignore the science and survive the best you can.”

“Quite a time thumbing through the thesaurus to describe this malignant Governor and his abominable actions,” he wrote on Twitter. Kemp has encouraged state residents to wear masks and regularly dons one while in public.

Atlanta Mayor Keisha Lance Bottoms, a Democrat, ordered residents last week to wear masks in public. She wrote at the time that Kemp’s June executive order didn’t contain a requirement or prohibition concerning the use of masks or face coverings, meaning her order didn’t conflict with his mandate.

Exemptions were outlined for people eating and drinking, driving, swimming, and other activities. Children under 10 were also exempt.

Like most mask orders, Bottoms’s didn’t contain details about how the requirements would be enforced. Some areas have threatened fines if people don’t comply.

In a statement after the Atlanta order, Kemp’s office called all local mandates “unenforceable.”

“We continue to encourage Georgians to do the right thing and wear a mask voluntarily. If the Mayor wants to flatten the curve in Atlanta, she should start enforcing the current provisions of the Governor’s orders,” the statement read.

The governor said in June that a statewide order would be a “bridge too far.”

“There’s some people that just do not want to wear a mask. I’m sensitive to that from a political environment of having people buy into that and creating other issues out there,” he said. “But it’s definitely a good idea.”