Form a NATO for Trade to Counter the Communist Chinese Regime: Report 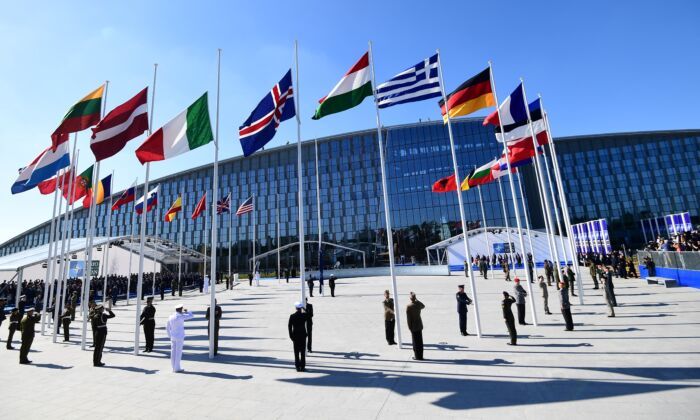 Officials and military personnel at the NATO headquarters, in Brussels, on May 25, 2017. (Emmanuel Dunand/AFP via Getty Images)
By Dorothy Li

A democratic alliance organization could contain the economic coercion backed by communist China’s state power, like a NATO for trade, says a think-tank report.

The Chinese regime is pursuing global dominance, especially in advanced technologies and industries, but the system, ruled by the Chinese Communist Party (CCP), is at fundamental odds with the principles of market-based trade, according to a report issued on June 28.

“The Communist party regularly weaponizes its vast array of policy tools to punish any nation that doesn’t kowtow to Beijing,” Robert Atkinson, president of the Information Technology & Innovation Foundation wrote in the report.

“No nation wants to individually bear the brunt of the Chinese attack, so most usually quietly capitulate.”

Atkinson proposed to form a Democracies’ Alliance Treaty Organization (DATO) as a deterrent, which democratic alliances agree to give tit for tat together if a member is targeted by the communist regime, like the NATO for trade. It welcomed any democracy to join, but one would lose the membership once it failed to make the joint efforts.

The North Atlantic Treaty Organization (NATO) is a political and military alliance between European and North American countries. At the heart of the treaty, an attack on one member is considered as to all. Founded in 1949, it was a bulwark against the communist threat of the Soviet Union.

Atkinson noted the hostages held by the CCP to intimidate the west range from Chinese students, tourists, export and import products, like key minerals, to foreign commercial firms embedded in the Chinese market.

But the WTO’s one-nation, one-vote system makes it hard to act as an arbiter of global trade, against a global player’s coercive practices.

Beijing has imposed an embargo on trade with a dozen export products, including wine, beef, timber, lobster, and coal after Australia called for an independent investigation into the origin of COVID-19 and condemned human rights violations in the far-western province Xinjiang and Hong Kong.

Taiwanese economist Wu Jialong said it was not enough that western countries, like Canberra, sought to use economic approaches encountering the coercion.

“It has to be viewed as a political action. And [democracies] have to respond accordingly,” Wu said in the interview with The Epoch Times.

Wu claimed that the economy and politics are interwound, but many countries failed to recognize this point.

The economist stated that the Chinese regime aligned its economy with politics, and the economic behaviors are to deepen its influence in politics. He added that contrary to the capitalist system that private property is protected by state power, communism eliminates private ownership.

Now, it seems that westerners have realized that using competition or negotiations to curb the CCP’s rule-breaking actions was “in vain,” Wu said Wednesday. The alliance “has to give tit for tat” jointly. Otherwise, Beijing skews at those signed agreements, even democratic countries.

The initiative is also praised by Hu Ping, a U.S.-based China expert and political commentator. He suggested that the regime adopted the tactic of “divide and rule,” luring each ally with economic benefits or investment to silence them one by one, if they could not stand together.

“The step is necessary, even just for solving the problems in trade,” Hu said in the interview with The Epoch Times on June 30.

The report, “NATO for trade,” is commissioned by The China Research Group, set up by UK conservative politicians, and a U.S. public policy think tank, Information Technology, and Innovation Foundation (ITIF).

The report claimed that free traders have to pay attention to the Chinese regime’s state capitalism. Otherwise, their companies or even their long-standing norms would be affected.

The “innovation mercantilist” has been successfully applied in solar panels, Internet applications, and high-speed rail, according to the report.

“China is seeking not only self-sufficiency but global dominance in virtually all advanced industries and technologies. Their success would have disastrous consequences on allied military advantage,” said Atkinson in the report.

He said any hope that the communist regime might change to become a fair trader by itself, or through pressure, is fading as it announced the goal of being “a world powerhouse” of scientific and technological innovation by 2050.

In the summit in June, NATO leaders warned of the military threat posed by the Chinese regime, calling Beijing a “system challenge.” But it also mentioned that it did not want a Cold War with China.