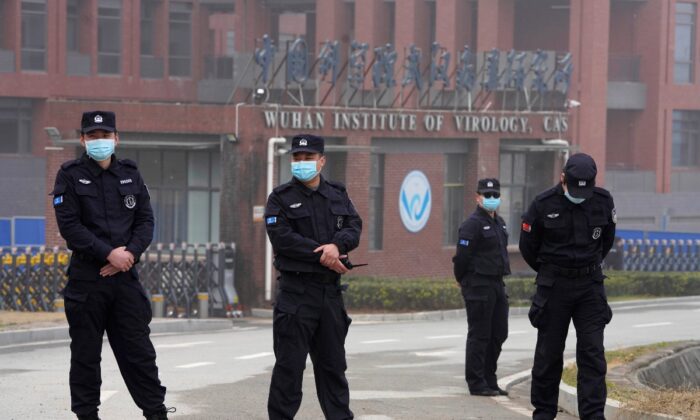 Security personnel gather near the entrance of the Wuhan Institute of Virology during a visit by the World Health Organization team in Wuhan in China's Hubei province, China, on Feb. 3, 2021. (Ng Han Guan/AP Photo)
By Eva Fu

Official Chinese state-approved footage from four years ago showing bats being kept at the Wuhan Institute of Virology (WIV) has further fueled scrutiny of the research conducted at the secretive facility.

A 2017 promotional video featured on the website of the Chinese Academy of Sciences (CAS), a top Chinese state-run research institute that administers the WIV, showed live bats held in cages inside the lab. In it, a researcher wearing blue surgical gloves was holding a bat and feeding it a worm.

The video, made after the research institute obtained the nation’s first P4 designation—the highest bio-security classification—in spring 2017, also showed bats in a cage inside the lab. It stated that WIV researchers had collected more than 15,000 bat samples from various parts of China and Africa.

While some overseas Chinese-language media had cited the video last year in reports that raised concerns about the lab, it has attracted more attention of late, as the possibility that the virus may have escaped from a Chinese laboratory has gained traction.

The WIV has filed at least two patents related to bat breeding. The first, filed in June 2018 and granted about half a year later, describes a bat-rearing cage with a glass front door, hanger, feed opening, and water drinking tube, designed to enable bats’ “healthy growth and breeding under artificial condition[s].”

The second patent, filed last October, instructs researchers on how to raise wild bats to improve their breeding and their survival rate.

A description of the WIV on a CAS-affiliated webpage said that the institute has three “barrier facilities” that enclose lab animals—totaling nearly 13,100 square feet—in which there are 12 bat cages.

The evidence of live bats being raised at WIV contradicted statements made by U.S. zoologist Peter Daszak, one of the World Health Organization (WHO)-led experts who went to the city of Wuhan to study the origins of the virus earlier this year.

Daszak, in a Twitter post made last December that he has since deleted, took issue with an article from The Independent that stated that “samples from the bats were sent to the Wuhan laboratory for genetic analyses of the viruses collected in the field.”

“Important error in this piece. No BATS were ‘sent to Wuhan lab for genetic analyses of viruses collected in the field,’” he wrote.

“That’s not how this science works. We collect bat samples, send them to the lab. We RELEASE bats where we catch them!”

Daszak further stated that the article “describes work I’m the lead on & labs I’ve collaborated [with] for 15 yrs.”

“They DO NOT have live or dead bats in them. There is no evidence anywhere that this happened. It’s an error that I hope will be corrected,” he said.

Daszak admitted on June 1—a week after leaked intelligence noted that three WIV researchers were hospitalized a month before China’s reported COVID-19 “patient zero”—that questions of whether the WIV had bats were never raised during the WHO investigation.

“I wouldn’t be surprised if, like many other virology labs, they were trying to set up a bat colony,” he said, seeming to contradict his statement on Twitter.

A scene from the same video of a bat dangling off the hat of a researcher, who wore only a pair of glasses and a regular surgical mask while collecting bat samples in the wild, has raised further questions about the security measures at the lab.

Screenshots from a 2017 report on state-run broadcaster CCTV have also shown a WIV researcher’s arm blistering from a bat bite during their study of the SARS (severe acute respiratory syndrome) virus.

The bats “could bite your hands through the glove,” WIV researcher Cui Jie told CCTV. He described the feeling as similar to “being jabbed by a needle.” In other footage, marked with the date Dec. 28 with no year attributed, another WIV researcher was holding a bat outdoors with both hands exposed.

In 2018, U.S. officials who visited the research facility sent cables back to Washington warning about weak safety standards at the lab.

Two U.S. Embassy officials said the lab had a “serious shortage of appropriately trained technicians and investigators needed to safely operate this high-containment laboratory,” according to the cable, as reported by The Washington Post.

The Wuhan lab began as a collaborative project between China and France in 2004 to study emerging infectious diseases following the SARS outbreak, which spread from China to more than two dozen countries.

The construction of the P4 lab was finalized in 2015. In 2017, former French Prime Minister Bernard Cazeneuve made the lab his first stop in Wuhan and attended the ribbon-cutting ceremony. The plan at the time was to have 50 French researchers go to the lab over the next five years, but that never occurred.

The French scientists were quickly sidelined. The Franco-Chinese Committee on Emerging Infectious Diseases, a group created for cooperation between the two sides, stopped holding meetings in 2016, according to France Bleu, part of the national public broadcasting group Radio France.

The 2017 Wuhan lab video briefly mentioned the Sino–French collaboration, noting that the two sides had “more than a decade of intense clashes due to differences in cultural backgrounds and ideology.” It noted that the P4 lab “will definitely contribute to the physical health of the public and the world peace” and serve as a “large scale world-class technology sharing hub.”

The WIV’s raw data remains closed off to the WHO and other international experts. In September 2019, the facility made its main database of samples and viral sequences offline. The data bank was Asia’s largest as of 2018, according to a news release on the WIV website.

Shi Zhengli, the director of the WIV’s research center for emerging infectious diseases who is now at the center of the virus controversy, maintained that the institute has been open to outside probes. Speaking recently with The New York Times, she called accusations of the lab withholding data “speculation rooted in utter distrust.”

A January fact sheet from the State Department under the Trump administration stated that WIV researchers had begun conducting experiments involving RaTG13, identified to have the closest genetic similarity to the COVID-19 virus, from as early as 2016.

Besides engaging in “’gain of function’ research to engineer chimeric viruses,” the WIV has engaged in laboratory animal experiments on behalf of the Chinese military since at least 2017, according to the fact sheet. Gain-of-function research involves creating artificial viruses by adding new or enhanced capabilities for the purpose of studying what new pathogens could emerge and how to guard against them.