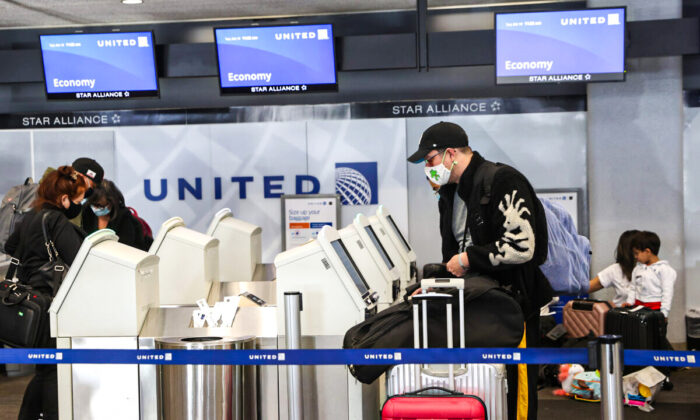 Travelers are seen at the San Francisco International Airport in San Francisco, Calif., in a file photograph. (Justin Sullivan/Getty Images)
US News

First Case of Omicron Virus Variant Detected in US: Officials

The first U.S. case of the Omicron variant of the CCP (Chinese Communist Party) virus has been detected in California, officials said on Nov. 30.

Genomic sequencing conducted at the University of California–San Francisco and reviewed by scientists with the Centers for Disease Control and Prevention confirmed that the case was caused by the new COVID-19 variant.

The patient traveled from South Africa on Nov. 22, began experiencing symptoms on Nov. 25, and tested positive for COVID-19 on Nov. 29. The person, a San Francisco resident who hasn’t been publicly identified, is self-isolating.

All of the patient’s close contacts have been contacted and, thus far, all have tested negative for COVID-19, a disease caused by the CCP virus.

“We knew that it was just a matter of time before the first case of Omicron would be detected in the United States,” Dr. Anthony Fauci, the longtime director of the National Institute of Allergy and Infectious Diseases, told reporters in Washington.

The patient is fully vaccinated. He or she is experiencing mild symptoms that are improving, according to officials.

“Some people might say, ‘Is that of concern, does that mean the vaccines aren’t working?’ We have been talking for months about the fact that vaccinations do one really, really important thing: protect against severe disease, against hospitalization and death,” Dr. Mark Ghaly, California’s health secretary, told reporters at a vaccine clinic in Fresno, California.

Ghaly noted that the symptoms not being more severe is “a testimony to the importance of the vaccinations.”

The protection given by COVID-19 vaccines against infection drops sharply over time, studies show. Their protection against severe disease largely holds up, though some slippage in efficacy over time has been seen, driving recommendations for all adults to get a vaccine booster shot.

No additional potential or confirmed cases of Omicron have been identified in the United States at this time.

The variant was first detected in South Africa in November, though Nigerian scientists have found a sample dating back to October. The United States restricted travel from South Africa and seven other African countries on Nov. 29 under an order from President Joe Biden. Travelers from other countries entering the United States will soon face stricter rules.

Officials throughout the world have imposed similar measures, citing the emergence of the Omicron variant in Africa.

Experts aren’t sure whether Omicron is more transmissible or whether it causes more severe disease. They’ve also expressed uncertainty on whether the variant evades immunity, including the protection given by vaccines, better than other strains.

But Omicron has been labeled a variant of concern by the World Health Organization and the U.S. government over fears that it may spread more easily than other variants and cause more breakthrough infections, or cases among vaccinated individuals.

As scientists race to learn more about the variant, they’re advising people to go back to social distancing and wearing masks, especially if they lack immunity from vaccination or prior infection.