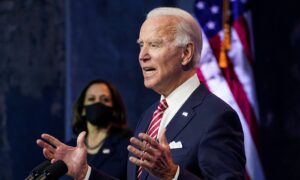 Almost 10 Percent of Biden Voters in Key States Wouldn't Have Voted for Him Had They Known About Hunter Biden Dealings: Survey
0
Share Now
FacebookTweetParlerEmail
Copy Link 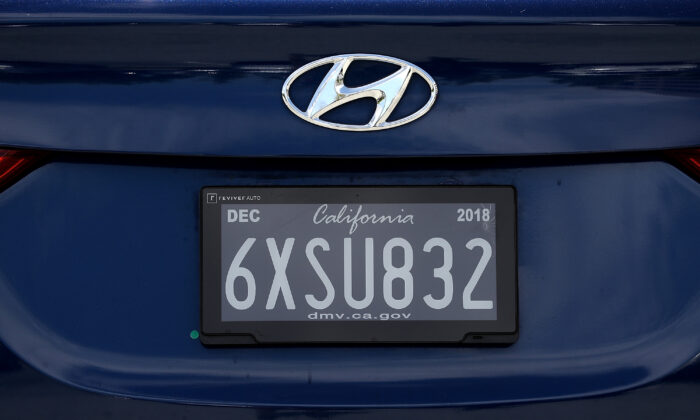 A digital license plate is displayed in Foster City, Calif. on May 30, 2018. (Justin Sullivan/Getty Images)
Judiciary

A federal judge ruled that the California Department of Motor Vehicles’ ban on personalized license plates it deems contrary “to good taste and decency” violates the free speech protections of the First Amendment to the U.S. Constitution.

“This is a great day for our clients and the 250,000 Californians that seek to express their messages on personalized license plates each year,” said Wen Fa, an attorney with the Pacific Legal Foundation (PLF), a public-interest law firm based in Sacramento that represents the plaintiffs.

Fa told The Epoch Times in an interview that the decision could also open the door to more constitutional challenges of policies that restrict free speech.

“I think this decision also paves the way for additional free speech challenges outside the license plate context,” he said.

“You have more and more laws banning offensive speech on college campuses, for example. Once you have a ban on offensive speech, you would have to have government officials determining what is and isn’t offensive and that determination necessarily leads to stifling of unpopular viewpoints and to bureaucrats injecting their subjective preferences into the law.”

California law allows drivers to opt for a personalized plate with customized alphanumeric combinations. The extra fees charged for the service are directed in part to “the preservation and protection of California’s environment,” according to court documents. In 2019, the DMV processed 233,791 personalized license plate applications, which generated north of $77 million in revenue in the 2018-2019 fiscal year.

The regulations implementing the law instruct the DMV to “refuse any configuration that may carry connotations offensive to good taste and decency, or which would be misleading.” Plates are to be rejected if they carry a sexual connotation or contain a term of lust or depravity, vulgarity, contempt, prejudice, hostility, or a racially or ethnically degrading term. Also to be turned down are plates that contain “a swear word or term considered profane, obscene, or repulsive.”

Of the 250,000 applications for personalized plates filed with the Golden State each year, 30,000 are rejected, Fa explained.

The DMV bans the word “hate,” as well as “gun,” on plates because it holds that weapons are offensive, the attorney said.

“Personalized license plates are a forum for expression that 250,000 Californians attempt to use every year … it’s important to hold the department to free speech principles so it can’t discriminate on the basis of viewpoint and it can’t make arbitrary decisions.”

Military veteran Chris Ogilvie was one of the plaintiffs in the lawsuit.

Ogilvie applied for a personalized license plate for his vehicle, also known as a vanity plate, reading “OGWOOLF,” a reference to his nickname in the service. California’s DMV turned down his application on the grounds that “OG” means “original gangster,” which the DMV determined was offensive.

Four other plaintiffs in the lawsuit successfully fought the rejection of their personalized plates.

Paul Crawford, an English immigrant and owner of Shakespeare Pub in San Diego, applied for the “BO11LUX” license plate. The pub’s slogan is, “Real beer, proper food, no bollocks.” The DMV rejected the application, claiming the British slang term “bollocks” had sexual connotations, even though it also means “nonsense.”

A longtime fan of the rock band Slayer, James Blair applied for the “SLAAYRR” license plate, but the application was turned down because it was deemed “threatening, aggressive, or hostile.”

To reclaim the word “queer” for the gay community, musician Amrit Kohli established Queer Folks Records. He hoped to acquire the “QUEER” license plate but was rejected because it was considered insulting, degrading, or expressive of contempt. It’s apparently not considered insulting in academia: “Queer Studies” programs are offered at California State University at Northridge, Oregon State University, Antioch University, and other institutions of higher learning.

Ducati motorcycle owner Andrea Campanile applied for the “DUK N A” license plate, short for “Ducati and Andrea,” but it was rejected because it was one letter separated from a phrase deemed obscene.

The DMV may be able to cure the constitutional defect by revising its policy, Fa said.

“It’s possible the DMV can come back and enact a more narrowly crafted regulation” in order to pass constitutional muster, “but it has no business being the free speech police,” the lawyer told The Epoch Times.

The California DMV hasn’t yet decided if it will appeal the court ruling.

The agency told The Epoch Times via email that it “is currently reviewing the court’s decision.”