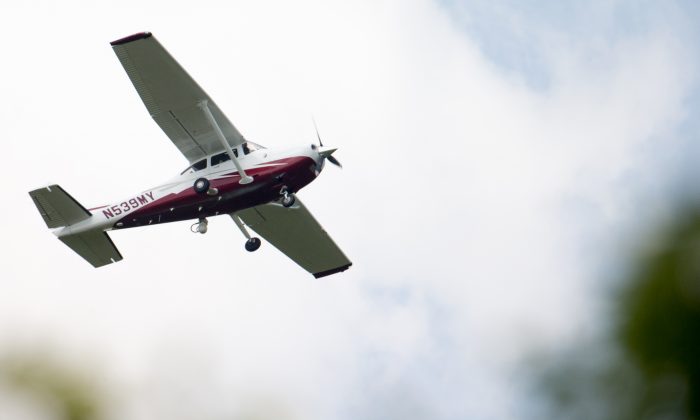 A small plane flies near Manassas Regional Airport in Manassas, Va. The plane is among a fleet of surveillance aircraft by the FBI, which are primarily used to target suspects under federal investigation. Such planes are capable of taking video of the ground, and some—in rare occasions—can sweep up certain identifying cellphone data. (AP Photo/Andrew Harnik)
By Ken Silva

The FBI’s so-called secret spy plane surveillance program is under scrutiny in a Florida terrorism case, where the defendant has asked a federal judge to toss evidence from the bureau’s aerial surveillance activities.

The FBI’s aerial surveillance program was first revealed in June 2015 by The Associated Press, which reported that the bureau maintained a civilian air force through private shell companies. The FBI admitted to the program days later.

“It should come as no surprise that the FBI uses planes to follow terrorists, spies, and serious criminals,” the FBI said in a statement at the time. “Contrary to some recent media reporting, the FBI’s aviation program is not classified. Some of our aircraft are registered covertly because overt registration would put our aircraft and operations at risk of compromise.”

Nevertheless, the existence of the FBI’s program sparked outrage among civil libertarians, who celebrated when the U.S. Court of Appeals for the 4th Circuit ruled in June that a similar program operated by the Baltimore Police Department violated the Fourth Amendment.

In August, accused terrorist Muhammed Momtaz Al-Azhari asked U.S. District Judge Anthony Porcelli to review the FBI’s program. According to prosecutors, Al-Azhari planned and attempted to carry out an attack on behalf of ISIS before his arrest in May 2020.

Al-Azhari’s motion accuses the FBI of running a “secret spy plane surveillance program,” as described by the AP and other reports, before providing details about how the bureau’s air force was used to monitor him.

Al-Azhari said the FBI’s planes would circle his Tampa home “often for hours on end.”

“The planes followed Mr. Alazhari as he went about his life, for example, watching him pick up his mail from his mailbox, watching him drive to visit his sister at her apartment, watching him visit an Urgent Care facility, and watching him check himself in for inpatient mental health treatment,” the motion reads.

“The planes generally flew at about 10,000 feet, sometimes above cloud cover. Small, quiet, and high in the sky, the planes were barely noticeable to those on the ground. The FBI sometimes used multiple planes on the same day, with a new plane picking up the surveillance another had left off.”

According to Al-Azhari, the FBI captured 428 hours of footage of him and created 935 separate videos with the planes—violating the Fourth Amendment in the process.

“This court should suppress the aerial footage and any evidence derived from the aerial surveillance because the surveillance was an unreasonable search under the Fourth Amendment,” the motion reads.

The Department of Justice (DOJ) responded to the motion on Sept. 29, accusing the defense of mischaracterizing the FBI’s aerial surveillance activities. Prosecutors said the aerial surveillance performed in this case wasn’t a search under the Fourth Amendment and that even if it were a search, it would still be legal.

“The surveillance conducted in this case is not novel, nor did it involve highly invasive or extensive monitoring that would raise constitutional concerns,” prosecutors said.

Prosecutors stated: “The last point merits further discussion. At the time aerial surveillance ramped up, the FBI had every reason to believe that the Defendant was planning an imminent attack.”

They also noted that the FBI was “leaving nothing to chance.”

“In short, the aerial surveillance at issue functioned as an extra set of eyes: another member of the investigative team that supported—not supplanted—the on-the-ground effort,” the DOJ stated.

A hearing has yet to be scheduled for the parties to argue Al-Azhari’s motion to suppress. Additional motions have been filed in the meantime, including a request for a mental health exam, as the defense is also arguing that Al-Azhari could be mentally unfit for trial.

Porcelli granted the defense’s request for a mental exam on Dec. 7, finding “reasonable cause to believe that the defendant may be presently suffering from a mental disease or defect rendering him incompetent to proceed in this matter.”

A status conference is set for Jan. 18.