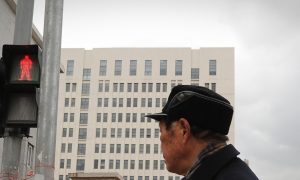 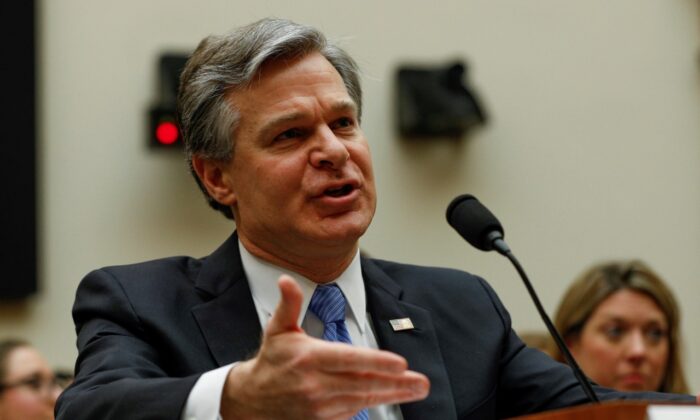 FBI Director: One New China-Related Investigation Is Opened Every 10 Hours

The Federal Bureau of Investigation (FBI) is opening a new China-related counterintelligence case about once every 10 hours as it pushes back against Beijing’s expansive campaign to steal American intellectual property (IP) and influence policymakers, FBI director Christopher Wray said in a speech on July 7.

Wray warned that Beijing’s counterintelligence and economic espionage operations are the “greatest long-term threat” to the United States’ economic and national security.

Its stealing of U.S. technology and trade secrets is on a scale “so massive that it represents one of the largest transfers of wealth in human history,” he said in a speech given at the Washington-based think tank Hudson Institute.

His remarks come as the Trump administration ramps up its actions and rhetoric against the Chinese regime in a range of issues from its coverup of the CCP virus outbreak to its tightening grip on Hong Kong to national security risks posed by Chinese telecom companies.

In one of the most detailed speeches by a U.S. official on the threats posed by the Chinese Communist Party (CCP), the FBI director detailed the regime’s “broad, diverse campaign” to steal American IP and exert undue influence over U.S. officials at all levels of government.

“China is engaged in a whole-of state-effort to become the world’s only superpower by any means necessary,” Wray said.

“It can execute that campaign with authoritarian efficiency,” he added. “They’re calculating, they’re persistent, they’re patient, and they’re not subject to the righteous constraints of an open democratic society, or the rule of law.”

The campaign employs a wide range of techniques—from cyber hacking to acquisitions of foreign companies to physical theft—and involves a full breadth of actors, spanning intelligence services, private firms, graduate students, and researchers, the FBI director said. The targeted U.S. companies range from Fortune 100 companies to startups, in a variety of industries from aviation to agriculture.

U.S. pharmaceutical companies and research institutes have especially been targeted during the pandemic, Wray noted. He said “it’s not unusual” for the FBI to see cyber intrusions tracing back to China after a company or research body makes an announcement about promising COVID-19 research—”sometimes almost the next day.”

Wray said that almost half of the FBI’s nearly 5,000 counterintelligence investigations across the country are connected to China, adding that in the past decade, there has been roughly a 1,300 percent increase in economic espionage cases linked to the regime.

In recent months, federal authorities have cracked down on academics who have allegedly hidden their links to Chinese state-backed recruitment programs, such as the Thousand Talents Plan—a policy that Wray said facilitates the transfer of sensitive American technology and know-how to China.

The former chair of Harvard University’s chemistry department, Charles Leiber, was indicted in June on charges of making false statements about funding he received from China. Prosecutors allege Lieber lied about years of participation in the Thousand Talents Plan while working on sensitive U.S. research.

In May alone, a Chinese-born former researcher at the Cleveland Clinic was charged for lying about funding from China, including the Thousand Talents Plan, and a Malaysian-born professor at the University of Arkansas was also charged for failing to disclose ties to China while receiving funding from NASA. In addition, a Chinese-born former professor at Emory University was convicted for failing to report payments totaling at least $500,000 that he received from the Thousand Talents Plan.

The regime’s efforts to steal personal data has also impacted ordinary Americans, Wray said. For instance, in February, four members of the Chinese military were indicted for hacking U.S. credit-reporting agency Equifax. The hack—one of the largest on record—exposed the sensitive personal information of 145 million Americans, more than 40 percent of the U.S. population. The director said that cyberattacks targeting personal information go into feeding the regime’s development of artificial intelligence tools and intelligence operations.

Wray said the CCP is also engaged in a “highly sophisticated” campaign to influence U.S. officials at each level of government, persuading them to take policy positions in line with those of the regime, such as on Taiwan, Hong Kong, and Beijing’s handling of the pandemic.

Its methods, he noted, include Chinese diplomats applying direct pressure, such as economic threats, as well as indirect and covert means, including blackmail and using middlemen to convince targets.

Earlier this year, a Chinese consulate official tried to convince a Wisconsin state senator to introduce a resolution applauding the regime’s efforts to contain the pandemic. The approach backfired after the senator, angered by the influence attempt, introduced a resolution condemning the CCP’s coverup of the outbreak and Beijing’s disinformation campaign instead.

The director warned that when direct influence efforts don’t work, the regime will then try to co-opt people close to the official, such as a political donor or business person, to exert pressure on the targeted policymaker.

“The co-opted middlemen may then whisper in the official’s ear and try to sway the official’s travel plans or public positions on Chinese policy,” he added. “These intermediaries, of course, aren’t telling the American official that they’re Chinese Communist Party pawns—and worse still, some of these intermediaries may not even realize they’re being used as pawns, because they, too, have been deceived.”