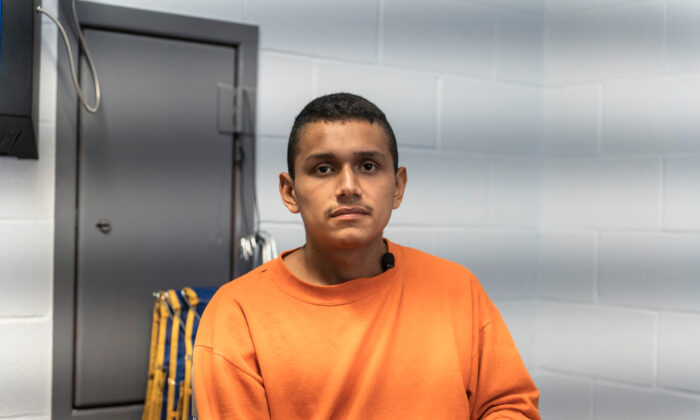 EXCLUSIVE: Inside the Human Smuggling Logistics of a Mexican Cartel

His final goal was Detroit, where he said an uncle had a job lined up for him.

Bieya’s trip was cut short in Goliad County, some 200 miles north of the border and 150 miles shy of Houston, after the vehicle in which he was being smuggled crashed into a culvert as the driver attempted to flee local law enforcement.

He initially fled the scene, but was picked up by the sheriff that evening after walking to a road to look for water and food.

The Epoch Times spoke with 17-year-old Bieya through a translator on June 23 as he sat in the Goliad jail.

Bieya said he’s from Veracruz in eastern Mexico, where his family owns a small ranch, but he “can’t make enough money there.”

He says that in late May, he made the decision to come to the United States and called his uncle in Detroit.

“He told me he would get me to the United States,” Bieya said.

A couple of weeks later, Bieya and his father took a bus to Reynosa, a major city separated from McAllen, Texas, by the Rio Grande, which marks the international border.

In central Reynosa, the duo waited at a restaurant. They provided to the uncle their GPS location and what they were wearing, and a taxi soon arrived to take them to a stash house.

At the house, Bieya’s father bid him goodbye and got back in the taxi to return to Veracruz.

Inside the house, which Bieya said was good-looking, “not a trashy house,” four other Mexicans waited to be smuggled across the border. These weren’t the illegal crossers who turn themselves into Border Patrol for asylum, but rather, the “gotaways”—the tens of thousands who evade capture every month because they’re unlikely to qualify for any type of legal entry.

A Mexican man in his mid-20s was running the house, Bieya said. He said that he didn’t have to pay anything for food, accommodation, or transport at any stage, but suspects that his uncle paid about $7,000 to have him smuggled to Detroit.

“He said he paid a lot of money, but he never told me how much he paid,” he said.

Bieya said he spent the night in the house, and around noon the next day, the five migrants were transported by car to “the end of a long road,” after which he estimates they walked about three miles to the bank of the Rio Grande.

There, they crossed the river in an inflatable raft and disembarked into the United States.

Two Mexican Americans appeared and escorted them further from the river.

“They knew what they were doing. They were just there to pick us up,” Bieya said. The group walked until nightfall, then stopped for a while before resuming at about 1 a.m. They arrived at a stash house in McAllen, Texas, in the early morning, he said.

Three other illegal immigrants were already at the stash house, bringing their group to eight.

Several hours later, the group was transported to a second stash house in McAllen, where they waited until evening before squeezing into a Ford pickup truck. By now, there were 14 people to transport, including two Honduran nationals and one female.

“There were seven of us” jammed into the truck bed under a sheet of plywood to hide them, he said. “It was tight.”

“After about an hour on the road, the truck stopped and they told us to get out.”

Bieya said he didn’t know where they were, but the timing fits with where smugglers drop off illegal immigrants so they can walk through the brush to skirt the Border Patrol highway checkpoint near Falfurrias, Texas.

It’s one of the deadliest paths for illegal immigrants, where many die from heat-related issues. Guides, or “coyotes,” leave sick or injured people to fend for themselves.

The original two coyotes were still with Bieya’s group, and at this point, a third was present to lead them in their ensuing seven-night trek.

“We walked from 4 in the afternoon until 5 in the morning,” Bieya said. At the time, the temperature in South Texas was hitting the high-90s to 100s during the day, while the night cooled to the mid-70s.

The group carried 1-gallon jugs for water, and when they ran dry, they’d find a livestock trough to refill. They ate only once a day.

“We all talked about what we would do if we made it safe into the United States,” he said. “I wanted to work for a couple of years and hopefully get citizenship.”

Helicopters with spotlights passed over several times, and they had to scurry into the brush to hide. He said he also saw drones three times during the trek. Two rattlesnakes met their demise during the trip.

After seven nights, Bieya said the group arrived at a paved road and waited for the pickup vehicle to arrive. Within an hour, a Chevy Tahoe SUV stopped, and they all crammed in. The next stop was supposed to be Houston, but in Goliad County, Sheriff Roy Boyd spotted them and attempted to pull the vehicle over.

The driver tried to escape, but lost control and crashed into a culvert. All of the occupants, including Bieya, fled into the brush. But he was the last one to exit the vehicle and never saw the main group again. He said members of the group had told him they planned to go to New York, Virginia, the Carolinas, and Houston.

“I didn’t know what to do because I was so hungry, so thirsty,” he said. Later that evening, he said he decided to turn himself in.

Bieya found some workers near a road and asked them for water.

“They gave me two bottles of water and a beef taco,” he said. Not long afterward, the sheriff was passing by, saw him on the side of the road, and apprehended him.

Eight other members of the group were later apprehended in a nearby county. They were turned over to Border Patrol and taken back to Mexico, but Boyd has issued warrants for their arrests, should they reappear. The warrants include felony charges for engaging in organized crime, as well as several misdemeanors, including evading arrest, Boyd said.

The Gulf Cartel coordinates all the logistics of the human smuggling from the eastern part of Mexico right through the Texas corridor and deep into the United States, said Boyd.

“Just think of the logistics that go into it,” Boyd said. Bieya was just one person in a system that handles thousands of illegal aliens per day.

Officials in El Paso, Texas, recently estimated there were 60,000 people across the border in Ciudad Juárez waiting to enter the United States illegally. Boyd said he’s heard estimates of a half-million waiting to cross along the 1,254-mile Mexico–Texas border.

“As you move those people, where you’re moving them to has to be vacated by the people who are already there,” he said.

“It’s almost like warfare, the logistics of feeding and transporting and housing and having water and the toiletries and all of the things that are required. It’s a phenomenal task just on the logistics side.”

He said working factories and warehouses in Mexico are common locations that cartels use to stash people until they’re ready to take them across the border.

Boyd said the cartels pay the Mexican government each month for the use of the “plazas,” which are the staging and border crossing areas. The government will allow a certain volume of drugs or amount of people to flow through per month, and if it exceeds that, the cartel is taxed, or the government will raid a warehouse and sit on the commodity until the cartel pays.

“It’s how they work with the drugs, so I suspect they work the exact same way with humans,” Boyd said.

“What these people don’t know at this point is that that payment to get across to Texas is not the final payment. The final payment gets told to them when they get to Houston,” he said.

Inside Texas, and beyond, the Gulf Cartel has an extensive network, with Atlanta being the next major hub beyond Houston.

“The cartel owns car dealerships, restaurants, various businesses, and it helps them launder their money, move their slaves, and maintain a foothold within the communities,” Boyd said. “That’s how it functions, and it’s very complex, but it ensures the cartel’s total control of their operational area within the United States.”

The smuggler drivers are now often recruited via social media such as TikTok, WhatsApp, and Facebook, Boyd said.

“They were targeting Hispanic teenagers from the metropolitan areas like Houston, San Antonio, and Dallas,” he said.

“They show wads of money. And so you have a teenager who sees somebody with $10,000, and they’re told, ‘You can drive down to Falfurrias, pick up eight people, drive up here, and you get this amount of money.’ It’s quick, easy money.”

Boyd said there’s a large Hispanic community in Houston, of which a portion “sympathizes with Mexico and works for the cartel—and so they’re the operatives that get hired to go back and forth.”

Boyd’s goal is to deter the cartel from entering Goliad County. Within the 852 square miles of the county, he monitors 16 cartel sites that are currently dormant, but tactics change quickly.

“All I can do is try to make it as uninviting as possible for them to come into Goliad. And that’s what we’ve been trying to do.”

“Warning! Drug and human traffickers: Turn around, do not enter Goliad County,” the signs read. “Go around. Or we will hunt you down and put you in Goliad County jail.”

Boyd had to stop putting up the signs after an attorney general opinion came back saying a county isn’t authorized to place signs without approval from the DOT.

“We have a whole list of rules, we have a Constitution, we have laws,” Boyd said.

“The cartel only has one: to make money. So it makes them very quickly adaptable to whatever situation they find themselves in. They’re constantly morphing.”

Boyd arranged a deal with Bieya that if he gave him as many details about his journey as possible, he’d recommend that U.S. Immigration and Customs Enforcement (ICE) allow him to stay in the United States. Boyd said Bieya will likely be released—with the 3,000 pesos (about $150) he brought—within the next two weeks, to his uncle in Detroit.

“Hopefully, it’ll save him from winding up in indentured servitude [to the cartel],” Boyd said.