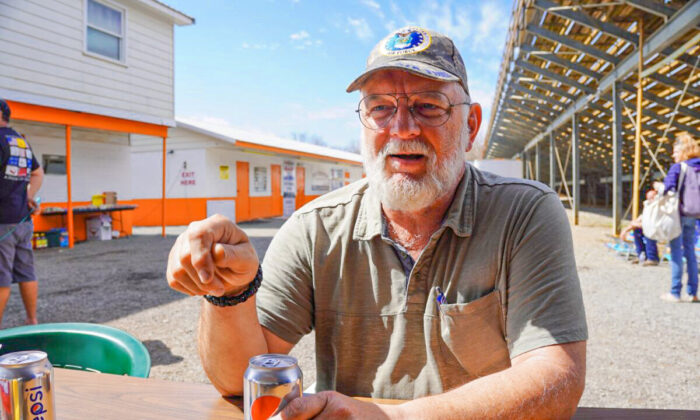 ‘Even If It’s Just One Truck, It’s Still the People’s Convoy’: Trucker Vows to Press On

Delivering the people's message to those in power
By Terri Wu

When Ron Coleman arrived at Adelanto Stadium outside of Victorville, California, on Feb. 21, he was the second trucker to arrive for the People’s Convoy, which was scheduled to roll out two days later for a cross-country ride to the nation’s capital.

The objective was to deliver a message to Washington to end the national emergency in response to the COVID-19 pandemic and restore freedoms protected by the U.S. Constitution. The emergency declaration, which was declared in March 2020 under President Donald Trump, has since been extended twice by President Joe Biden, in February 2021 and this month.

By the next day, there were 12 trucks. And when he arrived at Hagerstown Speedway, an auto-racing track in western Maryland and the truckers’ base camp near the nation’s capital, his truck was one of nearly 1,000 vehicles.

The 61-year-old trucker has been in Hagerstown for more than two weeks now. He owns a trucking company called Grey Wolf Transportation LLC, and Coleman often goes by “grey wolf,” the handle he used on the CB (citizens band) radio communication system used mostly by truckers. His daughter, 42, who works at his company, calls him every day.

“Dad, you really can’t afford to do this,” his daughter sometimes tells him.

During the protest, Coleman hasn’t earned any income to pay the mortgage on his family home in Reno, Nevada, where his girlfriend, his daughter, and his 19-year-old grandson also live.

“I cannot afford not to,” Coleman replies. He stresses that he simply can’t stay on the sidelines.

“It’s extremely overwhelming,” he told The Epoch Times. “I’ll be honest with you, I lay down in my bunk at night—I cry for an hour.

“It’s so overwhelming thinking of all those people giving me those hugs and telling me their stories. I told them that I would be their Pony Express rider,” he said. “And I’ve told them I’m delivering their posts as one of the riders. Each truck is a horse, and all of us are riders. So this is what we are doing.”

The first powerful message Coleman received came from the Navajo Nation. When the convoy stopped for their second night in Lupton, Arizona, on the New Mexico border, Coleman saw bonfires across the street from where they parked. Older Native American women were cooking in 11-degree weather to welcome and feed the truckers.

The next morning, the vice president of the Navajo Nation, the largest tribe in North America, blessed the truckers and told them that the entire Nation was behind the movement.

While the experience had a huge effect on Coleman, it turned out to be just the beginning.

The convoy that arrived in Lupton had only about 30 to 40 trucks. But, after that point, “it just blossomed,” he said.

Although raised as Catholic, Coleman doesn’t consider himself a devoted Christian. But moments in the trip have rekindled a connection to the spiritual.

He recalled one incident in Big Cabin, Oklahoma, when the convoy group met a local group cooking steer meat for them at a rest area.

While waiting for the food, he kept hearing an eagle squawking and thought it was someone’s phone ringtone. Then when the woman cooking the burgers looked up to the sky, he followed her gaze and saw a bald eagle circling them.

“It’s a biblical reference. God will fly on eagle’s wings,” Coleman told The Epoch Times. “That’s a message. How can you make that kind of stuff up? You can’t. And this eagle appeared when we appeared.

“I was moved. It’s just been one after the other after that. It touches your heart,” he said as he choked up and paused for a bit.

“You can’t let the people down, because the number of people we came across was enormous.”

Coleman said that the truckers estimated that they had probably seen a million people massed on highway overpasses along their route.

Later, in Cuba, Missouri, he met a family with three children, with the oldest child looking to be about 4 years old. The mother asked him whether he was a trucker, and he said yes. When he reached out to shake her hand, she started sobbing. He pulled her into a bear hug and felt her whole body shaking. She told Coleman that she was afraid for her children’s future.

She said truckers were her heroes for what they were doing.

While assuring her that he would deliver her message to Washington, he saw her husband crying. Soon Coleman had both husband and wife in a bear hug.

“One thing came clear to me that very moment. What are those three children seeing? Do you think they ever saw their parents crying and hugging a stranger before? That’s a day they will remember the rest of their lives,” Coleman said.

He said that such experiences along the People’s Convoy journey were why he was angry at a reporter. During a press conference that Sens. Ron Johnson (R-Wis.) and Ted Cruz (R-Texas) hosted with truckers on March 8, a reporter commented that truckers were “encircling D.C. now quite feverishly, trying to occupy.”

“Until he [the reporter] can stand up and get in that truck with me, go out, see those same families, and tell me that he doesn’t sit there and draw a tear, he needs to shut his mouth,” Coleman told The Epoch Times.

Brian Brase, a convoy co-organizer, emphasized during the meeting with the senators that leaders in Washington, media, and corporations are “out of touch with who the American people are.”

“It’s time that a new renaissance period is ushered in, a renaissance of freedom,” he said.

‘Build It and They Will Come’

Coleman recalled that there were only four trucks and a few cars on Feb. 21, the day he arrived for the People’s Convoy. Some drivers weren’t sure about the turnout. But, he had faith, saying, “Build it and they [truckers] will come.”

The trucker said he initially had the idea of a nationwide trucker strike as early as 2021, which could run under the slogan: “If you bought it, we brought it.” Everything, he said, except for babies, comes on a truck.

When he saw Canada’s Freedom Convoy, he realized that paralyzing an entire city wouldn’t win hearts and minds.

“However, convoys win hearts and minds; they bring the people.”

He began to think about the strategy and the message.

“The message consistently was peaceful,” he said. He realized that the convoy needed to be an “education convoy.”

“I’m bringing people up to speed and letting them know that our Constitution is suspended because of the Emergency Powers Act,” he said.

In an interview with LiveFEED before he departed California, he said the mandates and lockdown were “detrimental” to his way of life on the road as a trucker. For example, many restaurants at truck stops were shut because of COVID, forcing him to stock up on groceries and other supplies and eat three- or four-day-old sandwiches stowed in a fridge in his truck while moving across the country.

What’s worse is that the situation has gone on for two years, when it was supposed to be temporary.

He said he isn’t afraid, knowing that he was getting into a similar movement as truckers in Canada and potentially facing a similar outcome: losing his truck or being arrested.

“I have the Constitution of the United States of America on my side. I have the Declaration of Independence on my side. So we will wake as many Americans up [as possible] on the way to D.C. and have them on our side. And we will bring them on to D.C. and let their voices be heard as well,” he said.

Coleman isn’t concerned about the number of trucks dwindling over time. There’s a static number, and there’s a floating number, including the trucks and cars that join on a short-term basis.

“Many people worry that this is going to fizzle, and it may fizzle to a point,” he told The Epoch Times. “But even with 20 trucks, we still can make a point.”

He likened the truck drivers to the head of a spear and the people to the spear’s shaft.

“You can’t have a spear that works without a sharp tip. And you can’t do any damage with just the tip. So it requires all of it, which is why I like the movement of the People’s Convoy,” he said.

“Because even if it’s just one truck, it’s still the People’s Convoy.”

“I hear people tell me that they are proud of what I’m doing because I’m standing up, and they can’t yet,” Coleman said.

“I like the word ‘yet.” But they can’t [right now]. And I get to stand strong and stay strong.”

At the Hagerstown Speedway, Coleman wrote on a “call to action” board that truckers and visitors should call their congressional representatives twice a day to urge them to push for ending the national emergency and remind them that primary elections are coming up soon.

On March 3, the Senate approved legislation to declare an end to the emergency, but the Democratic-controlled House of Representatives isn’t expected to take up the measures. The White House said on the same day that the bill would be vetoed if the House were to approve it.

Coleman’s objective is to push the House to approve the measure, even if Biden vetoes it.

“We’ve met our goal because we’ve just exposed a tyrant,” he said.

But, what if the legislation doesn’t pass the House?

Coleman said he would consider that a mission failure but not a personal failure, noting that his commitment was to deliver people’s messages to Washington.

“On a personal scale, I have a victory there. I’m not letting those people down—those I met with.”

Yet the stakes are high if they don’t succeed, he believes.

“If we fail at this objective, then I fear we will go into a second revolution. It may not be overnight. But it’s cued up, and people are so tired of all of this tyrannical decision-making, they’re ready to go.”

Coleman says he recently started a fundraising site, hoping for help to cover his mortgage.

“I’m in this to win. If I can supplement and pay my bills, I’m going to stay here until this is over.”