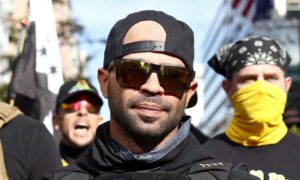 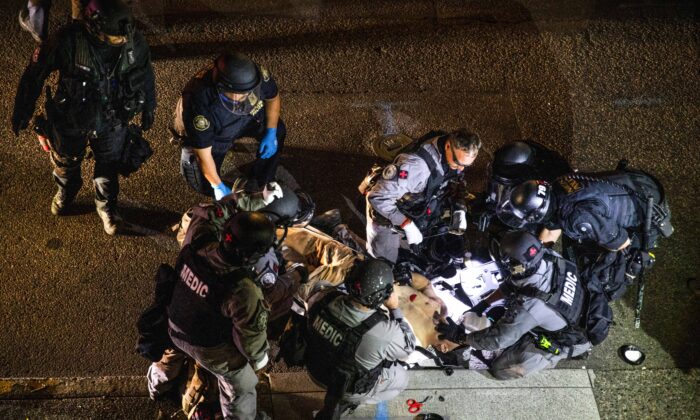 A man is treated after being shot in Portland, Ore., Aug. 29, 2020. The victim was later identified as Aaron Jay Danielson, who died from his wounds. Michael Reinoehl, an Antifa member, admitted to shooting Danielson. (Paula Bronstein/AP Photo)
US News

The estate of a man who was shot dead in Portland, Oregon, last year is suing the city over its approach to public safety.

Portland Mayor and Police Commissioner Ted Wheeler, Multnomah County District Attorney Mike Schmidt, and other city officials “created a vacuum where peacekeeping efforts and criminal accountability should be; in its place, an environment of vigilantism emerged that ultimately led to the death of Aaron Danielson,” states the lawsuit, which was filed in federal court in Portland and obtained by The Epoch Times.

Danielson was killed in Portland on Aug. 29, 2020. Michael Reinoehl, a self-described member of the far-left, anarcho-communist Antifa network, later admitted to shooting Danielson, who was wearing a hat bearing the logo of Patriot Prayer, a right-wing group, and has been described as a Patriot Prayer supporter.

The two groups clashed in Portland before the shooting, with little intervention by police officers.

The Portland Police Bureau, which is overseen by Wheeler, chose to allow rioters to attack a federal courthouse in the city during the spring of 2020, triggering a deployment of federal officers to protect the building and leading to nightly clashes that drew nationwide attention.

Rioters, including members of Antifa, later turned their attention on other facilities, such as police precincts and the headquarters of the Portland police union. While some arrests were made, many of those arrested saw their charges dropped or their cases not pursued by prosecutors, under an unusual policy implemented by Schmidt’s office shortly after he became the district attorney.

The lawsuit says the approach used by police and prosecutors also included delegating the authority to engage in crowd control and crime prevention to individuals who provided security services for Antifa, Black Lives Matter, and right-wing groups such as Patriot Prayer.

The defendants knew that a large-scale demonstration was planned the night that Danielson was killed and was aware that members of Antifa and others planned to confront demonstrators but chose to deploy a minimal police presence, while also ordering officers to “stay out of sight” and allow the demonstrators and protesters to “express their emotions,” the suit also alleges, quoting Wheeler.

Danielson was deprived of his constitutional rights to assemble peacefully and to have equal protection under the law, his estate’s lawyer said.

“This case is about accountability. We are seeking justice for the preventable death of a young man, gunned down in a city with a dangerous and deadly hands-off approach to public safety,” Christopher Cauble, the lawyer, told The Epoch Times in an email.

“Time and time again, city leadership and law enforcement has failed to find an effective response to clashing groups of protesters. For well over a year, they have known when and where these rallies would occur and the likelihood of escalating violence. Yet no strategy of protective intervention has been utilized to this day. This reckless dereliction of duty cost Aaron Danielson his life. We seek justice for the Danielson family and for a community that deserves far better safety and responsibility from those sworn to protect and serve.”

The suit is seeking $13 million in damages.

Reinoehl was shot dead by law enforcement officers carrying out an arrest warrant days after the Danielson killing. William Barr, the attorney general at the time, said what unfolded was “a significant accomplishment in the ongoing effort to restore law and order to Portland and other cities.”

Another shooting took place in a daylight clash in Portland on Sept. 4 after Chuck Lovell, Portland’s police chief, announced that officers wouldn’t intervene in physical clashes.

Wheeler, a Democrat, initially defended the strategy despite the shooting, but on Sept. 8 during a city council hearing, said the tactics needed to be rethought.

“It is clear, based on the public outcry, on the media outcry, on the national front, that that strategy was not the right strategy. I think we can all acknowledge that. I take full responsibility for it,” he said.

“I think we all acknowledge we want to do better. So for me, it’s about proper training, it’s about clear directives, it’s about making sure the community feels safe to express their First Amendment rights to freedom of speech and assembly, but also to hold anybody—and I mean anybody, regardless of their politics—hold anybody accountable who thinks violence or criminal destruction is the right answer.”