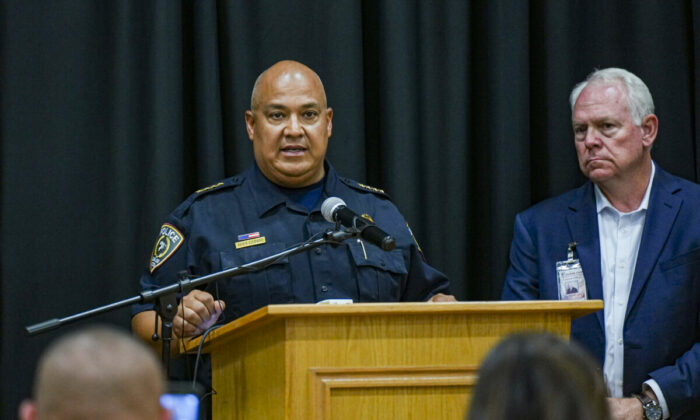 Update: Arredondo was sworn in on May 31.

The police chief of the school district in Texas where a mass shooting at an elementary school took place on May 24 can assume the City Council seat to which he was previously elected, according to the city’s mayor.

Uvalde Consolidated Independent School District Police Chief Pete Arrendondo was elected to the Uvalde City Council about two weeks before the shooting. He received 126 votes, or 69 percent of the total, in the election.

“There is nothing in the City Charter, Election Code, or Texas Constitution that prohibits him from taking the oath of office,” Uvalde Mayor Don McLaughlin said in a statement to news outlets on May 30. “To our knowledge, we are currently not aware of any investigation of Mr. Arredondo.”

However, Arredondo, who told a local paper after being elected that he was “very excited” to take on the new role, will have to wait.

The swearing-in ceremony was scheduled for Tuesday but is being postponed due to the first funerals of those who died in the attack on Robb Elementary School.

“Our focus on Tuesday is on our families who lost loved ones,” McLaughlin said. “We begin burying our children tomorrow, the innocent victims of last week’s murders at Robb Elementary School. The special City Council meeting will not take place as scheduled.”

McLaughlin did not say when the rescheduled ceremony would take place.

The law enforcement response to the shooting has become heavily scrutinized after it was revealed that officers, after entering the building, waited about 45 minutes to breach the classroom in which the shooter was killing students and teachers.

Arredondo, according to Texas Department of Public Safety Director Steven McCraw, was in charge of the response and chose not to have the officers immediately breach the classroom.

He said Arredondo, who has not spoken to reporters since the revelation, made the choice because he thought the situation was a barricaded suspect, not an active shooter one.

That wasn’t true, though. Multiple 911 calls made from the classroom as officers stood outside showed that children were still alive. At least one of the callers survived, McCraw said.

The U.S. Department of Justice announced over the weekend that it is probing the response.

“The goal of the review is to provide an independent account of law enforcement actions and responses that day, and to identify lessons learned and best practices to help first responders prepare for and respond to active shooter events,” Anthony Coley, a spokesman for the department, said in a statement.

The mayor said Monday that he cannot change Arredondo joining the City Council and that he does not want to intervene.

“I mean, he was duly elected, and that’s something Pete and, I’m sure, the people in his district will come to terms with,” McLaughlin said.