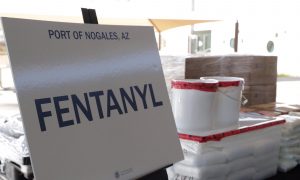 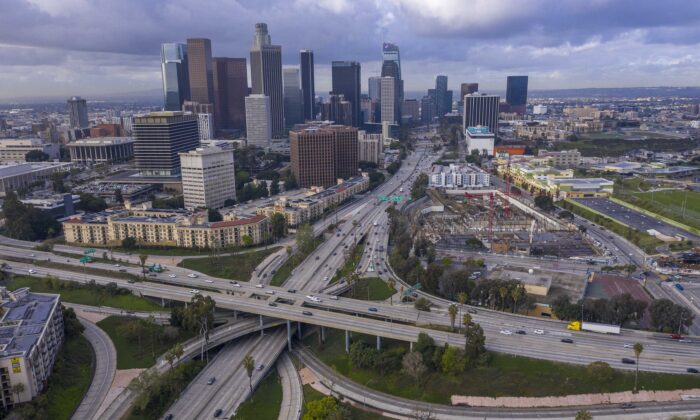 Freeway traffic flows lighter than usual on the 110 and 101 freeways before the new restrictions went into effect at midnight as the the coronavirus pandemic spread in Los Angeles on March 19, 2020. (David McNew/Getty Images)
US News

The CCP virus pandemic has worsened another existing epidemic—the opioid crisis—as the virus has worsened feelings of anxiety, social isolation, and depression while many recovery programs have been forced to close or scale back, health experts say.

“Evidence shows how economic downturn, specifically unemployment, can lead to issues like drug overdose deaths, as well as becoming a risk factor for suicide,” Dr. Benjamin F. Miller, the chief strategy officer of the Well Being Trust, a national foundation focused on improving mental health, told The Epoch Times in an email.

“Because of the challenges associated with social isolation and loneliness, this could be a multiplier—something that we have never seen as a country. The combination of social isolation and economic decline is likely to cause a substantial amount of distress for countless in our communities,” Miller said.

Suspected overdoses have jumped by 18 percent in the United States since March (pdf) after state-mandated stay-at-home orders were introduced and 62 percent of the participating counties experienced an increase in overdose submissions, according to statistics by the Overdose Detection Mapping Application Program (ODMAP), a surveillance system that provides near real-time suspected overdose data nationally.

“Detected overdose clusters have shifted from traditional centralized, urban locations to adjacent and surrounding suburban and rural areas; and the number of spike alerts and the duration of overdose spikes has increased nationally,” ODMAP states in its report, “COVID-19 Impact on US National Overdose Crisis.”

The Advocacy Resource Center of the American Medical Association (AMA) said in a July 8 update (pdf) that 35 states have reported an increase in opioid-related mortality.

Certain counties have borne more than the others. For example, Sarasota County in Florida has reported 29 opioid fatalities in the first six months compared to 13 for all of 2019, according to a statement by Rep. Vernon Buchanan (R-Fla.). He wants more funds for drug treatment in the next coronavirus relief bill, which is expected to be a $1 trillion package.

According to Buchanan, the number of nonfatal overdoses also rose from 88 in 2019 to 121 for the first six months of this year. The same figures in Manatee County, Florida, rose from 46 to 49 for fatal overdoses, and from 258 to 388 for nonfatal cases in the same period.

“The spike in drug overdoses in our region during the coronavirus pandemic is tragic and alarming,” said Buchanan.

“We have to get treatment to those in need both in Southwest Florida and across the country. As we continue to combat the coronavirus, we need to make sure we are addressing other health impacts exacerbated by this pandemic.”

A report titled “Projected Deaths of Despair from COVID-19” by the Graham Center (pdf) identified drugs to be one of the three causes of what it defines as “deaths of despair”—the other two being alcohol and suicide.

“Deaths of despair have been on the rise for the last decade, and in the context of COVID-19, deaths of despair should be seen as the epidemic within the pandemic,” the report states; it estimates potentially an additional 68,000 deaths to “despair” during the COVID-19 pandemic.

Officials in DuPage County, Illinois, a suburban area west of Chicago, issued a public safety announcement in early May that warned residents of an increase in overdose deaths, according to a report by the American Medical Association.

“In the past three weeks, we have had 20 overdose deaths, mainly due to opioids,” said Richard Jorgensen, M.D., the DuPage County coroner. “We do not know if this is due to a change in the makeup of the drugs, drug usage on the streets, or due to current COVID-19-related changes in society.”

Shelby County in Tennessee has reported 391 cases of suspected overdoses and 58 deaths between April 7 and May 7 alone. The AMA reports surges from Milwaukee County in Wisconsin and Franklin County in Ohio.

Spending time in isolation can affect the mental health of a person and increase the chances of the development and advancement of opioid addiction, according to AppleGate Recovery, an opioid addiction treatment service.

“Social support is closely tied to better treatment adherence and recovery outcomes. Similarly, being socially isolated while struggling with addiction makes the condition worse in a number of ways,” AppleGate stated in a commentary.

Miller says the “uncertainty, fear, and dread” due to social isolation and economic downtown have exacerbated the situation; he points out that the effects differ in different communities.

“Based on the last available data from the CDC, our country had been making progress on opioids, with a slight decline in deaths to opioids,” he said. “However, early data from 2020 shows that drug overdose may be again on the rise, putting many of the improvements at risk of being undone—and the progress is incredibly uneven—with American Indians, Asians, Blacks, Latinos, and older adults all experiencing increases in drug-induced deaths recently.”

The escalation of the opioid epidemic due to the Chinese Communist Party (CCP) virus pandemic has increased isolation and decreased access to opioid treatment, according to a report published in The American Journal of Managed Care (AJMC) in July.

“COVID-19-related protective shelter-in-place orders have pushed individuals battling sobriety into isolation and have decreased access to treatment and opportunity for a distraction from addictions,” the report says. “The addiction community is raising alarms that the current epidemiological climate alone is a risk factor for substance abuse relapse.”

The American Society of Addiction Medicine (ASAM) also says the pandemic has decreased access to treatment as the community programs themselves remain at risk.

“Communities and treatment programs across the country remain at risk for increasing population prevalence over time,” the ASAM said in its guidance to the Opioid Treatment Programs (OTPs) that makes the “Take Home Medication” for OTPs more flexible.

The AMA appreciated the increased flexibility that involves providing buprenorphine and methadone to patients with opioid use disorder; both of these are approved drugs for opioid withdrawal symptoms.

“The AMA is further pleased at increased flexibility provided by the DEA to help patients with pain obtain necessary medications,” it said, further urging governors and state legislatures to take action.

Buchanan, whose Fentanyl Sanctions Act (H.R. 2226) was signed into a law as part of the National Defense Authorization Act last year, says it’s important to address the health concerns exacerbated by the CCP virus pandemic.

“The opioid crisis has destroyed too many families and lives. We cannot forget about this crisis even during the coronavirus pandemic,” he said.