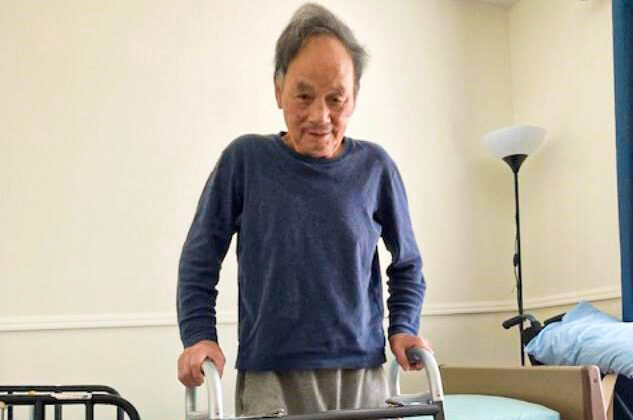 Mr. Sun Ng, at his daughter's home, after having been administered ivermectin treatments for COVID-19 in early November. (Tom Ciesielka)
High-profile cases

An elderly COVID-19 patient has recovered after a court order allowed him to be treated with ivermectin, despite objections from the hospital in which he was staying, according to the family’s attorney.

After an Illinois hospital insisted on administering expensive remdesivir to the patient and the treatment failed, his life was saved after a court ordered that an outside medical doctor be allowed to use the inexpensive ivermectin to treat him, over the hospital’s strenuous objections.

Ivermectin tablets have been approved by the U.S. Food and Drug Administration (FDA) to treat humans with intestinal strongyloidiasis and onchocerciasis, two conditions caused by parasitic worms. Some topical forms of ivermectin have been approved to treat external parasites such as head lice and for skin conditions such as rosacea. The drug is also approved for use on animals.

Remdesivir has been given emergency use authorization by the FDA for treating certain categories of human patients that have been hospitalized with COVID-19. But the use of ivermectin to treat humans suffering from COVID-19 has become controversial because the FDA hasn’t approved its so-called off-label use to treat the disease, which is caused by the CCP virus also known as SARS-CoV-2.

Critics have long accused the FDA of dragging its heels and being dangerously over-cautious and indifferent to human suffering in its approach to regulating pharmaceuticals, a criticism that led to then-President Donald Trump signing the Right to Try Act in May 2018. The law, according to the FDA, “is another way for patients who have been diagnosed with life-threatening diseases or conditions who have tried all approved treatment options and who are unable to participate in a clinical trial to access certain unapproved treatments.”

Medical doctors are free to prescribe ivermectin to treat COVID-19, even though the FDA claims that its off-label use could be harmful in some circumstances. Clinical human trials of the drug for use against COVID-19 are currently in progress, according to the agency.

The drug “most definitely” saved the elderly patient’s life “because his condition changed right immediately after he took ivermectin,” attorney for the family, Kirstin M. Erickson of Chicago-based Mauck and Baker, told The Epoch Times.

Sun Ng, 71, who was visiting the United States from Hong Kong to celebrate his granddaughter’s first birthday, became ill with COVID-19 and within days was close to death. He was hospitalized on Oct. 14 at Edward Hospital, in Naperville, Illinois, a part of the Edward-Elmhurst Health system. His condition worsened dramatically and he was intubated and placed on a ventilator a few days later.

Ng’s only child, Man Kwan Ng, who holds a doctoral degree in mechanical engineering, did her own research and decided that her father should take ivermectin, which some medical doctors believe is effective against COVID-19, despite the FDA’s guidance to the contrary.

The daughter went to court on her father’s behalf and on Nov. 1, Judge Paul M. Fullerton of the Circuit Court of DuPage County granted a temporary restraining order requiring the hospital to allow ivermectin to be given to the patient. The hospital refused to comply with the court order.

At a subsequent court hearing on Nov. 5, Fullerton said one physician who testified described Sun Ng as “basically on his death bed,” with a mere 10 to 15 percent chance of survival. Ivermectin can have minor side effects such as dizziness, itchy skin, and diarrhea at the dosage suggested for Ng, but the “risks of these side effects are so minimal that Mr. Ng’s current situation outweighs that risk by one-hundredfold,” Fullerton said.

The judge issued a preliminary injunction that day directing the hospital to “immediately allow … temporary emergency privileges” to Ng’s physician, Dr. Alan Bain, “solely to administer Ivermectin to this patient.”

The hospital resisted the order on Nov. 6 and 7, denying Bain access to his patient. The hospital claimed that it couldn’t let Bain in because he wasn’t vaccinated against COVID-19 and that its chief medical officer wasn’t available to “proctor” Bain administering ivermectin.

The daughter’s attorneys filed an emergency report with the court on Nov. 8 and Fullerton heard from both sides. The judge admonished the hospital and restated that it must allow Bain inside over a period of 15 days to do his job. When the hospital filed a motion to stay the order, Fullerton denied it, again directing the facility to comply.

The ivermectin appears to have worked, and Sun Ng has recovered from COVID-19. He was discharged by the hospital on Nov. 27.

“My father’s recovery is amazing,” his daughter, Man Kwan Ng, said in a statement.

“My father is a tough man. He was working so hard to survive, and of course, with God’s holding hands. He weaned off oxygen about three days after moving out of the ICU. He started oral feeding before hospital discharge. He returned home without carrying a bottle of oxygen and a feeding tube installed to his stomach. He can now stand with a walker at the bedside and practice stepping. After being sedated for a month on a ventilator in ICU, his performance is beyond our expectations. Praise the Lord.”

“We get calls from all over the place,” she told The Epoch Times. “People that want to sue hospitals after someone’s passed, they wanted to get the medicine and couldn’t. Obviously, that’s a different, difficult case because a medical malpractice case is very difficult.”

People just want to do what’s best for their family members and “find ivermectin themselves” and have it on hand “and use it when someone starts to develop symptoms,” Erickson said.

She said her legal team and client were “really thankful” that Ng recovered and “we salute” Judge Fullerton, Dr. Bain, and others, as well as the hospital for abiding by the court order in the end.

For more information on ivermectin and how to obtain it, Erickson said people should visit the website of the Front Line COVID-19 Critical Care Alliance at Covid19CriticalCare.com.

“We’re not able to comment due to patient privacy guidelines,” he told The Epoch Times by email.